With two seasons of 'In the Dark' streaming on Netflix, now's the time to cast a light on your next guilty pleasure...

Murphy Mason (Perry Matfeld) is a hard-drinking, bed-hopping young woman who carpe’s the hell out of the diem if she doesn’t simply sleep through it. After losing her sight as a girl, she’s become accustomed in sliding by, not wanting an ounce of pity for her disability but willing to exploit it if it makes the day easier. She has a job at her adoptive parents’ animal shelter, Guiding Hope, when she bothers to turn up, but her friends are limited to her tolerant room-mate Jess (Brooke Markham) and a young drug-dealer called Tyson (Thamela Mpumlwana), a teenager simply looking to get out of his ‘career’ choice for better things… and  who saved her from a violent assault months before.

One night, looking for a sympathetic ear, she finds Tyson’s slumped body in the alley where they usually sit and chat – but when the police search the area they find nothing – not a sign of anyone. In fact, investigating detective Dean Riley (Rich Sommer) seems to think Tyson has probably just absconded – which is what everyone else is telling Murphy as well. But Murphy is determined to find the truth and to make sure one of the few people she’s ever cared about is not swept up in a pile of discarded paperwork.

Falling for the charms of Max Parish (Casey Deidrick) – a low-level money-launderer for Tyson’s cousin, Darnell (Keston John) – Murphy, Jess and Max, with help and hinderance from Murphy’s Guiding Hope work-mate Felix (Morgan Krantz), try and avoid the wrath of those who would rather that Tyson’s disappearance go unsolved.

But even as it becomes clear a crime has occurred, it seems everyone has agendas and secrets. Murphy, famous for making a mess of things at the best of times, could be about to excel herself… if she doesn’t get herself or others killed in the process…

Some shows try incredibly hard to be relevant while others do it far more organically and In the Dark – currently streaming its two seasons to date on Netflix, is a series that proves to be a diamond in the rough. It’s undoubtedly snarky yet somehow simultaneously sentimental, dark but with flashes or warmth and both deadly serious and insanely funny in turns… and  – most importantly – makes us root for the most unlikely of heroes, even when they’re not being that heroic.

There was some initial criticism of having a person without a disability playing someone who has one. One suspects that while that might have been an ideal opportunity for such, the practicalities of a rough-and-tumble show mean that was logistically unlikely. However Perry Mattfeld convincingly masters the gait and gaze of someone without sight – gracefully clumsy in the certain way that a talented dance-trained performer can.   Mattfeld – looking like a younger Kate Walsh / Jennifer Aniston – also achieves the equally difficult task of being a central character of which we can simultaneously cheer and despair. She makes Murphy sympathetic and antagonistic, a walking disaster-area who can be selfish and self-absorbed but also loyal to a San Andreas-sized fault when it comes to the rare people who matter to her.

One of the secret weapons here is Brooke Markham as Murphy’s best friend Jess. A role that could have, in less resolute hands, been written and played as a traditional side-kick – a Velma to a Xanax’d-out Daphne, becomes the heart-and-soul of the show. Jess may be wonderfully awkward and outwardly far less confident than her room-mate, but she’s equally fearless when it counts and as the show makes its way through its two seasons, Jess is arguably the person you’d want as your friend more than Murphy, even when she somehow enables her. The fact that she is gay isn’t irrelevant, but neither is it ‘designated character trait’ ™ and is met with the same heart, pathos and irreverence as anything else.  Morgan Krantz as Felix steadily moves from being just the annoying rule-following administrator that you might find in a sit-com – there to be the subject of ridicule at Guiding Hope – to being an endearingly annoying rule-follower and sometimes sympathetic partner-in-crime as the two series progress.    Thamela Mpumlwana, as Tyson makes an impact in flash-back scenes of the first season. The likes of Casey Deidrick as petty criminal and complicating love interest Max and Keston John as less petty-criminal Darnell also prove important to the story-arc.

Elsewhere Rich Sommer as investigating officer Dean Riley and his blind daughter Chloe (Calle Walton, who is genuinely blind) make a significant impact on Murphy’s world, though ultimately complicating it in unexpected ways. In a sense, it’s Walton’s Chloe that indirectly affects Murphy’s life as much as Tyson, forcing Murphy to be more responsible and sympathetic than she’s had to be before and played with scene-stealing charm by the young actor in her first notable role.

In the Dark isn’t perfect – there are contrivances and some suspension of disbelief that you’ll have to occasionally ignore or accept if you’re going to fully invest – especially as the series careers into its second season – but they’re delivered with such aplomb by the talented cast and sharp writing that both the unlikely and the formulaic aspects merge into a satisfying whole. Nor is the series truly ground-breaking – it’s fair to say that it wears certain obvious inspirations on its sleeve, thriving not so much on being original but being derivative with a twist. Bringing their experience in front of the camera to bear, the likes of Kyra Sedgwick and John Francis Daley  prove good directorial choices.

So far there have been two seasons of In the Dark (both now available on Netflix) with a third given the go-ahead for production this year for a 2021 run (COVID permitting). Arguably the first season is more organic and quietly heartfelt than the follow-up, though the second season is definitely more ambitious with its plate-balancing plot and multi-peril antagonists, huge fun and angst-filled if not always as believable. But there’s every chance you’ll end up binge-watching the two runs as quickly as possible and assigning it as your new guilty pleasure. 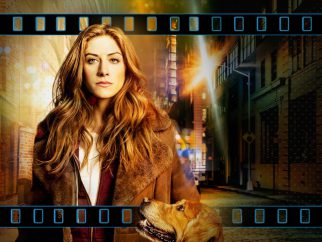 Cease and DC’d? Could COVID woes decimate the comics publisher?