Justice League isn't as bad as some might have feared, but neither does it feel as well-crafted as its Marvel ensemble counterpart...

Superman is dead, killed at the hands of Doomsday and General Zod and leaving Bruce Wayne feeling somewhat responsible for his demise and the fight that preceded it. Believing that the entire planet may be facing an apocalyptic threat in the near future, Bruce and Diana Prince (Wonder Woman) decide to bring together a team that they hope will do the Man of Steel’s legacy proud – or at least help them survive.

But as an extraterrestrial force begins to make its presence felt, seeking out three legendary boxes of power, it quickly becomes clear that even the combined efforts of Batman, Wonder Woman, a teenage speedster called The Flash, the amphibious Aquaman and a part-machine Cyborg may not be enough to save the day. If that’s the case, Bruce considers one last gambit – but will that be enough… or could they unleash an even greater threat?

There’s no escaping the comparisons that will be – and have to be – drawn between Marvel‘s Avengers and DC/Warners’ Justice League. Both are lines in the ensemble sand, depicting super-teams forced to come together, despite reservations, to fight a greater menace and for a slice of greater box-office. But if the Avengers  radiate vivid multi-coloured, quick-quipping hope then the start of Justice League positively revels in its despondency and muted greys. As Sigrid’s wailing version of Leonard Cohen’s ‘Everybody Knows…’ sets the global scene, we’re given a world with no Superman and less hope. All the mourning black shrouds covering international landmarks can’t hide that street-level crime is on the increase and that none of the heroes left behind can really fill his boots. Bruce Wayne’s butler Alfred bemoans  that he no longer recognises the world outside his windows and misses the day when all his caped crusader employer had to contend with was wind-up penguins.

Though the bombastic Zack Snyder was largely at the helm, it was Joss Whedon helped pen the story and stepped in for some additional filming duties when Snyder suffered a family tragedy. It’s not that difficult to guess which scenes were added or altered later. The fact that the original cut for the film is said to be close to three hours long points to some of the problems the finished piece has. Marvel’s solo outings carefully set the scene for the Avengers, but it’s something of the opposite case for DC’s super-team and though we’ve met Batman and Wonder Woman (and the late, great Superman) already, a majority of the team need to have their back-stories incorporated which eats up a lot of the first act. Some of those threads, loosely intertwined at best, work better than others.

Ben Affleck is fine as Bruce Wayne, having noted that it’s the sardonic billionnaire you have to get right rather than his alter-ego and Gil Gadot’s Wonder Woman established a firm enough presence in her solo-outing to sail through this largely unscathed. Jason Momoa’s Aquaman overcompensates in the efforts to eradicate the camp tangerine-t-shirt image of comics past but is essentially given the job of channeling testosterone and machismo. Finding Nemo had more briney depth, but it’s a case of never mind the quality, feel the bravado.  Ezra Miller gives us a quippy Barry Allen / The Flash, essentially the motor-mouthed comic-relief and just about stays the right side of annoying (though it’s a close-call). Ray Fisher’s Cyborg is fine, managing to act his way out of the exo-skeleton effects needed.

Much has been made of the fact that Henry Cavill came back from shooting the new Mission Impossible movie to film extra footage – but did so complete with a Kryptonian caterpillar perched firmly under his nose – so, the mission, should they choose to accept it was for the Justice CGI department to remove the offending moustache. The trouble is that with the news of the trimming being so wide-spread, the audience is on the look-out and the result is not as good as it should be, the Man of Steel’s boy scout demeanour showing a stiffer upper lip than usual.

A super-team needs a super-enemy and sadly all they get is a derivative one-note bad guy in the form of Steppenwolf. (If that name reminds anyone of  sounds like a soft-rock band, then it’s worth noting he has the same amount of impact and longevity). Another of the CGI-created ilk of villains who posture and pose, snarl and sneer but never really DO anything of interest, Steppenwolf is as bland in the boom-and-bust brigade as they come and it’s likely that if an audience was asked to relate his back-story and main motivations they’d probably have trouble before they got to the parking-lot. Equally, the film’s Unity Boxes super-weapons are vague handwavery maguffins equivalent to the Infinity Gems of the Marvel Universe, but – like the film – cursed with less pigment.

There’s able support given by Amy Adams, Diane Lane and Jeremy Irons, given just enough dialogue and supplementary scenes to make one wish we’d seen more of them and less of the now generic collateral damage going on around them.

With its below-$100 million opening, it’s impossible to know whether the Snyder/Whedon collaboration helped or hindered the finished result. Better than Batman Vs Superman, it is neither as bad as it could have been or as good as some better groundwork would have allowed: League doesn’t quite do justice to its many parts and is best described as Thor: The Dark World on a creative level, the Avengers on a budget level… and a moustache-removal on a ‘Special Eddy’s 2-1 Weekend Offer’ level. 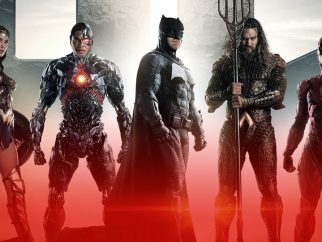