It's the end of Asgard, but the latest 'Thor' is less 'apocalypse now' and more 'romp and circumstance'...

Thor (Chris Hemsworth) hangs from the ceiling, captured in a net and relating his recent adventures to a skeleton who at least has the courtesy to have his jaw actually drop. But the God of Thunder’s imprisonment is quickly revealed as a ruse to bring him face to face with an ancient opponent.

However, things are about to go from bad to worse. Returning to Asgard, Thor finds more duplicity in the halls of power and has just enough time to tick-off Loki (Tom Hiddleston) and bid farewell to Odin (Anthony Hopkins)before a previously unknown sibling, Hela (Cate Blanchett) uses the current state-of-play to return to claim her birth-right.

Banished into the cosmos, Thor finds himself captured once more, this time forced to fight in a cosmic arena by the Grandmaster (Jeff Goldblum). His opponent is a familiar shade of green (Mark Ruffalo’s Hulk), but can Thor unite old friends and adversaries in an attempt to claim Asgard back from edge of Death?

Though this is the third Thor ‘solo’ outing, it’s the first entry to resolutely stay away from Earth/Midgard (a passing reference is made to Jane Foster being an ‘ex’ and Scarlett Johansson has a pre-recorded reference to the events of the most recent Hulk-less Avengers movie) but in doing so, it somewhat loses an anchor, adrift in a galaxy of somewhat surprising giddiness.

While there’s no doubt that ‘fun’ is the operative word here – and it’s wall-wall craziness, to be sure –  there does seem to be the feeling that the Raganrok cast are essentially goofing off, revelling in the in-jokes and obvious camaraderie rather than on a plot that fails to remotely hold together. Never mind the apocalypse – time for some green penis jokes! Essentially the latest Thor is a series of sketches fuelled by fan-boy easter-eggs and a hapless if harmless momentum that sends it spiralling towards a climax put together in a computer rather than soundstage. An early scene in which some very familiar faces from an Asgardian amateur dramatic society (Az-Am-Dram?) posit a Loki-friendly version of recent events, sets the tone for the subsequent self-deprecating slapstick and eye-rolling.

Flitting between the Grandmaster’s gladatorial world  and the under-siege Asgard, the action is firmly of the stylised variety, the camera slowing down and twirling around the opponents as they pose and strut. It’s not that the style isn’t effective, but once it becomes a singular template for the punctuating punches, familiarity breeds a bit of boredom: it’s all very pretty, but it’s hard to care about pixels more than people.

There’s performances a’plenty but no real acting on show. Hemsworth can now portray Thor in his sleep, Ruffalo’s Banner is the overtly nebbish straight man of  the cosmic road-movie called on to do little more than produce over-the-top fretting. (There have been people wanting a Hulk solo-movie for years, but  though Ruffalo is the best actor to date to give life to the jade giant, this is proof-positive that less is more). Even the reliable Tom Hiddleston leans somewhat heavily on Loki’s past glories, predictably duplicitous in pantomime proportions (though his silent reaction to the appearance of the Hulk and memories of ‘smashings’ past is nicely underplayed). Cate Blanchett takes every opportunity to chew the scenery but her Goddess of Death is more like a a Goth with a cold, an under-developed baddie called on to posture and snark but little else. Jeff Goldblum essentially channels a neon-hued, version of himself, a day-glo’d go-to persona he has honed and duplicated a little too often through major movies (with only minor variations) and nowhere  to be as refreshing as it once was.

Evaluating Raganrok as anything more than disposable fluff and silly fun, it’s easy to come across as an over-serious cosmic curmudgeon. Go in wanting a loud, busy romp through the Marvel universe and that’s exactly what you’ll get… complete with visits from Doctor Strange and others. Strictly on autopilot, the film absolutely fulfills its remit to make you grin and make Guardians of the Galaxy look like War and Peace. A high-budget effort best channelled through beer-and-pizza, the only real complaint is that it’s a loud but lazy two hours and not the epic we might have expected. After all, Raganrok is supposed to be the end of the gods, so one would expect some sturm und drang to balance things out – however there’s a real lack of specific gravity here. A raft of supporting players are killed on-screen. In previous installments their demise would have been met with actual weight and moments of solemn angst – but here it’s a punchline or incidental footnote – met with an ambivalence determined to not spoil the mood and with reluctant amounts of screen-time never mind actual lines.

There’s genuine laughs here and only a hardened Frost Giant wouldn’t give in to a smile and chuckle, but it’s also a self-indulgent mess, a food-fight not a banquet. 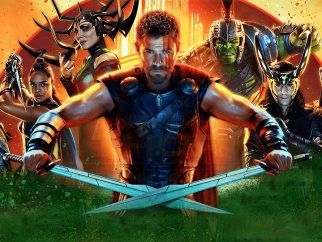