For a film about aliens, the latest Men in Black, content to race around the Earth in casual attire...

Years ago, an alien encounter saw a young girl named Molly witness an alien visitor. The usually efficient Men in Black make sure her parents’ are neuralised so that they won’t remember the event, but Molly – who’s supposed to be asleep – doesn’t get the mind-wipe… and so begins a decade  of her honing her talents and intuition to track down the organisation she glimpsed and get a better understanding of the universe. Normally, job interviews go as expected, employers admiring her credentials but cutting her loose as soon as the extra-terrestrial discussions begin, but when Molly (Tessa Thompson) and her hacking skills track a ship entering the Earth’s atmosphere, she gets to the landing-site and – having ‘suited’ up just in time, infiltrates the MIB team.

Such an organisation is not easily subverted but Molly manages to convince MIB’s London boss High T (Liam Neeson) and US counterpart Agent O (Emma Thompson) she’d be a genuine asset to the MIB agency. As a provisional ‘Agent M’ she manages to get partnered up with Agent H (Chris Hemsworth) who is the resident heart-throb, though his hero status seems to come more from him clumsily saving the day than a well-executed regime.

However, just as a new threat to Earth rises, Molly learns there may be a mole in the organisation…

It’s worth saying from the outset that there’s nothing inherently wrong with the idea at the heart of MIB international, indeed, if there’d never been an original trilogy, then this movie might well have been scoring considerably higher marks. But there was and each of those previous three chapters felt tighter and more organic than this latest offering which pays lip-service to the organisation and some of the inherent visual gags, but otherwise feels somewhat alienated from its source material. Perhaps it was the immediate chemistry between Will Smith and Tommy Lee Jones – stories that played to their strengths and their personas – that were just as important as the special-effects. But this latest entry, with everyone ably giving it their all, still feels like them servicing an already-penned script – and one that all too often feels  like someone took a Mission Impossible screenplay and said ‘Ooh, ooh… what if we add more jokes and they have to face aliens this time?‘

The stoic demeanour, the suits and the sunglasses are all iconic to the concept and the movies and so losing them for a good third or more of the running-time immediately downgrades the…. well, spectacle. And unless I’m forgetting something, the neuralyzer, so important to previous plots and the whole idea of deniability, is largely absent after the first few set-up scenes as well, with chaos raining down and most of the clear-up done by damage-control off-screen. The result is a formulaic buddy-movie with summer tentpole hopes, but little to distinguish it from a myriad menagerie of other exotic offerings this season. Where once the sfx set-pieces and alien designs were largely surprising and subversively clever, they’re now derivative and have more shine than substance.  Hemsworth and Thompson worked together well in the MCU‘s Thor movies, but ‘determined female warrior’ and ‘wise-cracking thunder god’ are not exactly a hammer’s throw from the character-traits given to them here (indeed, there’s even a hammer joke in there). Hemsworth has long since mastered easy-charm, but here is all machismo and over self-assured, flippant and casual without actually being half as charming as the character and the script seems to think he is – an element that irks, even after a partial-explanation late in the day.  Thompson, often seen in supporting roles, seizes centre-stage with both hands and does a good job with what she’s given, but after establishing her go-getter credentials, the role of Molly becomes somewhat cookie-cutterish in execution and misses an opportunity on expanding her backstory further.

Liam Neeson as the European arm of MIB command has a particular set of skills: essentially getting to blandly bark orders and forgive ‘H’ for screw-ups on a regular basis and discounting some CGI for a key scene, doesn’t really get in on any of the action except in an observer capacity. Emma Thompson, fun though she is here in sharp headmistress-type-form, is essentially a wasted cameo, though she handles the inevitable ‘MEN in black?‘ question with a brief but great ‘Don’t get me started‘…  Rebecca Ferguson as an alien arms-dealer with extra limbs (geddit?) could also have been significant but is equally under-used and dressed as if the costume budget ran out unexpectedly, subsequently shoved into a sparkly, unconvincing disco-era wig that threatens to slide off at any moment. The two bad guys causing havoc – firing energy and then annoyingly turning into smoke whenever there’s return fire –  are played by Laurent and Larry Bourgeois otherwise known as the performance act ‘Les Twins‘. Being threatened by a French dance troupe kinda sets the wrong level of intimidation, n’est pas? What next mime-fields?

Director F. Gary Gray (who did far better with the likes of The Negotiator, far worse with Law Abiding Citizen and about the same with travel-documentary for car enthusiasts The Fate of the Furious) delivers the basics. The mole story is painfully obvious from the outset and green-screen gets the biggest salary. Again,  there’s nothing ‘wrong’ if you’re going in wanting a silly sfx-driven romp delivered as the camera and cast race through a few exotic, but strangely uninspiring locations… but as a MIB chapter it simply feels glossy but lazy – a more-is-less opportunistic travel snack from the same cookbook with lots of vivid icing on it, but none of the actual sweet taste. 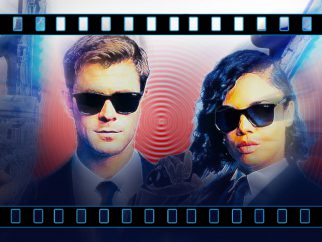