What the duck? The latest and lighter 'What If..?' Ragnarok'n'rolls across the screen with tongue in cheek...

Though half-brother Loki has been the proverbial thorn in the side of the God of Thunder he was also a factor in Thor learning to balance his love of the broth-spilling party-life with his general godly responsibilities. In another reality, denied that influence, Thor has no reason to be anything other than a cosmic frat-boy who parties from planet to planet and decides that while Odin sleeps, he’ll avoid his mother Frigga and hide out on Midgard / Earth. Hiding out, it seems, means organising the biggest party the planet has ever seen and avoiding the response from SHIELD, determined to stop the chaos.

But as the forces commanded by party-pooper Maria Hill seem ready to nuke Thor if necessary, Jane Foster may have found a far more subtle way to resolve the matter…

Neither a fully ‘Excellent Adventure‘ not a complete ‘Bogus Journey‘, the latest outing with Thor certainly wants to party on from beer to eternity.

With all the doom and gloom of recent installments in the What If..? pantheon, it’s perhaps something of a relief to find an entry that isn’t meant to be taken very seriously… or at least, not until it’s final seconds… (but more of that later). Your appreciation of the episode may well depend on your attitude going in. More comic than cosmic, it’s also more akin to Bill & Ted… than any kind of Infinity War, this is a wacky chapter and meant to be viewed with complimentary beer and pizza. In-jokes and one-liners fly fast and there’s a decent beer-goggles type charm to the chaos that ensues.

The title – What If… Thor Were an Only Child? – is a little misleading. Thor isn’t technically an only child. Loki is still his half-brother but not raised together (and no mention of Hela), but Loki was returned to the Ice Giants as a baby and some diplomacy seems to have been reached. Thor and Loki are buddies of sorts, moving in the same circles with no animosity and a desire for the kind of chaos that comes not from malicious power-grans but keg runs.

The list of returning actors as party guests  is expansive. Hemsworth and Hiddleston reprise Thor and Loki and, somewhat surprisingly, even Natalie Portman has been enticed back as Jane Foster, actually giving her character far more range than all her previous appearances. Kat Dennings riffs her way through her return as Darcy and ends up with some matrimonial offers placed on the bill. The screen is awash with cameos and easter eggs. Most of the Guardians of the Galaxy appear in one form or another, Jeff Goldblum’s Grandmaster is a DJ and Samuel l. Jackson gets one scene as Nick Fury . But that voice-cast list is once again eclectic with some actors reprising their live-action roles for little more than one or two lines and yet other more prominent roles being replaced.  There’s Karen Gillan as Nebula, Clark Gregg as Coulson, Seth Green as Howard the Duck, Cobie Smulders as Maria Hill, Jaimie Alexander as Sif, Taika Waititi as Korg, Frank Grillo as Brock Rumlow and believe it or not, that really is Clancy Brown back for a handful of words as Surtur. But it’s Alexandra Daniels assuming the key role of Carol Danvers / Captain Marvel instead of Brie Larson (but still does an excellent job) and a more clipped Josette Eales takes the role of Frigga from Rene Russo

Animation-wise, the action is fine and feels kinetic in the action sequence and very ‘Where’s Waldo?‘ in the part-scenes. Captain Marvel is on-point and various cameos are mostly on the mark, echoing their live-action counterparts – though ironically, Thor and Jane Foster are more loosely interpreted facially than the rest of the ensemble. Mjilnor is supposedly to be enchanted, only able to be used by those who are ‘worthy’ and it’s doubtful that this version of  Thor is even close to that benchmark, but perhaps things worked differently here because even though the uber-strong captain can’t lift it, Thor has no problem in spinning it as a means of attack and propulsion. the fight between Thor and captain Marvel, two of the MCU’s biggest heavy-hitters should be truly epic, but instead it settles for fun and flippant with a large number of blows traded but just as many prat-falls.

In the final moments, Thor and Jane’s ‘Happy Ever After…‘ moment seems ruined by the arrival of a form that looks to be a mixture of Ultron, the Vision and the Infinity Gauntlet itself which is so abstract that it certainly gives more credence to the rumour springing from a recent teaser that the final chapter of this season will pick up on threads previously shown, tying them together in some way.

For what it is – a silly but fun romp that the cast are clearly enjoying – the fuller episode all works okay, but by its end it makes Ragnarok look positively sedate by comparison… 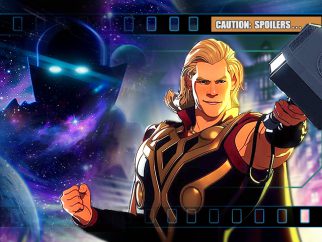 8
'What If... Thor Were an Only Child?' (Disney+ review)
Tags
Captain MarvelDisneyMarvelThor
Categories
DISNEY+ REVIEW
SHARE THIS ARTICLE
OLDER ARTICLE