The new addition to the NCIS franchise is fine to look at, but there's really nothing new on offer...

When a jet-fighter crashes into a Hawai’ian mountainside, Jane Tennant, the head of NCIS’s Pearl Harbor office has to leave her daughter’s baseball game to be flown from the playing-field to the site of the crash. There she has to fight  – very effectively – to assert control of the crime scene, but given that the pilot approached the team days before his death, there’s every reason to think the tragedy needs further investigation.

As the existing team welcomes a new agent Kai Holman (who has already run foul of local police officers), their investigation into the incident gets more and more complex and seems to tie in to a whole raft of Navy intelligence officers who may have, unknowingly, been involved in a honey-trap involving espionage.

With continued fights for jurisdiction from within the government, unwilling to share their confidential information, it’s clear that not all the immediate questions will get easy answers…

NCIS has, officially, been one of America’s greatest shows for years, still bringing in the top ratings after over eighteen years on the screen and a raft of (sometimes controversial) cast changes. It’s also established itself as a powerhouse franchise with NCIS: Los Angeles (returning for a thirteenth season early in October), NCIS: New Orleans (which finished its seventh and final run earlier this year) and now a new venue, NCIS: Hawai’i. (That’s not even mentioning the proposed fully-mobile NCIS: Red that ultimately didn’t go to a series).

The CBSverse is a complex one. NCIS has crossed over with its own sister-shows a number of times and NCIS: Los Angeles characters have already met some of the modern Hawaii Five-0 cast who in turn have met the modern Magnum who also met the modern MacGyver. Adding another NCIS to the roster, albeit with no immediate crossovers on the cards, merely ties in that existing ‘verse closer, but it’s also a monetary issue… CBS is likely to want three or more of its NCIS franchise on the schedules at any one time if it can trade on the popularity. (Interestingly, this is the first version of NCIS not to be launched from a ‘backdoor-pilot’ format. NCIS sprang from an introductory episode of JAG, both Los Angeles and New Orleans appeared in special  episodes of the parent show). This time, the only assistance is in the placing of the Hawai’i pilot, right after the first episode of NCIS‘  nineteenth season (the first time the original series has moved its own placing from the traditional Tuesday slot to form a ‘block’ on new night Mondays)

And, make no mistake, that comma in the Hawai’i title – added after initial publicity – is important. Spelling the location correctly, rather than the non-comma variation often used, is a statement of intent for the show to be grounded in the geography and culture of the islands. In that regard, there’s nothing wrong with NCIS: Hawai’i, but there’s also nothing very remarkable despite a few technical ‘firsts’ regarding gender and sexuality. The dialogue is okay, the acting is fine and the action satisfactory, but it’s a very familiar formula that tweaks some of the mix but not to any huge extent in the resulting tone. There’s some topical moments of racism  (two local white police officers seem a little eager to put the cuffs on new recruit Kai Holman when he questions they’re physical handling of an incident) and at least one gay recurring character that’s meant to be a surprise, but really isn’t. All pilots strain under the weight of character introductions and exposition. In less than organic ways, the script finds ways for characters to reel off facts about themselves and others, less for their sake, but more for the sake of the viewers. It flies against the ‘show don’t tell‘ maxim but it’s inevitable at such an early stage.

Exploring new locations and cultures can be the key to being ‘fresh’ – same successful format, different faces and backdrop. But given that Hawaii-Five-0 has only been off screens for a couple of seasons and Magnum is still going strong, there’s nothing incredibly new to say or show about the locale. Hawai’i remains a startlingly beautiful place to film and with a diverse population, but this pilot episode feels like it could easily be an episode of Five-0 (except it has more key ethnic characters on the team, something that show lost and was criticised for when Daniel Dae-Kim and Grace Park didn’t return after H50’s season seven due to disputes over pay parity with their fellow cast members).

The NCIS: Hawai’i cast are all fine, but predictable as archetypes and, off the cuff, you’re likely find it difficult to remember their names. Vanessa Lachey, an ex-Miss Teen USA and television presenter who’s guested in various shows over the years, gets her first lead role as Jane Tennant who runs the team. Lachey has a commanding presence, probably the best character/performance in the pilot and it’s good that we have a woman at the head of the show and field team – a single-mother but one who has been incredibly successful in her career. Alex Tarrant is the capable but more hot-headed new recruit, Kai,  locally-born but one who left for a career on the mainland and is now back on the island to help his estranged father. Noah Mills plays Jesse Boone, Tennant’s loyal second-in-command and a former homicide detective in Washington, DC.  Yasmine Al-Bustami plays Lucy Tara, the resourceful junior field agent with a possible secret of her own and Jason Antoon as Ernie Malik, the latest incarnation of the franchise’s default need for a ‘quirky’ cyber intelligence specialist. It also looks like Tori Anderson’s prickly Kate Whistler ( a Special Agent from the Defense Intelligence Agency) and Enver Gjokaj as Joe Milius ( a Navy Captain and Deputy Chief-of-Staff to Commander of the Pacific Fleet) will also be regular faces. Gjokaj is best known for the likes of Dollhouse and Agent Carter and it’s long past time someone gave him another show.

All this may be enough to keep existing NCIS fans tuned in and certainly it has all the ingredients to work in that regard. It took a while for NCIS: Los Angeles to find its own groove and it’s likely that CBS will give this newest chapter the time and budget to maximise its chances, but even so, with a lot of competition and many a show becoming a cookie-cutter brand, there’s no guarantees this will be a stand-out. 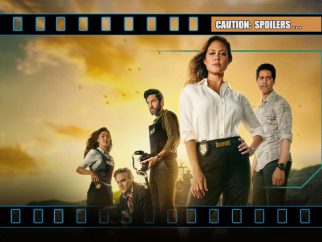