Hammered, not nailed down: Latest 'Thor' is less 'Rumble in the Jungle', more theological 'Mingle with a Jingle'...

Determined to go from dad-bod back to God-bod, Thor has regained his muscles but finds himself aimless – dumped by his fellow ‘Guardians of the Galaxy’ and still not sure of his new role in the universe. But as he and Korg return to new Asgard, the Odinson is shocked to find he’s no longer the only Thunder God in town. He’s even more shocked when the woman in the Asgardian armour turns out to be his ex, Jane Foster.

But will their reunion be short-lived? A pale figure with a very particular hatred for all gods is approaching and even the efforts of the Thors cannot keep the Asgardian children safe. If that wasn’t a hard enough challenge to face, it turns out that Jane is hiding a secret of her own and soon she’ll have to make a decision that will decide not just her own fate but that of Eternity itself…

In 2017 Taika Waititi impressively took the reins of Marvel ‘s Thor and, with the third film in the franchise, Ragnarok veered it off into unexpected territory: an irreverent, zany and often absurd vehicle that managed to blend massive set-pieces, kitsch backdrops and a pulsating soundtrack. Ragnarok and Roll, if you must. It was as if the mission statement read : “The Gods be Crazy! Cheer up! Let’s party!” and to a large extent, the audience agreed, grabbing mugs of mead as quickly as the box-office grabbed wallets. The rejuvenation of the character and the franchise played into the subsequent Avengers movies and indicated that superhero movies didn’t always have to be tackling the big angsty, decades-in-the-making issues, but must know how to be fun.

Waitiki’s return to the standalone Thor (though technically the premise of the new Love and Thunder is far from a singular Thunder God) was inevitable and all the expected ingredients are on show. The problem is that this time, despite the director’s unique and often compelling record, the reach of the film exceeds its grasp and with so many elements and conflicting tones, the result is less a spectacular romp and more of a glorious mess, fun but frivolous even when it tries to venture into darkness. It shoots and sometimes scores (the satire of a New Asgard commercialised for passing Norwegian cruise ships, the idea that the Thors’ weapons are as in-denial jealous of each other as the humans are and the sinister, cynical aspect of a killer hunting down vain glorious gods, smashing them like the false idols they seem to be) but it never quite has the courage to match its self-deprecating snark with substance, which is a shame because the potential is always there to do so.

Ragnarok boasted an in your face soft-rock soundtrack to rival the Guardians… mix-tape and Love and Thunder makes no apologies for its heavy rotational use of Guns and Roses tracks throughout, though there are times when it’s so reliant on the musical homaging that it’s less a ‘Rumble in the Jungle’ than a ‘Mingle with a Jingle’. The gathering of god-like creatures is one that sounds great on the page and should work on the screen, but rather than rise to the potential, it merely glides along to the beat of predictable punchlines and pratfalls, a deity-driven version of Ragnarok‘s own olympian arena sequence. Amid the CGI action and background theological in-jokes galore, Russell Crowe enjoys throwing lightning bolts and eating the scenery with an accent that certainly puts the kebab into the kerboom. This is a film that wants to be chaotic and silly with its deities in one scene and then have actual darkness and accountability for their actions in the next. Here, Wakiki (who managed to pull off that difficult tonal mix of comedy/empathy to Oscar-winning form in the likes of the superb JoJo Rabbit) simply can’t resist revelling in the technicolor absurdity of it all, but by the time we’re done (including a mid-credit sequence that undoes most of it anyway) the whole ‘Omnipotent City’ middle act lacks that sense of any real consequence and instead is just cosmic fluff and filler.

A few years ago the return of Natalie Portman to the franchise would have been unlikely. Though tactful, it was clear that as a talented and in-demand serious actor she’d grown bored with her purely supporting role after the first two Thor films and felt no need or pull to reprise Jane Foster. It’s easy to see why she changed her mind as Love and Thunder may not be Shakesperian in anything but some of the Asgardian pentameter, but it gives her much more to do. Taking another comics-arc to the screen, we find that Jane retains her acute scientific drive but has been diagnosed with cancer and that Thor’s off-the-cuff remark (during their montaged, previous courtship that fizzled out) about sacred hammer Mjolnir keeping her safe means that Foster feels a calling to where the pieces of the broken hammer now reside in new Asgard.  Magically restored, the hammer finds her worthy and has imbued her with all the power of the Norse God though we also learn that the boost also increases her body’s susceptibility to the cancer each time it manifests.  The irony is that what is saving her will also kill her. The film does reasonably well in drawing those difficult parallels and Portman plays Jane as neither perfect hero nor tragic victim, but a person determined to make the most of life. By the end you’ll want her to live, though  – ***major spoiler*** – the film gives her the predictable heroic death and a predictable after-credits reprieve of sorts. Again, with most Marvel mission-statements true consequence is subjective.

The meat of the piece comes with Christian Bale. Gorr, the God Killer is a role lifted from the recent comics arc and full of possibilities and in many of his scenes Bale channels a broken, poisoned man full of righteous anger, a person who devoted his life (and the lives of others) in service to a ‘God’ that, in reality, was never worthy of that worship. While you can’t condone him carving his way through the pantheon of vain cosmic beings in search of a reboot, it’s often possible to sympathise with that primal anger, though it’s ultimately distorted by the innate energy of the Necro Sword that possesses him and amplifies his wrath. When shown as a powerful but frail-looking puppeteer, a cloaked figure in the shadows of the battlefield or bathed in monochromatic menace, a character framed by the loss of a child but corrupted enough to use children as bait, Bale is great but every so often, the script and direction by Waititi insists on making him little more than a snarky ghoul with over-the-top banter and maniacal patter. He goes from sublime to ridiculous with a twitch of his emaciated neck and deprives us of what could have been a legendary antagonist (My wife found that character inconsistency the film’s most distracting disappointment and it’s hard to disagree).

Back on comedic ground, the Guardians of the Galaxy make a contractual appearance which is fun enough but reverses the original dynamic of them being enamoured with the cosmic Angel/Pirate over their actual ‘Captain’ Peter Quill and now they’re overtly glad to leave Thor behind as soon as possible, though the Thunder God chooses not to believe it in a one-joke that also ironically out-stays its welcome. There’s also plenty of cameos, both obvious and not. Kat Dennings and Stellan Skarsgård get brief one-scene appearances. Sam Neill (as Odin), Matt Damon (as Loki) and Luke Hemsworth (as Thor) all briefly reprise their am-dram theatrical takes on the main characters with the worst-kept secret (but the most fun) being Melissa McCarthy as a bargain-basement Hela. But scrutinise the credits even more closely and you’ll note that there are a few other Hemsworths in the mix: Chris’ wife, Elsa Pataky briefly appears the werewolf with whom Thor makes wild love on a giant she-wolf (don’t ask, don’t tell), his son Tristan plays a young Thor and his daughter India Rose plays the book-ending role as Gorr’s lost daughter. Taika Waititi’s children also play some of the kidnapped Asgardian kids. Tessa Thompson is fun as King Valkyrie and the sisterly scenes between Portman and Thompson don’t get as much screentime as they deserve. Jaimie Alexander single-handedly steals a battle-scarred scene and Wakiki also pulls double-time getting his rocks-off as the always delightful Korg. We shan’t even include the likes of Jeff Goldblum, Peter Dinklage and Lena Headey whose roles were ultimately trimmed out of the compact running time.

Though occasionally goat-powered, this Thor, despite its multiple mix and match title characters, certainly isn’t the GOAT of the franchise. In an effort to be all things, Thor: Love and Thunder doesn’t quite succeed or fail at any. Instead of starting out silly and getting steadily darker (which would have worked well) its grander-themed story-arc conflicts with a pub-crawl tone that bounces around like a cosmic pinball and can never settle on anything long enough to truly matter. The result is a glossy but disposable film that finds its frenetic pace early on but not a rudder. That being said, you’re likely to enjoy it as a diversion in the moment, even if it doesn’t stick with you long after. 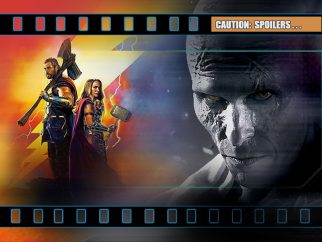