Bar Nun? Angels and demons appear to help and hinder the team... but are actual human beings worse?

When a building collapses it’s a tragedy for the neighbourhood but when it becomes apparent that several people have been guided to safety by a strange, angelic figure, the church sees it as an opportunity to verify it as something holy in the next step of its plan for a beatification. However, the differences between the varying accounts also seem to cause some problems for a church that is infamously grounded in tradition imagery… something that frustrates David as he simultaneously tries to help Sister Andrea, who is being asked to leave her post due to Leland’s machinations.

Meanwhile Sheryl makes an unwelcome discovery about her boss and Kristen seeks to reassure her family that bad things aren’t about to happen.

But is she right?

While Evil is something of an atypical series, hard to pigeon-hole for those who haven’t already found and experienced its unique smarts, there’s probably an argument that The Angel of Warning is a good example of everything that the show manages to juggle – from heartfelt to horror, from satire to sacrament, forever zigging when you expect it to zag and if – sometimes – there may be a few too many balls in the air to manage – it still circles around to collect them later.

The Angel of Warning (which, now halfway through the run has switched from the ‘Demon’ in the title pattern, but for the second half of the run or just this week?) starts with a very cold open in some respects – the pragmatic aftermath of a horrendous tragedy in which a building has collapsed, likely killing everyone inside and a trauma centre having been set up to deal with those needing either superficial medical help or more substantial spiritual aid as they cope with loss of loved ones.  Industry legend Rockne S. O’Bannon’s writing carefully judges the raw emotion of such a situation with a subtle comedy in which David arrives not sure of what he’ll be asked to do and then everyone mistaking him for a plain-clothes police-officer and not a priest… and then offer observations that he’s not wearing his religious collar.  It soon becomes clear that there are actually a handful of survivors and they have individually strange but interlocking stories to tell – all having been guided out of the building separately by a glowing woman carrying a lamb.

It turns out that one of the people, Jessica (Madeline Wise who recently played Picard’s mother in the Trek series) is literally bearing false witness, there to muddy the waters with her ‘holy’ recollections but actually a pawn of Leland’s that he’s using to provide ammunition against Sister Andrea. It’s through our team’s hard work and due diligence that the deception is uncovered in time. However it’s also typical of the show that it uses strange phenomena as an entrance to the characters’ dilemmas rather than solving a mystery of the week. However importantly the vision of the woman in the building collapse seems to be – and whatever the truth about the honest survivors’ recollections – The Angel of Warning doesn’t really come to any firm conclusion and doesn’t really try to do so after the halfway mark. Subsequent episodes may well revisit this, especially with the idea that foreboding can be judged both scientifically and spiritually and there’ll be no shortage of problems in the weeks to come. (Should we fear for  mountain-climbing Andy Bouchard?)

Though it ultimately threads itself into aspects of the main story, Sister Andrea, who might arguably deserve her own show, is something of the ‘B’ story this week, facing a literal crucible of her own with the church apparently eager to send her on her way. Whether the church’s zeal to be rid of Sister Andrea is purely down to Leland’s machinations or simply a lumbering, red-tape heavy, risk-averse holy patriarchy whom she frequently shows little time for, it’s hard to say, but the tribunal is instantly dislikeable and blatantly hypocritical. But it’s to Sister Andrea’s credit that she won’t let David, acting as her representative, to use psychiatrist Kurt’s own visions of demons against him because it’s too personal for him and she won’t put him through that. But David does ultimately go the extra yard for her, realising that he has some cards to play of his own.  What has been woven into the story in a subtle way is how the church is happy with visions that bolster ratification of its potential white saints – the tradition from older books still maintaining a hold – but seems a little less eager about beatification when the subject is someone with a different skin pigment. The episode uses that distinction as a scalpel rather than a sledgehammer, with David, Sister Andrea and the audience all being presented with uncomfortable facts and questions about their preconceptions – even David is concerned about the lens through which he sees holy visions and their validity if they’re based on his own prejudices. Ultimately, David saves Sister Andrea’s tenure by placing his own job on the line, suddenly aware that being one of only three black priests ordained by the church in recent years is an asset the church uses to their advantage, so why shouldn’t he use it that way?  It works well, showing how the ‘race card’ gets used by different people in different ways, sometimes casually, sometimes specifically, sometimes pragmatically… but never without some consequence.

One of the signatures of the series is spotlighting Kristen’s domestic life and her daughters continue to delight, acting just as a young family do – as a stabling and chaotic influence at alternate turns. Kristen taking them outside to shout at the train that consistently distracts and frustrates them is one of those very mundane but magical moments of recognisable suburbia and it’s great that the series takes time to show Kristen as a fearless, edgy dissector of the profane but also a great mother. And how can we overlook Christine Lahti’s Sheryl finally getting in to talk to the top boss at her misinformation management job and seeing him as a literal goat-headed, multi-eyed, foul-smelling demon… to which only Leland will attest (everyone else apparently sees him as a little Liam Neeson-ish)? At times in the past the use of actual, interacting traditional demons/devils imagery has been something of a marmite situation, taking away from the nuance elsewhere, but if this episode is going to have every aspect of the show, it certainly doesn’t play it safe here!

All very strange and yet, as always, captivating and intriguing – covering all aspects of the scared and the profane from the smart to the ridiculous. And with news that the show has already been confirmed for a fourth run next year, one hopes the revelations on all levels continue… 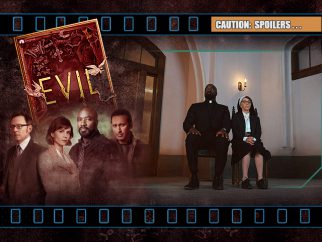