Captains, my Captains. SNW's nostalgic season finale has a focus on sacrifice...

The Enterprise is on a routine mission to help refit monitoring bases on the edge of the Neutral Zone, the area of space that buffers Federation space and that of the Romulan Empire. However, meeting with one of the outpost commanders, Pike meets the officer’s young son and realises that this child will grow up to be one of the fatalities in the horrific future event that Pike knows will end his own career seven years hence.  Until now, Pike has struggled with the foreknowledge of his own possible demise but now decides that he has no choice but to at least try and save the young man from his fate.

But time can not be so easily rewritten and before he can act, Pike encounters an emissary from that alternate timeline who warns of the ripple-effect of such a change and the massive consequences. Less than convinced, Pike is transported to a future where he and his crew survive the accident, but are instead plunged into a deadly confrontation. Can Captain Pike face down a balance of terror that another captain was supposed to face instead?

If the whole first season of Strange New Worlds has been a nuanced love-letter to The Original Series, then A Quality of Mercy, the final episode in the current run, seals it all with loving kiss that will likely be appreciated by both die-hard fans and more recent converts alike. Showing how well the series can turn on a dime between whimsy, action, adventure, pathos, tragedy and humour, this last episode of the run couldn’t be more different from last week’s ‘Alien‘ like outing, instead unapologetically going back to basics and being essentially pure, undiluted Star Trek.

While this ‘Tomorrow’s Enterprise‘ type story doesn’t quite have the wallop of, say, Yesterday’s Enterprise – which remains something of a yardstick and benchmark for the more modern part of the Trek franchise – it’s combining of Pike’s central dilemma and the altered, tweaked events of TOS‘s Balance of Terror certainly combines the core strengths and delivers them with panache and earnest style. Drawing parallels, sometimes shot-for-shot and with subtle audio echoes as well, with Balance of Terror, there are some framing and directorial choices that echo the source material. Cameras tilt, zoom in and hold in a way reminiscent of the 60s story in a way that might have looked to on-the-nose if deployed throughout the run but have been subsequently earned here.

Despite aspects of the meeting being inevitable in at least the longer term, bringing on a version of James T. Kirk was always a risky move in a series that despite its nostalgia, deliberately finds its pre-dated strength elsewhere. In a sleight of hand we knew that The Vampire Diaries‘ Paul Wesley  would be appearing in the role, but not this soon. Despite similarities, Pike and Kirk are different characters – the former is wry, by default collaborative and though willing to improvise and think outside the box as necessary is cut from traditional stock… the latter is just as good a captain but is more brash and impulsive, sometimes even eager to write the rulebook than follow it. To bring Kirk – destined to be the icon of the franchise – and place him alongside Pike – rapidly becoming a fan favourite – runs the risk of asking the audience to choose two possibly opposing forces. It’s more than a little like being asked to choose your favourite child or parent – it may produce artificial drama but rarely works well for the whole.

So it’s savvy and wise that the series knows that and manages to stylishly thread that needle, showing both men’s different approaches but not so much evaluating them against each other as pointing out one can never really know what the best path is or was, except in hindsight. Kirk is fighting to preserve survival – a perfectly reasonable reason – but Pike isn’t so much fighting to save his own life but to find a way to save the two doomed members of his future crew and it’s only that action that kickstarts events. The story plays out in a way that should actually favour Pike’s brand of diplomacy, a tactic that is only enhanced by Kirk’s support, even though he favours a different way. That the combined team come thatclose to avoiding their own ‘Kobayahsi Maru’ and getting the better, brighter future for everyone before its cruelly snatched away, is telling.

In some ways, this unique past-of-future-days future-nostalgia-trip season book-ender (complete with a Scotty cameo in audio only) draws a narrative line under the predestination aspect that has bubbled away, sometimes centre-stage sometimes quietly, since before this season even began: that if you had knowledge of your fate, wouldn’t it influence your every move between now and your date with destiny, that you’d make every primal effort to somehow avoid it? Pike and the series have somewhat vacillated on that ‘destiny’ aspect, pondering on whether it could be rewritten and with the added aspect of the audience knowing that it can’t (or isn’t likely to be) because of key, landmark events we’ve already seen in TOS, it’s been a bittersweet aspect that if indulged too much can be both dramatic and/or pointless. A Quality of Mercy addresses it head-on having the future version of Pike underline that classic Pike cannot, must not attempt to change the events because more is at stake than he can realise. The mechanics of that time-travel shouldn’t be scrutinised too much as they are the maguffin of the piece/peace, but it’s somewhat humbling – especially the universe telling you that your friend’s destiny is more important to the universe than your own… however it’s one that Pike now accepts with characteristic grace because he would never pass on his fate to someone else. (That said, there’s a whole lot of foresight that Pike now has on many issues – not least will be that he appears to retain knowledge of what the Romulans look and act like which he really shouldn’t have. That predestination thing… so complicated…)

The original (equally un-named) Romulan Commander in Balance of Terror was a pre-Sarek Mark Lenard and given some of the same dialogue we can suppose that this new version, played by Matthew MacFadzean, is the same character, instilling him a long-game attitude that makes an impact. It’s also good to see Wynonna Earp’s Melanie Scrofano back from the pilot, reprising her role as Captain Batel, Pike’s on-off romantic interest but an interesting character in her own right given the duties she has to perform. With somewhat darker or wearier future versions of some regulars, only regulars Jess Bush’s Nurse Chapel and Rebecca Romijn get shorter shrift with the briefest of scenes.

While the recent season of Picard went skating hither and yon through continuity with reckless abandon, this season finale is an ode to more caution. The series leaves us with normal continuity restored but Number One arrested for deception about her genetic llyrian origins – another thread that was left hanging early in the run. However genial we might often find Pike and his efforts of diplomacy, one suspects we’re now going to see an extension and a different branch of how effective he can be in defending his own over himself… so, no, definitely, this isn’t over. 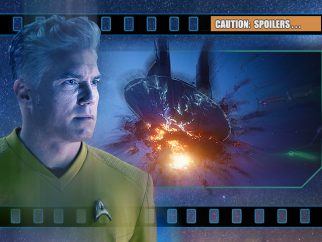