Caleb and maeve search for answers but as the stakes get higher, should they leave 'Well Enough Alone'...

Caleb and Maeve get pro-active as they look for answers into what William may be planning, but when they uncover that Charlotte is involved in pulling the strings, the mission becomes even more dangerous and urgent. In the seven years since the riots, what has she been planning and how is that plan evolving?  Meanwhile that ‘Man in Black’ continues to intimidate, initiating a confrontation with the Vice President that is certainly above par.

And Christina continues to ask questions about her stalker. If he died, penniless, mere days ago, how is there already a long-standing memorial wing named after him at a local psychiatric hospital?

It may well be down to the labrynthian nature of previous seasons, but two episodes in to the latest run of Westworld and while many elements remain shrouded in mystery and slow reveals, the structure and the journey feels far more conventional…. even, dare one say it, linear and comprehensible?  That’s a double-edged sword as that element was both infuriating and one of the things that set Westworld apart from other shows in the past. You always had to admire its ambition even if the result was a little too proud of itself. You might have expected something wilder and post-apocalyptic after the virtual battle with super-computer Rehoboam at the end of Season Three and the world-order teetering on the brink, but Season Four, seven in-universe years on from those events (and what seems a millennium in the real world) seems to have seen humanity merely shrug and get on with its business in a way that might not have seemed realistic until you look at what that real world has been through recently with a similar short-term memory and a ‘just-get-on-with-it’ attitude thereafter.

I’ve still got doubts over whether the Christina aspect of the story (with Rachel Evan Wood as maybe/not-Dolores) is actually happening in the ‘real’ world, with far too many things remaining abstract or convenient as the character attempts to make sense of what’s going on. Last week a scuffle between an attacker and her shadowy saviour – and we can presume the latter is likely to be a version of James Marsden’s Teddy – ended up with both men suddenly vanishing… and this week we hear that explicit details of a story-pitch she once wrote that turn out to echo her attacker’s own ‘arc’. It all seems like the kind of thing that could lead to ‘Christina’ being a hidden  ‘back-up’ only slowly reawakening and being prompted and being re-activated in some way. Maybe it’s all in a digital reality or is Christina in some aspect of a Westworld park, having loops and deactivations between events?

Aaron Paul as Caleb and Thandiwe Newton as Maeve make a great double-act, verbally-sparring off each other and more than capable of the physical demands of the job as the prime movers-and-shakers of the piece so far. You don’t desperately need to know their back-stories from previous seasons to accept them as action-archetypes going after the Big Bad, though one does wonder about some of those missing seven years and whether there’s truth to the fact they sometimes feel they work well enough alone. They do, however, seem to walk a little too confidently into what they and we know is obviously some sort of trap in a conveniently-deserted opera house, a little too determined that they’ll be able to get out of anything, especially as they’ve just narrowly escaped a deadly attack by two synths who had replaced a Senator Ken Whitney and his wife (played by Heroes‘ Jack Coleman and Deep Blue Sea’s Saffron Burrows).

Though the battle between synthetic life and humans is at the core of the piece (and has been since the Michael Crichton source material) it’s the new insectoid aspect of the story, seemingly nanobot-sized creations that enter the body (on this occasion, through the eye… ewwwww) and taking control of a person, which is actually the most interesting, a literal evolution in the way that the synths are waging war. Before it was just a case of seeing the host/synthetic creations be indistinguishable from humans but it now appears that Charlotte Hale and the synthetic version of William are upping their game and creating these hybrids.

So, to take a moment to look at the lay of the land: we’re now at the place where Maeve and Caleb believe they’re tracking down William (Ed Harris), though Tessa Thompson’s Charlotte Hale (actually a Charlotte/Dolores hybrid) actually has the prime version of William under lock and key and a synthetic version of William is acting as her ruthless emissary in the real world including taking out the Vice president of the United States on a golfing green; where Maeve and Caleb may now be the hunted rather than the hunters as they unwillingly enter a theme park based on what appears to be 1920s Chicago and where a woman called Christina but could be Dolores is asking questions about her existence and whether it’s real.

See?  I told you the series was getting simpler to follow! 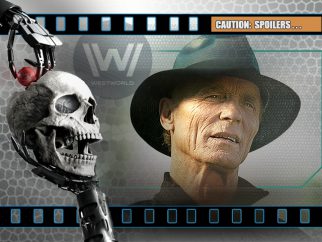