With the world at stake, Caleb and Maeve find out what lies beneath as Bernard explores ALL his options...

While Caleb and Maeve (Thandiwe Newton and Aaron Paul) attempt to navigate the 1920s scenario playing out in the latest Westworld park, they begin to notice some familiar sub-routines and characters – the costumes and faces are different but their arcs reflect previously-used loops. Maeve realises that to get to where they need to be they’ll have to not just go further in but further down.

And in a decrepit desert motel, Bernard (Jeffrey Wright) dreams not of electric sheep but of multiple lives and scenarios. On waking in the ‘real’ world, he and Stubbs (Luke Hemsworth) will have to make all the correct choices if he’s going to save the world…

There are so many characters to follow in Westworld that you sometimes have to be suddenly reminded of even important figures gone AWOL. The first two episodes of the latest run divided their time between people and places, but the third episode, Annes Folles (translation: Crazy Years, the coned term of the 1920s in France and deftly directed by the talented and now positively prolific Hanelle M. Culpepper) reminds us that we still hadn’t seen or heard anything from Bernard (Jeffrey Wright). A scan of the memory-banks recalls that we left him, immobile and inert, shutdown in a rundown desert motel room during the riots, his synth/host form literally gathering dust.

As he walks through some of the series’ main locations and iconography to date, the widescreen sequences are beautifully-framed and lit (seriously, would you expect anything else from this show?) and the presence of a horse somewhat feels like the unicorn in Blade Runner, a sparse room feels like 2001 with the frontier towns straight out of Hollywood’s classic westerns. Bernard’s internal processing and the idea that when he wakes he has to choose the exact right path – as almost all others lead to guaranteed annihilation for the human race – and he’s mentally experienced all of them first) has a very Doctor Strange / Endgame vibe, especially the idea that even the best, preferred and still unlikely outcome will demand huge personal sacrifice. Therefore Bernard (accompanied by minder Stubbs, played by Luke Hemsworth) knows exactly how he must respond down to the last detail – what food to order, whom to avoid interacting with and whose ‘bodies’ to keep in the trunk. Then we’re into Sarah Connor’s rebel years territory…No, the more you think about it, it doesn’t make a huge deal of sense, but it plays into the slightly askew otherness of Westworld as it finds strangeness in the everyday reality of its future days.

If Bernard is experiencing a Multiverse kind of approach, a large amount of the running-time elsewhere goes ‘meta’. Maeve and Caleb are in the 1920s Chicago version of the theme-park, one that might have all the flapper and gangster trappings but which seems to be running on the same story-scenarios that worked in the old West. Maeve recognises the script and punchlines and decides to use them to their advantage to see what literally ‘lies beneath’. Echoing the fact that under every Disneyworld there’s a multitude of tunnels linking the attractions that aren’t usually open to the public, Westworld has a similar set-up and Maeve and caleb manage to instigate a shoot-out between hosts in which the two can just pretend to be dead and get taken below. Here they wander about looking at the hosts being programmed but it still doesn’t feel quite right. Maeve realises that rather than just being ‘Chicago’, the script has been twisted into a recreation of the robot massacre that happened years ago… and so this ‘lower level’ is actually still part of the structured story being played out for visitors. She and Caleb will have to go deeper still to escape the onslaught (and for once, it’s Maeve who is in greater danger from the host-guns that only slay their own kind).

While Caleb is off facing down the enemy, his wife (Nozipho Mclean as Uwade) and child (Celeste Cark as Frankie) are being safely secluded away by one of his fellow operatives… but it all gets a bit more Terminator/T2 when said-protector is replaced off-screen and his doppelganger makes an effort to take them elsewhere for nefarious reasons (giving the ‘Come with me if you want to live…‘ aspect a different urgency). As always, it’s the kid in the room that seems more in tune with reality than the adults and thanks to a recent conversation going un-remembered and a blood-stain on a toy bunny, the fate they make is their own.  We also see a ‘Frankie’ in captivity… we already know she must be a duplicate (though quite how that’s achieved is something the story skates over) but Caleb doesn’t, which leads to the big climax, the opening of her robotic face (a key image from the trailer) and bug-spewing out as Caleb is trapped with her and likely infected.

Again, for all its complexity, this still feels like a season of Westworld in which the powers-that-be are doing their best to keep a balance of surprises and consistency, to make its futurist/cultural anthropology thesis bubbling under something that has to be purely entertaining and linear as well. You’ll still have to keep up, but it obligingly throws you some ibuprofen for the headaches along the way… 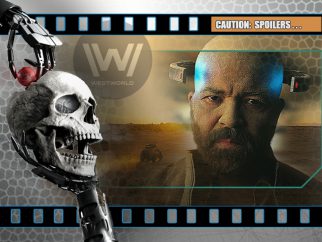