The Black Phone's strength is in human connections and subverting expectations...

Finney and Gwen Blake don’t have the best childhood. Growing up in Denver in the 1970s, their home-life consists of avoiding an embittered drunk of a father and a school-life that often leaves Finney with more bruises than friends. Gwen navigates it better, more willing to fight for herself and her brother and spending her nights wondering if it’s Jesus who sends her visions of things yet to happen or simply a curse that already claimed her mother.

But the wider neighbourhood has troubles of its own. Kids are indiscriminately going missing and the police fear a single serial killer is responsible. When Finney himself is snatched up off the street by ‘The Grabber’ he finds himself alone in a sound-proofed basement and tormented by his captor. But with Gwen determined to find him and a disconnected phone on the wall of the basement that keeps ringing, is Finney really alone?

There’s likely a rule inscribed in an infernal tome somewhere that anything with the name Joe Hill attached will be compared to the works of his father, Stephen King. While that seems a bit unfair, it’s true that they have a similar narrative territory – each taking aspects of the sinister and profane and filtering into mundane (or at very least very human) situations and examining how each element affects the other. That being said, the authors, each best-selling authors in their own right, cover such ground in subtly different ways: an emphasis here or tilt there, distinguishing them like two chefs preparing similar menus with distinct flourishes and signatures, each worthy of their own recognition.

Scott Derrickson, who also worked with Ethan Hawke on the equally memorable Sinister, was originally due to continue his Marvel association with mystical follow-up Doctor Strange in the Multiverse of Madness (before deciding to part ways with the production in favour of Sam Raimi taking the director’s chair) and one wonders what he would have made of that sequel – but if he had, we’re unlikely to have got The Black Phone in this form, which is a smaller but far more satisfying endeavour.

Going in, The Black Phone is one of those films where you might expect something quite simple and basic, the marketing doing itself little favour (or maybe delightfully wrong-footing you) by merely showing a sinister masked face, similar to the template of many a serial killer movie, with some posters having the achingly-familiar “the nightmare comes home” strap-line.  Yet there’s little else to go on before you take your seat / press ‘play’ and get something different. But even moments into the actual film, the story and the way it is being shot and paced starts to be obviously more nuanced – this will be a study of a time and place. Set in the 1970s, its genre is as much a period-piece as anything else – its subject is scary but timeless, the environment a carefully-rendered and dingy reflection of an age just gone by: where phones were still land-lines and however dangerous it might have been becoming, kids played out after dark. One can tell the story is written from someone who experienced the setting, if not all the same events, though it carefully stays away from the safer Stranger Things vein of fuzzy nostalgia.  The fashion and some the attitudes are of a different era, but as in all good stories, it’s as much about people (and, as it progresses, the basic endurance, ingenuity and survival instinct in its foundational aspects) as it is about the more supernatural elements that flutter around its edges and ultimately provide the supporting walls.

As in all good stories, it’s as much about people (and, as it progresses, the basic endurance, ingenuity and survival instinct in its foundational aspects) as it is about the more supernatural elements that flutter around its edges and ultimately provide the supporting walls…

The most haunting thing about the ghostly aspect of the story is that it’s not remotely frightening in the traditional sense. Tense, yes, definitely…. unnerving to a real extent, but it’s all more tragic and sorrowful than anything else. The core of Hill’s original story and Scott Derrickson’s screenplay (co-written by C. Robert Cargill) and direction give us a tale grounded in humanity perhaps exemplified most by the fact that the echoes of the previous victims have less and less specific memories of who they were as time progresses. The most recent victims, such as Bruce (Tristan Pravong) and Robin (Miguel Cazarez Mora) remember their living interaction with both The Grabber and Finney, but older victims such as Brady Hepner’s Vance are angrier and more lost and can’t even remember their names…when Finney recognises lingering aspects of their stories, they only recall fractures about their demise. However those moments of their trauma and imprisonment might be useful as Finney pieces their trials and tribulations together as a means of escape. Derrickson renders them as sometimes invisible, sometimes visible to the audience alone, but it creates and sets the mood perfectly. Albeit more overtly darker and of a slightly different genre, there’s also something of 2009’s The Lovely Bones (the Alice Seabold novel, directed by Peter Jackson for the screen in which a girl – played by Saoirse Ronan, in a breakthrough performance – watches her family and her murderer from the afterlife) in the telling of it.

Finney is a good kid, but an outlier, one forced to grow up quickly within a dysfunctional family and one on the end of both good and bad responses from other kids. The Black Phone is about how, his moment of greatest need, he not only finds strength inside himself after those mixed, bitter experiences but is able to offer something in return. Mason Thames, with only a handful of performances to his name so far, gives his own breakthrough performance, the pivot on which the whole film stands. His Finney is an average kid going through unfair hardships and delivers moments of despair, pity and a growing determination to survive, a list of nuanced acting challenges that might stretch considerably older actors. While Finney is the centre-piece, Madeleine McGraw as Finney’s sister Gwen, a girl with supernaturally-tinged gift/curse of foresight, is our viewpoint of the world beyond the cellar in which Finney is trapped. She is also trapped – between a father who believes a similar ‘gift’ destroyed his wife and threaten Gwen’s future and an inner knowledge that knows Finney’s survival may depend on he. McGraw walks an equally taught line in her delivery, providing some of the best lines and the few moments of levity. Barely fourteen, she’s been a prolific young actor for much of the last ten years and The Black Phone should be a calling card for both Thames and McGraw to be in the next wave of young stars.

The ‘supporting’ players deliver as well. Ethan Hawke, the name on which the film is sold, remains behind the mask for almost all of the running-time and though that might be a thankless job for some, it requires someone of his talents to make the unseen aspects of the character more than the traditional terror-trope. The Grabber is the required maguffin of the story and his ever-present mask, with its detachable lower-jaw able to emulate different moods, is something of a visual gimmick. However, Hawke, through his eyes and voice, gives us a character who is never less than a constant threat in a variety of different ways. There’s no doubt he’s insanely dangerous, sadistic, manipulative, but while Michael Myers, Jason Voorhees or Freddy Krueger were the supernatural antagonists of their features… here ‘The Grabber’ (and his un-named alter-ego) is their target and victim. Jeremy Davies (who has played hapless innocents in series like LOST but also delivered skin-scratchingly accurate depictions of more manipulative men such as Charles Manson) is also good as Finney and Gwen’s broken father, violent and mean but driven by despair and fear since the loss of his wife, a woman who had the same gift as Gwen is displaying and which drove her to an early grave. You start off wanting to hate him, but by the end it’s mere pity.

Despite the initial trappings, anyone expecting a more traditional, slashery outing won’t get that here. The Black Phone is a study in a different type of terror and dials up the realistic nature of cynicism and despair but leaves the cord of hope dangling, if sometimes just out of reach…and does so well in both regards that you won’t be sure, until the very end, which way it’s going to pivot. 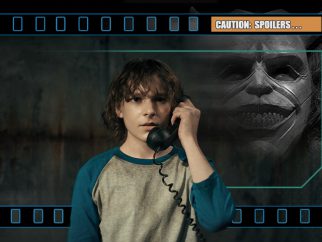 Algorithm and Blues: Evil’s app is certainly under the Influence…