Santanic versus… : NOS4A2 rematch is all about fear & family…

S2 Overview: The second season of NOS4A2 is fun to watch, but like its car, it is driven to distractions...

Seven years ago, Vic McQueen (Ashleigh Cummings) managed to survive the machinations of the mystically-immortal Charlie Manx (Zachary Quinto). Each were born with unusual gifts. For decades, Charlie has used his to entice children to Christmas Land,  a place with the veneer of the holiday season but which feeds on your worst impulses and keeps him young as long as his Wraith car remains intact. Vic has the newly discovered talent of being able to ride her own vehicle, a motorcycle across a bridge to anywhere she wants to go… but their needs and power collided with catastrophic results.

With Manx now in a coma, reduced to a withered frame and with little chance of survival, Vic has rebuilt her life with new partner Lou (Jonathan Langdon) and her son Wayne (Jason David), the result of her relationship with her previous boyfriend, Craig (Dalton Harrod) who died in the previous confrontation. Both Vic and Lou will do anything to protect Wayne, though the emotional and psychologial damage that Manx inflicted on Vic still lingers.

When Manx is miraculously revived, he seeks out his previous helper Bing Partridge (Ólafur Darri Ólafsson) and the two begin their journey to make Vic and her family pay for their ‘crimes’. But it’s a confrontation that could cost everyone dear and the fate of Christmasland and its lost children will be at stake…

While certainly enjoyable and infused with all the signature touches that Joe Hill and his father are famous for in their respective horror outings, there’s a feeling that this ten-part follow-up to the original 2019 mini-series feels just a tad stretched. What might well have worked better somewhere between five to eight episodes takes a few unnecessary and forestalling diversions along the way and by two-thirds or so of the way through even the winning mythology can’t make up for a its spinning of Wraith wheels as we take side-tours. The idea of Manx coming back to cause chaos in Vic McQueen’s life – thus putting her nearest and dearest at risk – should generate tension… and it does.  But just a few too many times it dangles a grisly fate for those supporting characters, especially in the ‘Next time on…‘ teasers, only for things to play out a little more safely or for sudden and unlikely recoveries. Characters are shot, have heart-attacks or stabbings but by the end, the actual permanent casualties are fairly few and far between… which ultimately dilutes the peril.

There are two remits at work in this second season. One is to flesh out Charlie Manx’s character and thus we have an origin story of sorts with his dead wife now haunting him from the edges of Christmas Land.  The attempts to humanise him have mixed results. We are shown that Charlie was a relatively good if lonely child, left to his own devices by his caring but neglectful whorehouse mother and unfortunately  leaving him open to the machinations of their employer… and then becoming a victim of that grooming, predatory child-molester. But that rather over-used trope doesn’t quite work in directly creating the woman-hating monster / pseudo-protector of kids we see in the contemporary story, especially as we later see him as a young man, hugely insecure and resentful but seemingly trying to be his best. There’s also a nod that the Wraith that Charlie Manx buys later in life may have a separate and deadly history, but that’s only momentarily referenced then dropped. It seems as if a lot is being thrown at the narrative wall to see what will stick.

Secondly, we see Vic McQueen trying to avoid the legacy of bad parenting she had, now that she is a mother herself. Ashleigh Cummings completely sells the idea of a young woman and trauma survivor uncomfortable in her own skin and not always sympathetic. The literal ghost of Charlie Manx never seems far away and, like her father, she’s turned to alcohol to numb the pain – simultaneously ready at a moment’s notice to fight for her son Wayne and partner Lou, but driving them away as she keeps them at an emotional distance less they become casualties of the horrors she’s faced. She’s torn between running and staying and it’s slowly fracturing the family. And, in many ways, this second season makes Vic the main player in a different way. Last time she was the underdog fighting an almighty Manx. She (and we) now know exactly how to stop Charlie, it’s just having the opportunities to do so, so he’s the obstacle to overcome, dangerous but now not insurmountable. Despite Quinto deliciously inhabiting the role  – whether under tons of old-age make-up or younger stylish clothing, he’s masterfully enjoyed the performances for two seasons – but there’s a real danger that Manx would  become a Freddy Krueger-type villain, each convenient survival diluting the character’s menace and protagonist’s victory. The Vic/Manx dynamic seems done now, doomed to rinse-and-repeat if continued. If this is last hurrah, he goes out as he should: with a whimper of defeat caused by roaring family love and not some eternally-empowered bound-to-return bogeyman.

Rather than a climax, the final episode feels very much like an epilogue to what has gone before in the previous episodes –  about a third of it resolving the main peril of the story and the rest following the survivors in its wake.  It’s not quite a happy ending for everyone, but one that’s bittersweet and filled with potential for them if they choose it.  It’s rare that a story-arc does more than tack on an ending, so it’s quite good to see some of the consequences, even with some elements left open.

The supporting cast also do well. Ólafur Darri Ólafsson has the difficult task of playing Bing Partridge, Manx’s lackey, as someone you despise and yet with whom you have sympathy – he’s not a nice man and his history is sordid and depraved, but he’s also someone who has been easily manipulated because of his mental failings… and the moment he finally stands up to Manx has you cheering him on, if just for a moment. Jonathan Langdon makes a sympathetic partner for Vic and his ‘Lou Carmody’ is perhaps the most level-headed character throughout – dealing with the exceptional by being exceptionally loyal but willing to call Vic to account when needed – and it’s needed quite a lot. Ebon-Moss Bachrach (‘Micro’ in The Punisher) and Virginia Kull (Sneaky Pete and Mr. Mercedes) as Chris and Linda, Vic’s well-meaning parents do well and Jason David as the young Wayne makes an impression.

There’s still scope in Hill’s world of dreamscapes and gifts for new stories, but it might be good to expand that universe rather than keep to the same players. I for one, would rather see any potential third series follow the scrabble-piece wielding Maggie Leigh than create yet another unlikely resurrection for Manx (though there’s glimpsed moments of further death in Wayne’s visions). Hill himself has spoken of ideas he has for her character, further inspired by what he saw in Jahkara Smith’s excellent performance. There’s also some potential in Millicent (played with melancholy by Mattea Conforti – who played the young Elsa in Frozen II), Manx’s daughter, now cast adrift in the world and a far more tragic figure than Charlie. But there too is the danger of giving us Manx-Lite unless it plays to her different personality and lingering possibilities of redemption he could never have.

Ultimately this is an unnecessary and somewhat uneven  ‘sequel’ to the first series’ adaptation of Joe Hill’s original novel, but it makes a decent outing and boasts good performances throughout, so has been well worth the drive. 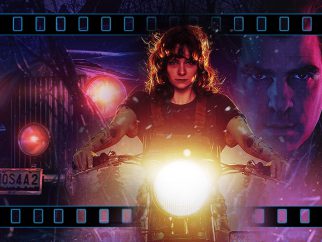 ‘The Batman’ trailer debuts (despite film still in production)…