Chapter and 'Verse: 'What if....' the best Spider-man(s) movie in years turned out to be animated?

Miles Morales (Shameik Moore) is a gifted kid, smart and instinctive and the winner of a scholarship that takes him out of his Brooklyn home to study at a local academy. But he feels somewhat adrift from the other richer and more confident students and his relationship with his parents is strained. His policeman father (Brian Tyree Henry) only wants the best for him, however Miles would rather spend time with his estranged uncle Aaron (Mahershala Ali) who has a more elastic view of the law.

But Miles is about to learn a lesson about great power and great responsibility. A bite from a strange spider might seem annoying more than fateful, but it’s the starting point for an awfully big adventure. A subsequent encounter with the vigilante hero known as Spider-man will utterly change his life. As one hero falls in battle, another rises. And as an experiment in the skyscrapers above goes horribly wrong, Miles will find a team of heroes from across the multiverse who share an arachnid-gifted origin and can teach him what he needs to know. 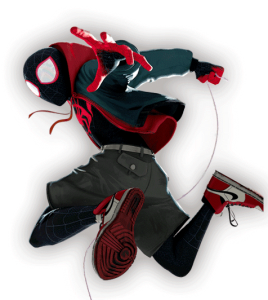 Firstly, though thankfully not essentially, a brief history lesson:

Between 2000 and 2015 Marvel Comics sought to revitalise their characters by creating a range of additional titles that reimagined their core creations but without the baggage of decades of mythology – giving them a twist and a tweak. This ‘Ultimate‘ line included variations on the Fantastic Four, The Avengers/Ultimates and Spider-man.  Of course, it wasn’t long before they started to develop their own ‘baggage’. In an interesting move that would eventually lead in to the end of the ‘Ultimate’ line of stories, that universe’s version of Peter Parker was killed but a young boy from Harlem, Miles Morales, found himself taking up his hero’s mantle. The new character became so popular that when Marvel folded their universes back together, Miles somehow survived and the current comics-line now essentially feature two ‘Spider-men’: Peter and Miles, with the former a guy in his late Twenties and the latter embodying some of the younger zest (and trials and tribulations) that Peter once did, while also coming from an ethnic background which gives him a different perspective.

In 2014 Marvel ran an epic limited comics series having different versions of Spider-man from different realities being hunted down by a new extra-dimensional threat. Not only would ‘our’ Spider-man and Miles fight alongside each other, but we’d be introduced to new variations: a version where Gwen Stacy (who died in mainstream Marvel continuity) was the one bitten by a radioactive spider becoming Spider-woman (a breakout character also affectionately known as  ‘Spider-Gwen’), a gothic, monochrome pulp-hero version from a world still in the 1930s (‘Spider-man Noir’), an anime-reality variation Peni Parker and her giant jaeger-like spider robot Sp//dr and even, as light-relief, an anthropomorphic Looney-Tunes-esque Peter Porker, the Spectacular Spider-Ham. It was a crazy mix of variations ranging from the sublime to the ridiculous and all on a familiar theme, but allowing creators full-rein to play the ultimate ‘What if…’ and team-up.

The same could be said for Into the Spider-verse this month’s major release from SONY and a feature which blends the two above concepts together and gives us a whole team of Spider-folk who are pulled in to the same world to fight a common cause. But if that background story sounds daunting, it’s good to know you could go into the multiplex with only the most superficial superhero knowledge and still enjoy the resulting romp. In fact, as family-fare goes, this could be one of the year’s slam dunks.

The story on show is undeniably fun, but the two things that make Into the Spider-Verse really work are its obvious heart and its visual style.

One could argue that any story that involves metatextual multiverse string-theory, predestination, several different variations on the same character interacting and a dose of resonant harmonics might prove too convoluted and high-brow for the average all-ages audience. However given the passion with which it’s told and the breakneck speed with which it’s delivered, its technical specs and plot are no more important or difficult to buy into than, say, Back to the Future or The Terminator – you just need to sit back and enjoy the results. Because such things are all in service to the greater message.

Miles’s story might ultimately involve radioactive arachnids and flying robots, but make no mistake – like all the best stories,  this is one that’s more about finding the inner hero. Plenty of stories sell that basic message, but Into the Spider-verse spends considerable time actually delivering on it and does so in a way that will enthrall existing comic fans  – it’s undeniably a love-letter to the character and the medium – but it will also likely draw in a more casual observer. For some young fans, this could be their first experience of Spider-man – and it’s a good one, with considerable bang for their buck.  Even as the story smartly thwips along, it knows that the characters have to resonate. Sure…there are pop-culture references and a library full of easter egg references for sharp-eyed fans, but unlike far too many productions that rely on such to hold them together, they are tasty decoration. Most of all this is about Miles – a great representation of both what it’s like to be young and unsure of yourself as well as being one of the most positive people of colour on screen this entire year. He’s the character that half the audience may not have heard of before this release but who will have won over everyone by the time the credits roll.

The visuals are also smart. While initial bursts of abstract, almost graffiti-like art, start appearing a few seconds in to the film and might come across as trying too hard to be hip, the film ultimately combines a variety of styles that end up complementing each other rather than clashing. The main animation is fun, just enough to be elasticated, exaggerated and slightly over-the-top without being stupid. One minute we’re cutting-edge CGI-enhanced graphics, the next water-colour neon hues and the next Bill Sienkiewicz-esque figures such as the bloated Kingpin dominate the frame. Along the way there are other lovely touches, such as Miles’s spidey-sense  and inner-monologues represented by colourful flashes and text boxes which honour the source-material without getting in the way. The ‘camera’ swings across beautifully painted backdrops, taking us place live-action couldn’t, but presenting an entire world (indeed, worlds) for us to invest in. You could argue it’s over-full, but there’s not a single frame wasted in the whole film.

The voice performances are spot on, working in tandem with the ‘looks’ of the characters.  Shameik Moore gives us an earnest Miles that anchors the entire movie and Jake Johnson provides a Peter Parker just past his prime –  but the supporting cast including Lily Tomlin (as Aunt May), Hailee Steinfeld (as a Taylor-Swiftish Gwen), comedian John Mulaney (as Peter Porker), Kimiko Glenn (as Peni Parker), Liev Schreiber (as Wilson Fisk) and Brian Tyree Henry as Miles’s father are all great. Nic Cage memorably provides the voice for Spider-man Noir and with classic lines, delivered entirely straight, such as “Sometimes I’ll let matches burn down to my fingertips, just so I can feel something…anything‘creates an instant classic.  Stan Lee makes an obligatory ‘appearance’ with a scene that couldn’t be a better posthumous tribute to his longevity and importance to the Marvel canon and there’s also a couple of major names (one in a post-credit scene) for roles that it would be spoilerish to reveal here.

Into the Spider-verse won’t please everyone, but it may win back some of those expressing superhero fatigue under the recent weight of product out there. It is reminiscent of films like Big Hero Six and The Incredibles – movies that, once they get into their groove, never look back. Importantly, it’s miles (no pun intended) ahead of the  Tobey Maguire / Andrew Garfield live-action Spider-man films of recent times in spirit and execution. Frankly, it’s hard to think of an all-ages superhero film that so rewards the audience’s investment. The truth is that on-screen and off, it’s a success story on a generational level. Kids will love it almost as much as nostalgic, knowing parents. It’s quite amazing that SONY and Marvel took the risk on such a risky project (yay! – ‘another Spidey origin story for the umpteenth time…‘ must have been the hardest sell in Hollywood)  but while it’s unlikely to generate Infinity War numbers, it’s already showing signs of a positive critical tsunami and enough box-office success to greenlight a sequel and be considered a genuine game-changer. (And for the record, stay through the credits for a tribute to Stan Lee and an indication of where that sequel may go…)

A classy cartoon and a marvelous multiverse romp, Into the Spiderverse could easily pave the way for a wave of animated stories successful enough to complement their live-action cousins and printed paper comics. 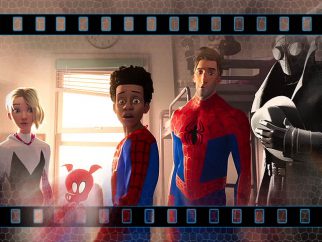 Back to raise some Hell – New ‘Hellboy’ trailer….