Spectacular, amazing, superior. 'No Way Home' is a chapter + multiverse love-letter to everything web-slinger...

After the post-credits surprise following his battle with ‘Mysterio’ in Far from Home, Peter Parker has defeated his latest enemy but had his secret identity posted across multimedia. Now he, Aunt May, Ned and MJ are at the mercy of public scrutiny, some kind, some not, but all of intrusive and excessive. There appear to be few benefits as they discover the cost of the exposure.

Peter visits Doctor Strange, seeking his advice and help and, reluctantly, the Sorcerer Supreme agrees to weave a spell that will make everyone forget Spider-man’s secret identity. But as Strange ignores warnings from his assistant Wong and Peter vacillates on the specific details of who might retain the knowledge, the spell goes awry, resonating across other dimensions and drawing in those who know Peter’s alter-ego, even from other realities. There’s Doctor Otto Octavious, Norman Osborne, Doctor Curt Connors, Flint Marko and Max Dillon (all of whom have encountered their own version of the wallcrawler) and more to follow.

But when Peter realises that even if the spell is corrected, many of these men will return to pre-ordained defeat at the hands of his counterparts, Aunt May encourages him to seek a way to cure them not kill them.

With great power comes great responsibility, but with the multiverse in play, it will also come with great cost…

Webs gone Wild! With what seemed to be an opening-weekend box-office only surpassed by stable-mate Avengers: Endgame, the latest Spider-man movie doesn’t just deliver pretty well on two hours of derring-do, but also manages to celebrate two decades of web-slinging in the process.

There’s almost too much to say about No Way Home – and much that goes beyond the obvious and less-obvious spoilers (some reviewers have managed to avoid those, but the details are embraced below to give context). Yes, for months there were growingly-less-convincing deceits, feints and outright lies to protect some of the film’s key elements but it’s a tribute to the commitment to the film that even those parts that were ‘known unknowns’ before release still work after the webbed-curtain gets pulled back. The quality is in the ‘how’ rather than the ‘what’. Firmly-placed in the MCU (you’ll likely catch ‘Rogers: The Musical‘ billboards and the Statue of Liberty, referenced in last week’s Hawkeye gets a pay-off), it’s a celebration of the character, packed – perhaps over-packed – to the seams.

Tom Holland, the latest Peter Parker, is given more to work with than ever. His character retains the youthful enthusiasm that has made this incarnation so popular, but the film puts him through the grinder, making him work for his successes and pay for his failures as they occur. Holland strikes just the right note… younger than some of the people who’ve played the character before, but as an actor with a growing number of diverse successes beyond the Spider-man films on which to draw. No Way Home works as the third part of a trilogy that’s growing with its audience (think Harry Potter), but one that likely still has more stories to tell despite the ‘book-end’ feeling of this release. Zendaya – another actor rapidly gaining traction in diverse roles – manages to be more than the damsel in distress, though that’s largely where the engaging character often ends up and Jacob Batalon as sidekick Ned gets some nice one-liners. But it’s in the larger canvas that the audience will find their comfort-zone and the growing connective tissue that the end of 2021 is bringing to the MCU. Vincent D’Onofrio’s Kingpin is appearing in Hawkeye and we have Charlie Cox appearing in No Way Home as Daredevil (both actors reprising their iconic roles even if there’s some selective wiggle room about whether previous appearances are canon).

And on that note… YES, of course… there’s multiple Spider-men here. Tobey Maguire and Andrew Garfield, surprising no-one or their clone, do indeed re-enter the mix – drawn in, as the ‘villains’ are, to this singular reality by Strange’s askew spell-weaving.  The pre-MCU Sam Raimi and Marc Webb eras are fully represented and accounted for. There’s a strong dose of drama that comes from their entry and meeting but also one of nostalgic and indulgent fun as they compare notes to their experiences good and bad… their tones deliberately vary: Maguire’s coming across as the more angsty and dark, Garfield’s as the more openly emotional. (That Holland and Garfield marvel over Maguire’s version having organic web-shooters is also something of a joy). These newcomers have never heard of the Avengers, but ‘our’ Peter Parker’s time on that team allows him the prep to work together with his other selves and they make quite the team.  Sometimes their banter and team-up is played in broad-strokes, but these are all the kind of scenes that fans have dreamed about and they work on a wish-fulfilment level.

It might have been tempting to give audiences a set-piece extravaganza without real consequence – something that is more than fine in the moment but largely does a factory reset. Though there’s a definitive change in the status-quo before the credits roll,  No Way Home has some serious emotional carnage. One of the genuine surprises is the notable demise in the midst of the drama. The death of Aunt May produces a reaction that travels around the multiplex with an audible gasp of disbelief. However it’s worth noting that this iteration of Spider-man has largely been unique in the way it has been devoid of the ‘Uncle Ben’ factor (the key death in the classic origin of Spider-man that set the young Peter, newly emboldened with his powers on a more altruistic course when he realises he could have prevented his uncle’s demise if he’d only put others first). The current films have never depicted the origin story and have only mentioned Ben in passing… and Marisa Tomei’s May is far younger than tradition would normally dictate with no actual specific acknowledgement of Ben’s role in her/their life. Tomei, often an under-rated actor, knocks it out of the park as the benevolent guardian who instills the value of the ‘second chance’ mercy factor in her nephew but who can come out swinging when needed. That it comes down to her, rather than Ben, offering the legendary if belated ‘With great power comes great responsibility…‘ maxim as she lies dying, gives Holland’s Spider-man that missing iconic piece of the puzzle, albeit in a tweaked situation. Though it’s also what points this modern Peter Parker on a dangerous mission to kill Norman Osbourn, it’s also the mantra that helps set him up for his higher moral values at the climax.

The film performs something of a bait-and-switch in its central dilemma. Classic Spider-man foes turn up to battle Holland’s version (all the returning actors in fine form and clearly enjoying themselves) but it’s this Peter Parker (convinced by Aunt May) that wonders if these troubled souls can be healed in a way that avoids their apparently pre-ordained deaths (as seen in the previous Spider-man movies). It’s a superb fantastical question in and of itself, made more complicated by the individual responses that said ‘bad’ guys have to that offer. However ultimately, the film largely has it both ways. Some ‘villains’ are satisfyingly ‘redeemed’ others merely defeated yet they are all still sent back – as originally demanded by Strange at the start – so the moral victories of good and bad guys alike is something of a pyrrhic success at best.

It’s all a roster-coaster ride. On both a character level and the kinetic set-pieces, this is a movie designed for the big-screen and to deliver an experience that ticks off every aspect. It’s not perfect – for my money Avengers: Endgame is still the Marvel epic with the highest benchmark and satisfaction in all departments. There are logic-holes are scattered through this piece and Cumberbatch’s Doctor Strange has to be conveniently sidelined for a solid chunk of the film once the chaos has begun (though a lot of that will be picked up in the next Doctor Strange film itself).  You’ll likely see a lot of the Spider-man franchise plot-points coming, many of them tributes and nods to the Spider-lore of both the comics and the films (even echoes of the controversial the continuity-changing ‘One More Day‘ story) but the movie executes them with aplomb, an unapologetic crowd-pleaser throughout and playing to both spectacle and established strengths. There’s similar ground covered to 2020’s Oscar-winning animation Into the Spider-verse (soon to get its own multi-Spider sequel) in the uniting of different iterations of the web-head and seeing how well they work when forced to work together. (Indeed, that multiverse factor is becoming almost a motif for the Spider-franchise as large as the arachnid logo on his chest), but you can enjoy both for what they are.

Tiny quibbles aside, this is a blockbuster ™ minutely blueprinted to entertain. There’ll be few fans leaving the multiverse experience in multiplexes without feeling they’ve got their money’s-worth and more. Not remotely aimed at the uninitiated or unfamiliar casual fan, this is a deep-dive, passionate, frenetic, indulgent and joyous love-letter to over two-decades of movie web-slinging (and decades more from the comic source-material) and No Way Home makes it a home run in most of the way it matters. With great enjoyment comes great box-office (a $253 million open weekend and over $75o million through Tuesday with $1bilion worldwide likely by Boxing Day, which would be impressive even before the age of COVID) and there’s still a ton more Spidey on the horizon… 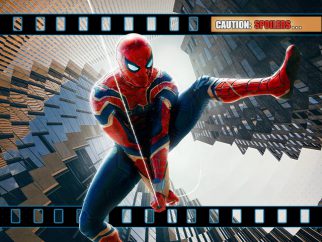 Discovery: A solid ‘Example’ of Trek playing to familiar strengths…