Discovery: A solid ‘Example’ of Trek playing to familiar strengths…

There's a classic feel to the dilemmas in the latest Discovery giving it its strongest episode of the current run so far...

The Federation is predicting that the course of mysterious anomaly will likely track it close to the Radvik-5 colony. Though it’s on the edge of the distortion and may or may not be impacted, no-one wants to take the chance.

While Discovery’s team continue to investigate the cause of the anomaly, including bringing aboard a brusque scientist with strong ideas of his own, the ship is immediately ordered to assist in a speedy evacuation. The process begins, but Burnham notes that there still seems to be a group of life-signs not moving to be evacuated. She is informed that these are ‘The Examples’, a group of prisoners confined in a maximum security facility and that the rulers of the colony are making no efforts to include them in the evacuation.

Burnham refuses to simply leave them to a possible demise, but to reach them she’ll have to navigate both an uncooperative defense system and the technicalities of a Prime Directive…

I’ve been fairly critical of Star Trek: Discovery so far, damning it with the faintest praise – and many of those gripes and moans still remain valid – but in saying that the latest episode ‘The Examples‘ feels like classic Star Trek (ie: The Original Series and The Next Generation) this isn’t, for once, a complaint about its lack of centre and identity. It’s simply that one can imagine some iteration of this entry in both previous eras and with the added VFX (at which Discovery has excelled this season), then it’s a solid episode that manages to hit some familiar but well-executed notes.

That being said, it is interesting that the all-encompassing Prime Directive that once governed the franchise is a less strict here. Though there’s no doubt that a majority of the prisoners in question are serving draconian sentences for the most minor crimes, the likes of Picard might have had to apply some diplomatic sneakiness to circumvent a key rule for an important resolution, but the fact that the stakes are so high and the world of the Radvik-5 colony is wiped out allows Burnham to play far more fast and loose with the technicalities. Burnham ponders for a moment and then essentially ploughs through it all to make the pragmatic and moral decision. It’s a case of telling the supercilious rulers that:  ‘you’re all refugees now, so your rule of law is redundant and we’ll act as we see fit – you’ll have to abide by ours…‘  which solves the immediate problem in a crowd-pleasing way, though perhaps offers some questionable repercussions if viewed from a different perspective.

This season has seen various scenarios in which characters are thrown together to work out problems that they’d generally prefer to work through alone. This time it’s not Stamets and Booker, but Stamets and an incoming scientist named Ruon Tarka (Shawn Doyle). Stamets is ready to bump heads with Tarka as the latter has based a lot of his own work on Stamets’ own findings and never appears to have acknowledged that. However though there’s some initial banter, snark and bristling, the two men actually find a lot of common ground in their analysis of the date behind the mysterious anomaly. It also leads to them both pushing safety protocols to (and perhaps beyond) their limits, much to the chagrin of Saru who has to curtail their activities. Given the strange markings on his neck, there’s clearly more going on with Tarka than meets the eye, but he does inject some energy into the scenes… particularly a ‘shouting challenge’ moment with Saru that arguably works better than pages of dialogue.

There are notable and welcome returns for David Cronenberg’s Kovich (helping Wilson Cruz’s Culber deal with his coping abilities and crisis of faith) and the under-used Tig Notaro as the ever-sardonic engineer Jett Reno. But it’s guest-star Michael Greyeyes as Felix, the defacto leader of ‘The Examples’ who is the most impressive performer in the episode, infusing his prisoner with a sense of nobility and stoicism. Unlike the other ‘inmates’ he knows that he actually belongs there with a crime serious enough to warrant his imprisonment and which has produced a lifetime of regret. The Native American performer gives Felix a real grace as he weighs up the decisions that he must make both for himself and for his fellow ‘Examples’ and by the time he makes his final choice, it feels like a journey made and a life lived – even though Booker would heartily disagree.

As a singular entry, The Examples plays to some of the long-established strengths of the Trek franchise and its combination of action and morality-plays and again it works well within that structure – combining the classic and the new. Whether that’s enough to show something more dynamic for the show’s ongoing but inconsistent presence and something more solid at its core, we’ll have to see. 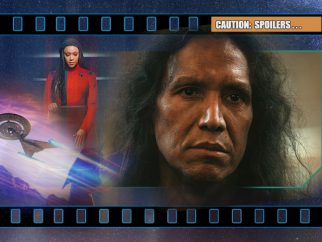 December: And Just Like that… it’s the War on Chris-Noth…