Witches and whimsy: 'The Chilling Adventures of Sabrina' gets a Netlfix Christmas special and a renewal, but could it do with a spell-check?

Sabrina Spellman (Kiernan Shipka) is days away from her 16th birthday. That would be stress enough for any young woman, but Sabrina isn’t just any young woman. She’s a half-witch and her bloodline is of particular interest to a lot of people who want to shape and guide her future. Her fellow witches are ready for her to accept the ‘Dark Lord’ and begin her journey down the road of magic and primal power, but Sabrina is less sure that writing her name in the ‘Book of the Beast’ sounds like a good idea – especially when it might interfere with the relationship she has with boyfriend Harvey (Ross Lynch) and their friends Susie (Lachlan Watson), Rosalind (Jaz Sinclair) .

But who can Sabrina count on? Her teacher Miss Wardwell (Michelle Gonez) suddenly seems like a different woman. Even her aunts Zelda (Miranda Otto) and Hilda (Lucy Davis) and cousin Ambrose (Chance Perdomo), who care for deeply, have agendas of their own and Faustus Blackwood (Richard Coyle) , dark ruler of all things magic in the area is certainly far from trustworthy. It seems that everywhere Sabrina turns in the town of Greendale, there’s someone or something that could put her secret and her life in danger…

As the stakes get higher and the threats more dangerous, can Sabrina even trust herself?

Ask anyone over the age of thirty and they are more likely to be aware of Sabrina the Teenage Witch from the light and frothy television comedy that starred Melissa Joan Hart (and ran from 1996 to 2003) than the original comics. However, anyone going in to Netflix‘s recent revamp The Chilling Adventures of Sabrina expecting a similar televisual vibe might have to reassess their expectations. Played far less for laughs and more for a sense of quirky unease and, as the show goes on, quite earthy scares, this is a series that is looking to ride the current successes of female empowerment and supernatural themes and does so with moderate success.

Tonally, the show took a while to find its footing and arguably continued to want its beating heart and eat it.  The comparison to another classic tv character  – a young girl tackling her supernatural heritage, her diverse gang of outlier friends and the hell that is High School sounds awfully familiar – were always going to be inevitable, but early Sabrina episodes seemed to be different enough: heavily stylised sets, over-the-top theatrical performances, bookended by comic-like graphic credit sequences and all delivered with a dark-tinged tongue-in-cheek. The Chilling Adventures of Sabrina seemed to be Buffy the Vampire Slayer but guest-written by J K Rowling and filmed by Tim Burton. But while the muttered ‘Hail, Satans‘ started in pantomine-fashion and evolved into sometimes savvy mirror-imaging of Christian and other religious traditions, they also began to have less of a snarky, whimsical nature as the darker tones of the story increased into outright horror.  Throat-slitting, orgies, child-abuse…. check, check and check. And a little like later seasons of Joss Whedon’s show, the young girl around whom much of the action and spells were spun, moved from quirky, conflicted heroine to petulant entitled princess – regularly risking the death and damnation of herself and others and seemingly failing to learn important life (and undead) lessons. She ignores all witchy warnings and moral boundaries by wiping her boyfriend’s memory when ever its convenient , she attempts to resurrect a dead body, she takes parts in seances without proper precautions… and by the end of the first run, Sabrina had sold her soul to the devil to undo her mistakes and thereafter some of her credibility as a heroine. Gliding towards camera alongside previous Academy nemeses, it’s all starting to feel more Heathers than heathens.

The cast are clearly enjoying themselves. Michelle Gomez now appears entirely comfortable in seductive boo-hiss territory, segueing like a snake from Doctor Who’s Missy to Sabrina‘s Miss Wardwell so effortlessly that a half-decent fan-fic writer could easily establish they were the same character.  Richard Coyle wanders in from similar territory and chews the scenery with pantomime aplomb as High Priest Faustus Blackwood. Lucy Davis (The Office, Wonder Woman) hustles and bustles through as Hilda, the more kindly of the sisters who raised Sabrina with Miranda Otto (Lord of the Rings, 24: Legacy) as the more opportunistic, social-climbing Zelda.  Davis is British and Otto is Australian and there are times when their differing accents are more distinct than any story logic should suggest. Chance Perdomo is also good as the pansexual confident and spiritual sounding board.

Of Sabrina’s High School friends, performer Lachlan Watson (who describes herself as non-binary) is one of the most interesting, essaying the role of a gender-ambiguous Susie Putnam with a quiet confidence even when the role demands a vulnerability. What could have been a token and formulaic factor, with sexual orientation often handled in well-intentioned but flawed and predictable beats in primetime shows, Watson makes the character interesting rather than just being defined by her lack of definition.

There was some lighter-hearted and ironic observations about certain dark-hearted aspects of the show in the national media. The Satanic Temple initiated a $50 million lawsuit against Netflix and Warner Bros. TV over a  statue of Baphomet used in the show and that they claim was “misappropriated” – though a confidential amicable settlement was eventually reached between all parties. Though that sounds like potential over-kill, there’s some truth to the fact that the series tended to pick and choose aspects of its mythology with all the undue haste and lack of due-diligence better suited to a  lightly-researched late term-paper or casual bullet-pointed cliff-notes. Terms like ‘Wicca‘, ‘Satanism‘ and ‘Spiritualist‘ are treated like random and interchangeable buzzwords, thrown in to an arbitrary mystical mix for effect and it’s easy to see how both a person with knowledge of religions and faiths or a simple layman viewer could get a little exasperated or even offended by the hand-wavery inaccurate references and lack of attention to detail for the sake of a quip. It’s short-hand and while some of it works for effect, other examples seem lazy and, frankly, far too flippant.

By the end of its first run (including an extra Christmas episode slotted in) the show is beginning to have its own identity, though during the second half of this first season (scheduled for a return in April) and into the already commissioned second complete run for 2020, Sabrina – both as a character and a show – may need to make some firmer decisions about the path she and it wishes to take: morality plays with pomp and froth… or more overt horror with a touch of pop-culture karma. However much of a guilty pleasure this could become, there’s also a real danger of style over substance. 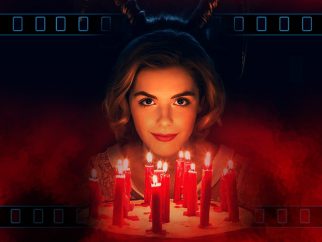