The latest Who episode is silly, disposable fun, but be careful what you dispose of in a web-spin city....

After traversing time and space, the Tardis team are finally back in Sheffield, though it seems they’ve hardly been gone at all.  However it also appears that something is very wrong in – and under – the city. What turns out to be far more than a missing-persons concern threatens to ruin the Doctor’s tea with Yaz and Graham’s return to make peace with the home he shared with Grace also leads to some worldwide webbing of the unsuitable variety.

All roads – and strands – appear to lead to a soon-to-be-opened hotel complex owned by scruple-free magnate Jack Robertson (guest-star Chris Noth) who has more than one secret he wants to keep hidden ahead of a potential political campaign in 2020.  But his problems are growing by the hour and if the Doctor can’t solve the infestation of the property, the wider city may be in deadly trouble…

“What’s wrong with this country? Why don’t you do what normal people do? Get a gun. Shoot things like a civilised person!”

Doctor Who has a long and problematic association with big spiders.  Though, by today’s  standards they might be found wanting, for a whole generation the likes of cosmic insectozoids the Wirrin were one of the most skin-crawling monsters of the classic run, their infestation of the ‘Ark in Space‘ causing this firm fan a few nightmares. It’s also hard to forget their impact on Jon Pertwee’s final outing ‘Planet of the Spiders‘ (especially with that classic image of one eight-legged monster firmly attached to the back of Sarah Jane Smith) which was so dramatic it caused a regeneration.  So choosing to pit the Gallifreyan against an arachnid threat is a double-edged sword…. twenty-first century sfx can certainly raise the threat-level like never before (no visible puppeteers this time!), but it’s a tradition that comes with strings and webs attached.

Following on the heels of last week’s historical Rosa and from its very choice of title, Arachnids in the UK seems bio-engineered to reassure a certain section of the audience that the show is not foregoing its science-fiction remit to romp. There’s almost literally a landfill of technobabble and some of the most dodgy, handwavery science seen outside a 1950s B-movie (toxic-waste and insects have a long tradition of bad endings) all used to frame the running-through-hallways that used to be a hallmark of the show. Essentially this is comedy-horror, providing the requisite number of giant spiders designed to have arachnophobes heading behind the sofa but never so much that eight-year-olds won’t be able to reassure their parents everything will be okay in the end.

Sex and the City and The Good Wife‘s Chris Noth has clearly being told to project a pantomime version of Donald Trump (if that was even possible) and essentially runs around being obnoxious and chewing the expensive scenery as Robertson, the hotel owner with aspirations of political power. That ‘the bad guy’ doesn’t actually die the horrible death we’re all waiting for (notably a recurring theme so far this season) makes one wonder if there are plans for his return somewhere down the line – though it’s not clear if the Doctor would even waste the six words to bring him down (‘Don’t you think he looks… fired?‘).  But that lack of closure does send off the episode into a rather anti-climactic ending, saved only by Yaz, Ryan and Graham all independently coming to the decision to continue travelling with the Doctor and her reaction to that.  It’s Graham’s decision that resonates the most and his visit to the home he shared with Grace  – and his imaging of her worldy wisdom still hanging in the air – plays to Chibnall’s strengths of making the ordinary a touchstone for everything else. It’s good to see Graham’s character developing well, with Bradley Walsh once again proving he can deliver some strong acting when given the opportunity and it’s something we could with more of rather than the breakneck speed and romping around that almost envelops it.

Whittaker’s Doctor is currently being written and played as a generic amalgamation of Tennant and Matt Smith, giddy but righteous and it works in some scenes better than others. The Doctor musing on whether she wants a sofa one minute while reeling at the revelation that the spiders are as panicked as anyone doesn’t always shift well. Whittaker’s a good actor but there’s no specific weight to the character as yet – the sense of wide-eyed wonder is palpable but ill-defined. It’s fine to be the optimist and positive (especially after years of worldweary wanderings) but I’m not sure that any of the Doctors we’ve known for so long would have let Robertson off so easily. Last week we saw The Doctor despondent and miffed by the treatment of Rosa Parks, but ironically, with the feel-good family aspect generally centre-stage, I’m starting to miss Capaldi’s more icy pro-active outlook. Frankly, I want to see that moment when Whittaker’s Doctor get angry rather than irked.

Feeling more and more like a British show made on a British budget but yearning for a US pacing and sensibility, this season of Doctor Who is definitely aiming in a different direction and ex-show-runner Steven Moffat’s recent comments about it needing to compete in a landscape full of Netflix budgets and the like is a pertinent one, rather than the snarky way some outlets perceived it. For an episode involving webs, there’s a ton of loose-ends that aren’t addressed and essentialy this is a B-Movie entry with a ‘C’ grade result… it’s passable and diverting because of its need to tailor to such a wide audience, but it’s silly and lightweight for the most part and hardly one to leave you in a spin… 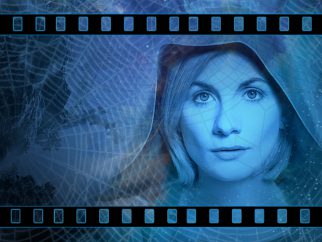