The latest supernatural spook is more infamous for its life off the screen than on it...

Wren (Joey King), Hallie (Julia Goldani Telles), Katie (Annalise Basso) and Chloe (Jaz Sinclair) decide to up the ante by exploring the internet phenomena known as ‘Slenderman’ but it’s a decision they quickly regret. When one of them goes missing, the others start to realise that whatever took her is now following them and pulling at their everyday perceptions. One by one they are drawn away, but can the otherworldly threat be stopped before it’s too late?

There’s a fascinating film to be made about the Slenderman internet phenomena and, ironically it’s already out there: the intriguing  2016 HBO documentary ‘Beware the Slenderman‘.  It documents the creation of the character by Eric Knudsen in 2009 through the ‘creepypasta’ format of short-stories that are cut, pasted, shared and added to across the internet and how it went on to be depicted across various outlets and mediums, often associated with supernatural abductions and stalking children. It got national prominence when linked to an attempted 2014 murder in Wisconsin when two adolescent girls repeatedly stabbed their friend, apparently citing their allegiance to the faceless, abnormally thin persona. (Knudsen expressed his regret that his creation was linked to the assault but declined to comment further). Since then, other instances were said to be linked to followers, including a raft of attacks and attempted suicides. The character’s mythology has expanded, drawing on elements such as Stephen King and Lovecraft and as more people discover it, the less or more defined it has become, depending on your viewpoint. Whether too much or too little has been made of the creation, your mileage may vary.

Sadly, the latest contribution to the legend, the singular-entitled Slenderman film – released on to DVD this week – is merely a shadow of all that – essentially an opportunistic, derivative stalk-and-talk horror outing that has nothing to offer or say except to demonstrate how easy it is to attach a cinematic cart to the concept and then unleash a range of further unpleasantries in its name. Mining a mixture of familiar A Nightmare on Elm Street and The Ring imagery with some technical cinematic ability but little originality, it amps up the mood and horror imagery but doesn’t insert much story beyond the scenes you’ll see in the trailer.  Not helped by forgettable characters and narrative cuts Sony apparently made to stave off complaints from interested parties, the resulting story, directed by Sylvain White, is a template tale of a group of young female friends who are tempted to conjure up the featureless frightener (via the internet as Ouija boards are SO last decade!) and then realise they can’t put the genie back in the bottle. Been there, exorcised that. Cue lots of running around misty woods and dreamy nightmares but – like the inspiration and source material – it’s a triumph of image over actual non-consistent content and mood over logic.  The likes of Jason, Michael and Freddy all had remits and agendas but the Slenderman of the title is as bland as the name suggests and there’s really no rhyme or reason to the paper-thin mythology presented. It’s the equivalent of looking at a painting of the Scream while humming a Taylor Swift song. The result is not so much ‘bad’ as just massively disappointing and lazy.

Sadly, despite some creative decisions in the visuals and audio departments and the huge potential to be explored if only some originality has been exercised, everything else falls short and this arthouse creepypasta knock-off is ultimately more Ragu than Ringu. 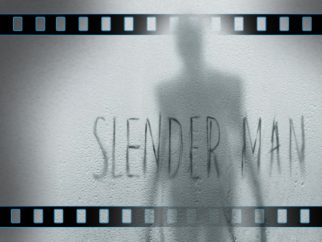