The new season of Doctor Who establishes its own type of Parks life as it encounters the kind of monsters that are- sadly - far from alien...

The Doctor lands the Tardis in a back-alley and is only half-surprised to find out it’s not Sheffield circa 2018, but Montgomery, Alabama in the 1950s.  Before they can depart, the Doctor detects something amiss: signs of misplaced energies that indicate time-travel that precedes their arrival.  Deciding to investigate, the travellers find that all roads apparently lead to an unassuming but upstanding woman named Rosa Parks.

The Doctor, Yaz, Ryan and Graham know that the following day Rosa is due to stand – or rather sit – her ground, refusing to give up her seat on a segregated bus, an action that will kickstart the civil-rights movement.  The problem is that someone else knows that too, seeing it as the focal point for when a shift in history was quietly enabled.

And soon, the Tardis crew, the other time-traveller and Rosa Parks herself find themselves with a ticket to ride on a date with destiny where nothing must go wrong…

The first two adventures for the newly-minted Doctor have been somewhat get-to-know you outings for characters and audience. As much a first-date as a re-introduction, the episodes rather tentatively put on new clothes, put their best foot forward and never went too close to well-established borders. The result was predictable – a massive influx for the premiere and a good, if slightly more reserved response to the second episode with the public and critics giving a tentative thumbs-up along with a few caveats and niggles.

Short of the pre-broadcast anticipation, it is with ‘Rosa’ – the third episode of the new run – that Doctor Who faced its first real test. Somewhat traditionally, the third story of a new incarnation often heads into historical realms and this is no different, but in picking 1950s America, the landscape is more recent and particularly problematic. A story that is far more about racism than it is about racing around (and one grounded in real events and real historical people who changed the course of history) it’s one of those occasions where writers and story-tellers have two mandates and both can be problematic. They must entertain and excite, never forgetting they have to fill  forty-five minutes with some form of fun for those expecting a story about time-travel shennanigans –  but also to be responsible – to tread lightly and with particular care around events and a subject with huge emotional relevance and resonance. Where in other occasions the stakes could be getting the Daleks right or keeping series continuity intact, the risks here are more extreme even if filled with good intentions:  either be boring or over- preachy and have the audiences tune out or, worse, trivialise or take ownership of an act of bravery that rightly belongs elsewhere and when.  With very few reviewers getting a preview of the episode, the broadcast scrutiny was even higher.

The result… is a fifty-minute episode that thankfully gets it right for the majority of that time. Yes, there’s an obligatory science-fiction attempt to alter history – noting the butterfly effect of quietly changing small details rather than loudly killing important people. But the main focus of the piece is on Rosa who in her own way proves that exact salient point – that by a quiet but determined act of defiance she changed the world.  At times feeling like a slightly more subdued episode of Timeless, our Tardis crew dart around acting as guardians for Rosa’s routines and encountering the prejudices of the time,  nudging things back on track when the rather undeveloped two-bit future hoodlum Krasko (Josh Bowman) attempts to divert.  He’s little more than a maguffin to have a reason to encounter the dangers of that time period, but if he’s less memorable than the titular character, so be it. To this Briton’s ears Vinette Robinson’s accent is decent enough to give voice to the civil rights icon and she gives Parks an innate nobility and sense of justice without ever over-playing her own sense of importance.

But it is notable and important that any direct influence on Rosa’s actions from our heroes is subtle and if there’s any at all, it comes from Ryan – understandably star-struck at meeting the likes of Rosa and Dr Martin Luther King Jnr – both heroes of his Gran –  and thus avoiding the whole concept that a white character could have been responsible for any of Rosa’s bravery. That could have off-set any good intentions in the premise and Chibnall steers the bus and story through that thematic minefield.  Equally, on a visual level South Africa works surprisingly convincingly for 1950s Montgomery and there’s enough overt and casual racism portrayed on the screen to make audiences uncomfortable without losing them to the bad taste it leaves.

‘Rosa‘ sets Doctor Who back on course… not perfect (again the story itself is pretty basic) but ultimately a well-directed statement of intent that the series can still edge into territory that’s more than just a galactic romp and speak to issues that still find resonance and relevance today. 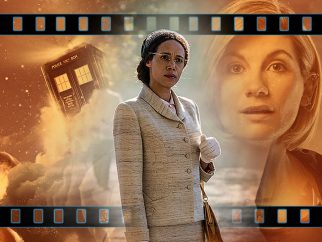