With the adaptation of the 'Bosch' books proving a success for Amazon, Michael Connelly's latest original novel feels almost like a season of the show itself...

A year ago, Harry Bosch made a promise to himself and a forlorn mother that he would solve the cold-case murder of her daughter, Daisy. The mother, Elizabeth Clayton, attempting to resist the pain-numbing lure of the streets on which Harry had found her and which claimed Daisy, is now sleeping in his spare room and the case remains unsolved. Off the books, Harry’s making progress but it is slow and frustrating.

Detective Renee Ballard continues to work the ‘Late Show’ of the night-shift – respected by her immediate colleagues, but still sidelined by the Powers That Be, quietly punishing her for her complaint of sexual assault by a senior officer.

Both are loners in their own way, both dedicated to the job despite their differing methods. They also both have official cases that demand their daily attention and test their resolve, but when Ballard finds Harry pilfering through old files against department policy, she wants in on his search for Daisy’s killer…  Can the notoriously demanding Bosch and the driven Ballard find enough common ground to not only solve their case but survive it?

The Bosch series, from Amazon and featuring the talented Titus Welliver as the titular detective, has been doing well, lifting and tweaking some of the novels’ story-threads into a tighter, more compact narrative.  Connelly’s novels has lightly referenced some of the multimedia efforts and let them push gently at the boundaries of the written universe’s version of his characters. However, it’s been kept to minimum mentions and slight course corrections.

It’s interesting then that Dark Sacred Night is the first book from Michael Connelly where one might feel the vibe working the other way – tv influencing the book format. You could be forgiven for noting that with two strong investigations but a number of sojourns and side-steps into other cases and situations, that Dark Sacred Night feels almost like the contents of an entire tv season distilled to one tome. Perhaps that’s deliberate or merely a case of Connelly having been an active part of the series production and it influencing the construction of the narrative as it ebbs and flows. Connelly has always liked addressing the realities of the procedural elements of his thrillers, often showing it’s due diligence and research that can turn a case as much as bullets or brawn, and it’s a skill to weave them into each other so that each element brings something without looking contrived. There’s a lot going on in this book but a majority of it is important to the eventual resolution in some direct or indirect way.

Connelly has created an interlocking series of characters who clearly occupy the same world and occasionally come in to each other’s orbits. Harry Bosch and Mickey Haller have appeared together and separately and last year he introduced Renee Ballard as a totally new detective within that frame. Dark Sacred Night is a good opportunity to compare and contrast his creations and it’s proof-positive that Ballard isn’t just a gender-swapped protagonist. Though they clearly recognise a similar kind of drive for both legal and moral justice, their age difference and methods differ and it’s a partnership that’s initially more about simple convenience than anything else. It’s good that there’s no hint of romance between them, though one can see how further collaborations between the characters (and even the inclusion of Haller) could provide interesting drama and conflict.

Bosch has been allowed to realistically grow older as the novels have progressed. While still a more-than-capable guy, he’s not super-human: he’s getting the aches and pains and complications that come with his age and career. There is definitely the feeling that while other authors might have had Harry still leaping up after a fight and putting aside any bumps and bruises, Connelly makes sure that we feel each scar and strain. While it’s always been reasonable to assume Harry will always make it out of the story alive – he is, after all, Connelly’s signature hero –  there’s growing indications that he can’t always survive these stories without significant cost – both physical and emotional. There are some distinctly questionable choices being made by Harry in this part of his life which the author acknowledges. By the time that Dark Sacred Night is done, it does feel like something of a genuine transition to an era where Bosch himself is counting the days and making each of them count.  It’s hard to think of Connelly ever writing a ‘final’ Bosch story and hopefully if and when that does happen it won’t be for some time yet, but it’s interesting to see a character acknowledging his triumphs and mistakes, finding new ways to fulfil his mission and equally evaluating if he’s past his ‘prime’… and yet, written by an author who’s clearly still in theirs.

Connelly and his creations frequently inhabit not just the bestseller lists but the fringes of a world we can recognise and – through these books – view from a safe distance and Dark Sacred Night is yet another reason to celebrate that we have such interesting characters on that wall.

Dark Sacred Night is published in the UK by Orion on 30th October. 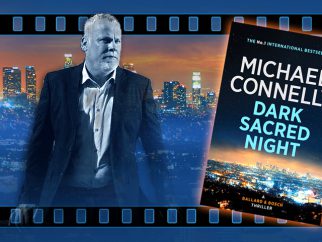