In Alex Garland's latest, eco-systems are doing it for themselves...

It’s been months since Lena (Natalie Portman) lost her husband Kane (Oscar Isaac) when he was apparently killed during a secret military mission. An ex-army soldier herself she always knew there were dangers and secrets in serving one’s country but the loss is still profound, increased by the lack of specific answers about his demise. She’s returned to academia and her specialty of cutting-edge biology, but has withdrawn from the passionate life she once had.

So when Kane quite literally walks back into her home, she’s shocked. He can barely speak and doesn’t remember where he’s been. When, minutes later, the house is stormed by the government operatives and she is sedated and whisked away herself, it appears she may finally get some answers. But she couldn’t have guessed it would involve a quarantined zone established after something crashed to Earth years ago… an area which has an expanding perimeter, its shimmering, organic edge partly obscuring what now lies within. Various teams have gone in, apparently never to return – one such team involving Lena’s husband.

Lena, citing her expertise, demands to be part of the next team going into the ‘Shimmer’ but what awaits them.?

Not every science-fiction film has to fit a tidy, all-threads-tied-together template or hit neat-and-tidy formatting. However there is value in being able to pay-off your big ideas – perhaps not answering everything, mysteries and subjective answers can be good – but not merely throwing everything against the screen and asking the audience to decide for themselves what sticks.

Alex Garland made his breakthrough writing 28 Days Later and was then Oscar-nominated Ex Machina , which was a streamlined slice of science-fiction, taut and interesting – managing to be somewhat subvert the usual tropes and get to the electronic heart of artificial intelligence. His follow-up, Annihilation, is really the exact opposite. Swapping metal for earth, sexy-robot action for earth-mother conversations and giving a sprawling, vague story in place of the clinical precision of its predecessor, the film feels expensive and expansive but fails to fill its narrative corners.

Though there are moments when the film is effectively creepy, both in the tension and some of its interim pay-offs, Annihilation (adapted from the first book of a trilogy by Jeff VanderMeer) comes across as more a series of questions than answers, an example of tone being more important than plot. There’s no doubt it’s interesting to look at and experience but all too often it feels like a VFX expert being given full rein to play with a toolbox of ideas rather than have a story that holds together particularly well.  Essentially Annihilation feels like the flower-child offspring of Interstellar and The Fountain, by way of The Happening, containing an interesting idea but the result: enough on-screen elements at which to both marvel at the pretty pictures counterbalanced by a loose pseudo-intellectual script at which one feels the urgent need to simply roll the eyes and stroke the chin, pretending that there’s something more profound in the mix.

What is welcome is that this is essentially a female-led cast, all the main characters being capable women each with their own qualities and foibles. The story makes note of their gender but doesn’t make it a preachy selling-point. The casting itself is interesting. Portman, when she gets a good script, is a fine actor but here she struggles with material that essentially requires her to look confused and sad in equal measure.  The film has avoided casting a kick-ass Ripley-type in the key role and Portman is convincing as a driven professional rather than action heroine. The story may call for her to be a military-trained biologist, but that combination seems solely there to allow her to have a few key scenes shooting big hardware that punctuate the ecological themes. The likes of Tessa Thompson (Thor: Ragnarok), Gina Rodriguez (Jane the Virgin), veteran Jennifer Jason Leigh and Swedish actor Tuva Novotny are all empowered individuals within the ‘mission’ and as capable as any male-led mission would have been but equally they are familiar archetypes and you’d be pushed to remember their character’s names after the closing credits, even if the landscape around them draws the eye.

Yet another example of a potentially great Outer Limits / Twilight Zone entry being spun out beyond its natural length or breadth, Annihilation is rich in provocative potential – the central trunk of the evolutionary theme is fascinating and ambitious – and it has has the budget and star-power to reach for the sky – but unfortunately it can’t quite find its footing and thus finds itself adrift in a surreal landscape that shimmers rather than stuns. 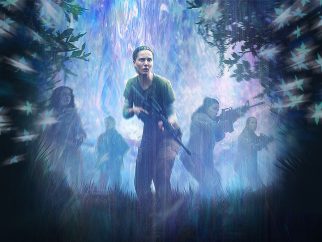