'I Kill Giants' has enough quirk to work, but its study of grief stands on the shoulders of perhaps better movies...

Barbara Thorson (Madison Wolfe) is not really a fan of people. She seems to be at constant odds with her siblings, has few friends and would much prefer to play Dungeons & Dragons rather than PE. But if there’s one thing she dislikes more than people… it’s giants. She knows all the different types of ancient titans, their strengths and weaknesses and has assumed the mantle of protecting her Long Island community from their nefarious assaults. By her reckoning, she’s averted major attacks on an almost monthly basis.

When a young girl, Sophia (Sydney Wade) arrives from England, Barbara may have, reluctantly, found a friend but Sophia isn’t quite sure what to make of Barbara’s battle-plans and attitude to everyday life.  At the same time, a new guidance counselor, Mrs. Mollé is assigned to help Barbara and struggles to make a connection with the acerbic youngster.

As Barbara looks out to sea, awaiting the rival of her next adversary, it seems powerful forces are gathering, but will Barbara be able to accept help from everyone who offers it and which reality will she choose?

After an enigmatic trailer and good early advance reviews I really wanted to love I Kill Giants and while there’s a raft of offbeat and off-kilter elements to applaud within it, the truth is that I don’t love it as much as I’d like to.

With a smidgen of Beautiful Creatures and certainly more than a handful of A Monster Calls, I Kill Giants (adapted from his own graphic novel by writer Joe Kelly) has its grieving heart in the right place and all the tools to accomplish its story but feels like its makers are working from two different template ideas that never quite complement each other as well as intended. In its efforts to blend pixel-friendly whimsy and deep somber metaphor, the film casts its runes a little too widely. Tonally, it never quite makes the distinction it needs between the two and while its fine to leave some ambiguity in its tales of beastie-battling, it feels like its swerves to accommodate reality and fantasy are more earnest in the moment than they are effective in the longer run.  Its ‘…from the producers of Harry Potter‘ poster credit and bigger set-pieces suggest it wants to sell itself as a mainstream monster movie with a message but the outlier-snark of its execution and darker subject-matter screams a quirky independent feature… and so the result is uneven. The archetypes and characters,  are laid out in a familiar template and it doesn’t so much ask you to ‘believe’ the fantastical elements it creates so much as ‘accept’ their bigger purpose ™. You’re aware of the film’s on-the-nose remit and message long before it plays out on screen and so the question of its success becomes more about the performances than any sense of originality.

Those performances are the film’s strength.  Madison Wolfe as Barbara largely strikes a compelling, distinctive note, sometimes threatening to over extend the snark but always pulling it back just in time. In lesser hands it could have been distinctly  showboaty, but Wolfe mostly avoids some of the tells and affectations that must have been a temptation and the result is a more recognisable character.  Leeds-born actress Sydney Wade (daughter of Tonicha Lawrence of Emmerdale / Casualty fame and who gives her British hometown a shout-out during her introduction) is quietly impressive as new arrival Sophia and Zoe Saldana has the opportunity to play a more nuanced role than in the all-action Guardians of the Galaxy franchise. Imgogen Poots also creates some depth to the role of Barbara’s older sister, forced to step into the mothering role of the family.

Its running time is only 106 minutes but its sometimes agonisingly slow pacing makes it feel almost twice the length and yet it could have lost almost a third of that and still told the same story with a better emotional punch – especially the last ten minutes which give several non-needed epilogues that essentially capitalise, underscore and bold that message more than needed.

Visually, the monsters that Barbara battles are best when glimpsed in the shadows, their frames indistinct and their power to be anticipated rather than witnessed. Seen in greater detail in a couple of scenes, they are no more or less impressive than the recent one-size-fits-all SFX-led outings from the likes of Transformers to Justice League and it’s a shame they don’t have anything more to distinguish them. One can only imagine what a Gilliam or Burton might have delivered in that particular regard.

Like Juno or Napoleon Dynamite, I Kill Giants seems capable of being the kind of divisive movie that means everything to some of its viewers who embrace its quirks, its message catching them at just the right moment, but much less so to others who think its trying too hard to seem like its not trying at all.  One of those outings where the trailer and the poster are arguably more enticing than the fully-fledged end result, I Kill Giants is still a perfectly decent, well-intentioned study of grief, coping and hoping, helped by a clearly talented ensemble cast. There’s much to recommend it while still being frustrated by its flaws. But it’s feet-in-both-camps may prove too wide a gait to establish both the huge commercial success or indy praise it seems to want – not quite reaching the audience it might have done with some better creative choices… and that’s a pity, because inside the tale of heartache is a taller story aching to reach further. 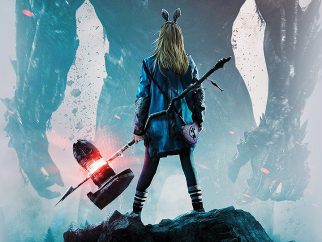