After all the hyped-up hyperspacing, Star Wars' standalone 'Solo' may not be quite a singular senasation but it is fun enough and 'shiny'...

Han is a young man with a plan – several in fact – and all of them involve he and his companion Qi’ra getting off the backward planet of Correlia. But plans don’t always work out and though the skilled but errant flyboy manages to get off-world he’s forced to leave Qi’ra behind – swearing that he will get money, a starship and come back and rescue her.

Initially he joins up with the Empire but realises it’s a poor choice. However his decision to force his way into a group of mercenaries led by a man named Beckett is also fraught with danger and their raid on a train full of precious power-rods doesn’t quite work out as expected either. This is not good news to anyone, especially Dryden Vos, head of a criminal syndicate that doesn’t tolerate mistakes and losses.  However it turns out that one of Vos’ lieutenants is a familiar face and soon the ramshackle crew are off on a mission that will either see them rich or dead.

But in a galaxy where there’s little honour amongst thieves, just who can Han trust?  Maybe the walking carpet and fellow fugitive known as Chewbacca can give him some pointers?

Famously, Joss Whedon and Tim Minear  pitched the late, lamented Firefly series as a story that tilted towards the Han Solo elements of the Star Wars saga – wondering what stories could be told with a mythology that thematically held focus on a hive of scum and villainy rather than soaring off into galactic battles of epic proportions. They kept the fast-talking n’er-do-well archetype with Nathan Fillion as Mal Reynolds, dispensed with the ‘alien’ aspect and got down to the nitty-gritty of the people who simply wanted to survive as  outliers of a more draconian, militarised regime. The adventures of Mal, Wash, Zoe, Kaylee, Book, River, Simon, Inara, Jayne etc have had a second life  beyond the series and subsequent Serenity movie that thrives to this day.

As much as Firefly significantly owes a debt to the early days of the George Lucas opus, the latest entry into that Lucasfilm pantheon of stories, Solo,  owes something to the values of  Whedon and Minear as well – even down to the film’s echo of the ‘train job’ pulled in that series’ secondary pilot. The release of such an official Star Wars movie that recognises such innate appeal seems both bittersweet and inevitable, rich in possibility and budget and yet – arguably – a few decades late to the party.

And to call the film ‘Solo‘ is a little ironic, a little like singling out one element (calling Serenity  ‘Wash’ or ‘Mal’) because – despite its title – this is very much an ensemble film, scattered full of rascals and reprobates. The story may necessarily pivot around the misadventures of the young cosmic flyboy who would grow up to be a reluctant cornerstone of the Rebellion , but it’s in the way he bounces off his potential friends and foes that drives the plot and without the rest of the cast, the film might not be half as much fun.

Alden Ehrenreich is good in the titular role, not falling for the trap of emulating Harrison Ford but clearly cut from the same cloth. Han is cocky, willing to improvise and good at bluffing rather than being any great mastermind, but it’s those qualities that see him through his life when far smarter people fall. There’s an undeniable pleasure in seeing the ‘first’ meeting between Han and the likes of Chewbacca (now played by Joonas Suotamo), smooth operator Lando Calrissian (now Donald Glover) and a more shiny Millennium Falcon, especially as it makes the first jump to hyperspace – there’s no mistaking the classic moments of the past and celebrating them. There are moments that feel a little less organic, deliberate call-backs of which some work better than others, but most hit close to the mark.  ‘Newcomer’ characters/actors such as  Emilia Clarke (as Qi’ra), Paul Bettany (as gangster overlord Dryden Vos), Thandie Newton (as Val), Woody Harellson (as Beckett) and Phoebe Waller-Bridge (as the wonderfully acerbic droid L3-37) are serviced to varying degrees.  Clarke has learned much from her pivotal Game of Thrones role and slinks her way through proceedings though it feels like a character designed by committee; Bettany scores another notable hit in a blockbuster year, this time as a sneering villain;  Newton is fine with what we get but has a vastly underwritten role that offers her little of her Westworld nuance; Harellson is rough and ready as always and Waller-Bridge shows why she’s so busy writing and acting).

The finished film is likely an amalgamation of several approaches, sewn together reasonably well, if somewhat safely and predictably after the problematic tensions involved in its filming. One will always wonder what the original version of the film would have looked like, just how much of Phil Lord and Chris Miller’s fingerprints remain after they were fed to a garbage compactor and veteran  Ron Howard was brought in to retrofit a huge chunk of the feature by the studio. It’s unlikely we’ll ever know, so you can only judge on the result we did get. On first viewing, it’s simply an enjoyable romp, zippy dialogue, plenty of action and a movie that clothes itself in elements of bespoke cultural nostalgia (though, a few too many capes?) and will yet probably provide fodder for both sides of the argument regarding the quality and very nature of exploring of exploring an extended Star Wars universe…

The film hasn’t come out of the box-office stalls with the speed and dexterity of the Falcon‘s pilot – and commentators will likely point to everything from Star Wars fatigue, the production hiccups and the state of cinema at the moment. However if it’s a romp you want, Solo delivers the basics with a certain panache… 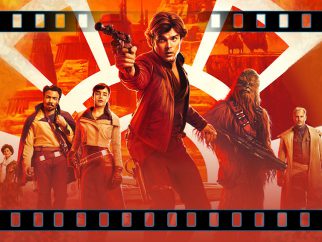