A slice and dice of intrigue and murder proves there's some life left in the dark streets of Victoriana...

London in the late 1800s, a few years before Jack the Ripper will cut his way through the back-streets. But another monster is already there, apparently randomly murdering men, women and children and nicknmaed the ‘Limehouse Golem’ by the local rags. It’s a moniker the killer seems to have encouraged, noting in latin scrawls upon the wall that those who prevent carnage are as guilty as those who perpetrate it.

Scotland Yard detective John Kildaire (Bill Nighy) is assigned the case, knowing full well he’s got the job because others have already failed – and that he’s unpopular within the force. A professional failure will simply add weight to the whispers about his private life and his colleagues can blame him for a lack of results when he inevitably fails to stop the deaths.

A possible clue leads Kildaire not only to a small group gathered on the same day at the British Library but also to another cause celebre: the trial of a young woman named Lizzie Kree, accused of poisoning her husband, the writer John Kree. Kildaire knows that John Kree is one of the people on that list of ‘Golem’ suspects. If John was the killer, then his reign of terror is over, but in order to prove that he’ll have to convince Lizzie to confess to his demise… but she has her own story to tell first.

Those who like the myriad ‘Ripper’ thrillers of old will find much to like in this grand-guignol thriller that slices and dices its way through Victoriana and old London town. Superior performances by mainstays such as Bill Nighy and up-and-coming talent Olivia Cooke and Douglas Booth elevate what could have been a more conventional romp, with writing dues paid by versatile screenwriter Jane Goldman. The potent combination occasionally teeters on the precipice of taking itself too seriously and causing a case of the vapours, but there’s much to applaud in its presentation.

Canvas-wise, the film feels somewhat caught between cinematic quality and tv movie. Clearly a fair amount of money has been spent on set-decoration and the obligatory Victorian sights and sounds populate the foreground and background –  but there’s something of a niggling feeling from the cinematography and lighting that the rich music-hall colours and flickering shadowy slums exist only for where the camera is pointing and there’s less of a sense of a bigger world beyond its frame. There’s talk of growing public consternation and backlash against the police, but it’s mostly confined to a few crowd scenes within the theatre and street outside. Despite that, director Juan Carlos Median does well when sticking within the smell of greaspaint and footlights.

The Limehouse Golem is a solid period-thriller romp. There are some contrivances and occasional leaps of convenience – the choice to show each of the four main suspects committing the crime as Kildaire imagines their innocence or guilt – works in some ways better than others. (Given that Karl Marx was one of the people on that shortlist, it’s hard not to see the sight of him beheading someone as bizarre and almost comical rather than the grand-guignol it’s supposed to be). But all-in-all it’s an engaging mystery with the right amount of mood and pacing and internal logic. The adaptation of  Peter Ackroyd’s 1994 murder mystery novel ‘Dan Leno and the Limehouse Golem‘ falls into that category of genuinely ‘clever’ movie and adaptation where you do need to pay attention to the story. Hindsight, red-herrings and unreliable narration play their part and your enjoyment will be affected by how much you guess, deduct or work out ahead of any carefully-planned on-screen revelations.

The Limehouse Golem plays with our sympathies, directing us to feel pity and anger and understand the various characters’ actions and then shifting the moral centre as

Kildaire is a largely buttoned-up role, the kind of awkward outlier that Nighy always delivers with aplomb. In this case he’s a character who may or may not be gay, but feels largely at odds with the world around him – aware of others ambitions and foibles but finding them annoying only when they stop him doing his job. It’s interesting to wonder what Alan Rickman, who was due to play the part before fading health forced him to drop out, would have made of the role – likely quite different but just as compelling.

Rising star Olivia Cooke (recently seen in Bates Motel and soon to play a significant part in Ready Player One) is strong as the empowered Lizzie Cree, now standing in the shadow of a hangman’s noose , but seen in the film’s flashbacks as a vibrant young woman and ingenue who all too often found herself a victim of others’ agendas and brutality. Cooke delivers all sides to the character with growing confidence and it will be interesting to see how her career develops.

Douglas Booth essays the role of Dan Leno, a genuine historical figure and one of the musical hall’s first renowned ‘dames’ and cross-dressing pantomime fixtures.  It’s partly through his eyes and performance that we see the tale begin, with a promise that we’re actually starting at the end not the beginning. Booth gives us very different convincing on-and-off stage personas and by the time the curtain comes down and the credits roll, he’s given the theatre and home audiences a strong performance. Other familiar faces and names also appear. Eddie Marsden (as the theatre owner), Daniel Mays as Kildaire’s assistant round off a talented cast.

Released earlier this year, the film didn’t make a notable impact on screens, but its DVD/Blu-ray release should provide it a better arena to make its mark.

The Limehouse Golem is now available on DVD and blu-ray 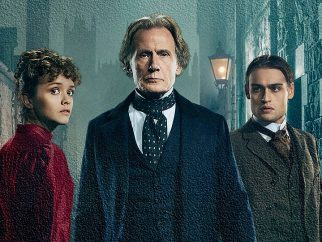 To Blackly Go (through a Mirror, Boldly)…