Cassian Andor and the prisoners of Narkina 5 are kept under lock and key and close scrutiny and escape seems impossible, but can the inmates take a moment of singular opportunity to strike back against their captors and flee their confinement. To do so Andor and taskmaster Loy are going to have to trust each other and have everyone work together to seize their chance.

A galaxy away, Luthen Rael is also dealing with someone who wants to escape the clutches of the Empire, but Luthen is not sympathetic to the choice and is forced to explain what he has given up himself to be part of the Rebellion.

It seems that for everyone, there’s only One Way Out or none at all… but at what cost?

“There is only one way out. Play it how you want, but I’m going to assume I’m dead and take it from there…”

This week’s One Way Out is a chapter that highlights, once again, the skills of Andor’s impressive supporting cast, though thankfully, Cassian Andor isn’t reduced to the frowning bystander of events like he’s been in a few too many entries.

Diego Luna’s Cassian, title figure though he is, has often been a reactive force, the kind of guy who isn’t inherently brave but is resourceful – he seemingly can’t avoid trouble but is always on alert to spot a way out thereafter.  That being said, he’s grumbled around the prison complex for the last three episodes with much consternation but very little progress, essentially trying to work out a plan in specific detail before executing it – a parallel with the Aldhani arc of episodes. The workforce floor of the Narkina 5 prison remains a well-designed yet minimalist environment, an ode to white sterility and hopelessness, the prisoners like reluctant but obedient bees in a hive driven by the purpose of merely surviving the day. The voice over the tannoy (which has always seemed familiar, but I think now is like the voice of the Vogon Poet in HHGTTG) is soulless, but it’s nice when, later in the episode, the person behind the voice is revealed to be a weak and ineffectual, their timid and inconsequential tones altered to deliver banal menace. Now, realising that the loss of Christopher Fairbank’s Ulaf in last week’s episode will mean that a replacement worker will be coming in (and at a time when the complex is under-staffed) Andor keeps pressing Kino Loy (Andy Serkis) that this might be the one and only opportunity they have to rebel and flee the base.

He takes some convincing but, with Loy now on their side, the team know just when and where to strike and as the clock ticks down, they ultimately do with some losses but steady success, the Imperial soldiers being caught off-guard by a force they thought they’d successfully subjugated and subdued into service. Like the Aldhani raid, this allows the episode to kick into a higher gear with more obvious and immediate stakes, plenty of gunfire and hand-to-hand combat. This isn’t some big movie set-piece, but an earnest, kinetic section of the episode that allows us to witness the shift of power… rather than people simply talking about it and planning for it. Wisely, director Tony Gilroy – who handles the action and quieter moments equally well – decides to make this play with the dramatic beats of a contemporary, conventional prison-break rather than a cosmic adventure (no badly-aiming stormtrooper here, thank you very much) and it helps to keep things grounded and intense. As others have noted, Andor often seems at its best when it’s keeping the main Star Wars vibe at arm’s length and carving out a distinctly different niche alongside it.

Serkis is no less than excellent, the taskmaster who’s finally convinced by Andor to seize the rare moment the crew have to escape their work-level and lead a full-on revolution across the complex. As Kino Loy, Serkis gives us a nuanced character in expression and action, one whose adherence to the system as a way to ‘survive and get released’ is finally fractured when he realises he’s been played for a fool by the prison’s powers-that-be and that Andor is right: that this may be his only chance to get out and maybe even survive, though he fully expects to die in the process. And yet, even as those plans come to fruition, Serkis’ Loy is equally vulnerable as he is furious. When he needs to become the voice over the tannoy it’s like Orwell’s Winston being given the chance to be Big Brother for a moment and he can’t actually find the words that would usually come to him in an instant. It’s Andor who both persuades and chides him forward and makes him rise to the occasion. It was tempting to think that the story would have the usual effective (but familiar) trope of having Loy be cut down after his personal epiphany and moment of triumph, but the script and story actually plays it even better and more bittersweet. Even as the prisoners escape, the story offers us a superbly forlorn moment where Serkis’ escape is halted at the last moment when all the others are diving into the cold depths of the seas surrounding the facility and Loy is forced to admit he can’t jump because… he doesn’t know how to swim. The last we see of him is a shot of wide-eyed anguish and then Andor is caught in the rush off the ledge. Loy’s fate is technically left ambiguous so we might yet see him again, though if not, it’s a nuanced ending for a character who has only been in a handful of episodes and more often as an antagonist. It’s one of the things this series does well – introduce incidental or short-term characters and make us care, the opposite of many feature films with other masters to serve.

Across the galaxy, Stellan Skarsgård’s portrayal of spymaster Luthen continues to be a force to be reckoned with.  He goes to meet with Lonni Jung (Robert Emms), the Imperial intelligence officer revealed this episode as an embedded spy for the rebellion and who risks a lot to bring Luthen valuable information about Deera Meero (Denise Gough) and her deceptions (and – along with last week’s events – that puts paid to any idea Meero is also a rebel spy). Lonni has a family in ever increasing danger and wants out, saying he’s risked everything and now has more to lose than ever. Luthen, pragmatic to a fault, isn’t remotely interested in cutting him loose as an asset and refuses to let him leave his position. Luthen delivers a great oratory when challenged about what he’s personally given up for the cause and how much his adoption of the enemy’s tactics will have ultimately tainted him for life. The catch is that a genuinely stirring, powerful speech though it it undeniably is, it’s almost too good and extended to feel as spontaneous as it should, going on for several minutes as it scythes through challenges with all the verbal skill of a person who could likely raise armies with such rhetoric if he wasn’t busy sculpting subterfuge in the shadows. In short, it feels like a speech that should have been made from a lectern by a statesman in front of a crowd not a lowly rebel with understandably cold feet. But this and Serkis’ contribution form the steely spine and backbone that hold this episode aloft.

We also have Mon Mothma (Genevieve O’Reilly) trying to negotiate her way through the faux niceties of high society to get money for the rebel cause. She’s found herself in the orbit of a notoriously unscrupulous but savvy money-lender who is willing to be the money-man in the equation. His terms seem better than could be expected, but when he says his payment is a meeting between his son and Mothma’s own daughter, Mon sees it for the power-move that it sis. (The hint is, at least, that such a meeting could be seen as a betrothal or commitment of sorts and even though Mon’s daughter is an icy teenager who’s blatantly allied more with her father, Mon isn’t going to use her as a chess-piece to achieve her aims or provide further corruption to invade her sanctum and endanger their lives). One expects that in the next few episodes, the conversation will be revisited.

There’s only two episodes left in this initial run. The pacing through the season may have been a little off, the slower story-elements a surprise for those expecting a whizz-bang approach like many Star Wars projects, but those slow-burn aspects have largely worked and the pay-offs have been worth the wait, so it will be interesting to see how things come to a head with those threads starting to enter each other’s orbits and building up the stakes… 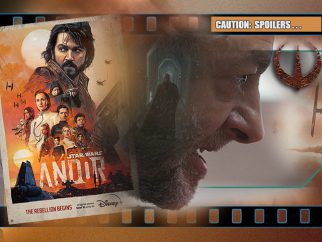