It's the penultimate episode and the bullets fly, heroes fall and the undead climb...

The survivors have reunited and discover a way back into the Commonwealth and – with the aid of Mercer finally choosing a side – look to surprise Pamela Milton. But Milton has her own strategy in play and she’s willing to get her own hands dirty to ensure a victory.

And outside the city the dead are gathering in force, ready to breach the walls and this time it looks like – one way or another – some heroes will fall…

Last week’s episode, Faith, started to finally ramp up the tensions and Family continues that as the survivors head to the Commonwealth. For all the fearless talk, it’s not entirely clear what they intend to do when they get there. They may know that Mercer is on their side and ready to ‘Fuck things up‘, but unless he’s got all the soldiers with him then it feels a little like a dramatic Hail Mary.

Judith Grimes (Cailey Fleming) has largely been overlooked in recent seasons and the writers seem to vacillate between making her a brave, pint-size Grimes in her own right and wise beyond her years… or having her as a child who frequently gets into precocious child who gets into precarious situations. Here, her opening monologue (a recurring lynchpin of these final episodes) strikes close to home and proves very effective, talking about how the survivors have made it through the years across a montage of all their weapons being taken out of a collective box – a sign that the characters and the show are taking up arms again. She later calls her fellow survivors to account, reminding them that to fulfil Rick’s dream they have to fight the good fight not just for today but also look to the tomorrow. Essentially, it’s all about legacy.

It’s probably no real surprise that the Union Station entrance turns out to be a trap with the survivors pinned down and several of them killed outright. It’s not Mercer who has betrayed them, but Pamela Milton who worked out that if Mercer was being circumspect then his pulling of troops might indicate the exploited weak-points he left. It’s a kinetic, fast-paced set-piece and for a moment it looks like a lot of prominent characters are going to be killed.  But it’s something of a genuine shock when Judith is felled by a bullet from Pamela Milton’s own gun – Judith pushing Maggie out of the way at the last second and taking the impact. This moves Milton firmly from the ‘heartless politician’ column into a ‘getting-her-hands-dirty Big Bad’ which arguably takes away some of the nuance of the character, but one suspects she’ll get her comeuppance soon enough. It’s also hard to believe they’ll actually kill Judith… the show, once so nihilistic that no-one was safe has become a little safer nowadays and losing Judith would swing the barometer too far the other way (she’s the show’s answer to Carl, so there’s a good chance she’ll survive even without her own spin-off) so expect her adoptive-father Daryl to succeed in whisking her for emergency treatment.

And herein lies some of the obvious trouble that has really taken the wind out of the sails and the tension out of proceedings: controversially announcing those upcoming various spin-offs – unless they are a clever deception – removes the chance that any of the characters associated with them will die. Under normal circumstances, given the track record of the show and the fact that it is the main show’s ending, everything and everyone would be up for grabs (remember, *extra spoiler space* in the comics, creator Robert Kirkman actually did kill off Rick Grimes in the closing chapters). Last week’s scenes with Negan about to sacrifice himself really don’t carry the weight they should and the likelihood of significant cast casualties in next week’s finale becomes limited to a handful of names that fall between ‘Haven’t got an announced spin-off to high-value stunt deaths because it’s the finale).

Aaron (Ross Marquand), Lydia (Cassady McClincy), Elijah (Okea Eme-Akwari), Luke (Dan Fogler) and Jules (Alex Sgambati) are hidden within the horde of the undead heading towards the Commonwealth and planning to discreetly exit as soon as they can, but it becomes clear the Commonwealth soldiers are herding them towards the city. When they spot an abandoned caravan they edge their way towards it but in the surge forward, they get separated, with Elijah and Jules being carried onwards and Lydia receiving a bite to the arm. Aaron, who had a similar problem a few seasons back, knows what’s needed and they prepare Lydia for immediate amputation… and, of course, no anesthetic. She appears to survive in the short-term but will it be enough?

Milton was using the horde as a distraction for the masses, but her game-play falters when it becomes clear that the mass of the marching undead have become a genuine problem when they start to actually breach the gates of the city. Just a few episodes ago we (and Aaron) saw a Walker climbing a ladder and last week one figure noticeably had the ability to reach down and pick up a discarded knife. It’s this kind of ability and awareness that speaks to the ‘variants’ being more common than Aaron first mused and therefore making the undead a real threat in the dying hours of the show. It is an interesting development, to be sure, but like several factors, it comes so late in the day that it feels like a hand-brake decision, executed for tension rather than logical progression (though it was an element of the original, early seasons that got discarded along the highway like unwanted roadkill).

A very good episode of the show, but as a penultimate episode it doesn’t feel like we’re that close to the absolute ending. The series finale of The Walking Dead, due to be shown on 20th November to subscribers and viewers alike is called Rest in Peace, but one suspects a lot of noise in the days gone bye and going forward. 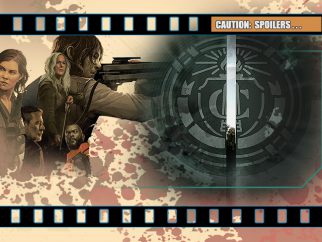