There are many cogs in the wheels keeping the Empire and the Rebellion's efforts going, but are some worth more dead than alive?

Cassian Andor has made his way back to Ferrix, but he’s not greeted by the warm welcome he was naively expecting. Instead, it’s clear that there’s very little left for him there and the money he’s earned from the Aldhani job may be better spent buying him a lower profile. The Empire is in no mood to give any of the star-systems under their heel any kind of even break and the result of the robbery is an ever-more oppressive lockdown. Can Cassian avoid any more run-ins with the local Empire forces and can he talk his way out of the bad situations in which he finds himself?

Elsewhere Mon Mothma contemplates the cost of working with Luthen and what her next moves should be and at the ISB, Imperial officer Dedra finally starts to make headway with convincing her bosses of the rebellion’s possible plans…

Though the pace is still pretty glacial, there’s a subtle change of style in this week’s Andor, some of it working better than others.

If last week’s episode seemed to finally increase the momentum and serve up the raid we’ve been waiting for, the latest entry, Announcement, (directed by Benjamin Caron) returns us to the sure and steady feeling of a suburban setting with subversive elements. That’s not to say there isn’t something delightfully sinister and telling about the way that dictatorship can use their heels, finances and overt bullying tactics rather than planet-destroying weapons to get what they want and one of the triumphs of Andor is that while Star Wars was Saturday Morning adventure ™, this series is the one acknowledging the grey areas and collective collateral damage along the way.

Now that he has some credits at his disposal, it is somewhat understandable that Cassian Andor would make his way back to Ferrix in an effort to get his adopted mother Maarva (the always essential Fiona Shaw) and stuttering droid to come away with him to relative safety and pay off his debts. But after dwelling on the minutiae of planning thus far, the episode paints his arrival in broad strokes and offers no real explanation of how he managed to get there after he absconded with his share of the raid’s loot last week. He left Ferrix dramatically at the end of the third episode, he’s a wanted felon with his name and face distributed across the known galaxy and his sector is feeling a strangle-hold on its populace after news of the Aldhani heist starts to filter out. Yet here he is, strolling in, knocking on Maarva’s door, visiting his old haunts and his attempts to keep from getting noticed seem to stretch to putting his hood up and skulking around the corners of the streets. Maarva has affection for her ‘son’ but no real time. The news of the Aldhani heist has reinvigorated her sense of rebellion and, with a huge dose of irony, she notes that Cassian doesn’t have the kind of drive of whomever pulled off the raid. One hopes she doesn’t do something too dangerous, though if anyone can deliver some self-sacrifice with style, it’s a Shaw thing. Cassian also visits Bix who – somewhat understandably after being bruised and battered in the wake of his departure – doesn’t have much time for him. It’s a briefer scene than is really needed, but it is filled with disappointment and recrimination, most of it earned.

On top of that Cassian then manages to move (again, off-screen) on to another world, a past-its-prime-if-it-ever-had-one region of Niamos (introduced with an aerial shot that’s one part Miami Vice, one part Jurassic Park complete with a flock of CGI birds) and with a new moniker ‘Keev’, wakes up after spending the night (likely many, as time seems to have passed) with a random girl, re-hiding his loot and going out for a stroll to take in the sea air. (It’s another of those weird sequences and segues that make you wonder why such creative decisions were made. Wouldn’t this have made more sense to shoot in an already-constructed, anonymous street or alleyway instead of a new, big but largely cheap and one-use-and-done unmemorable area?)  It’s of little surprise when he’s randomly stopped by a bored storm-trooper, though clearly no-one’s got that urgent memo about his ‘crimes’ and he gets to be taken into custody as just a random street pick-up, aiming to easily fake his name. The less good news is that the new sentencing laws mean he’s getting at least six months for little more than jay-walking. (Handed down, if I’m not mistaken, by Highlander‘s Beatie Edney).  The only compelling things about the Niamos scenes is the innate sense of general bullying and intimidation tactics being used on a street-level by the Empire and also the appearance of a K2SO-like droid that nearly strangles him over a linguistic hiccup.

Syril’s story plods along, the ‘nowhere man of Imperial middle management’ (given a wonderfully despondent and resentful tone by Kyle Soller) gets a new job in a vast, open-plan pod-arena, the sterile pen-pushing bureaucratic interior of the Bureau of Standards, a department that looks and sounds more like a Terry Gilliam nightmare than a George Lucas dream. It’s clear that there’s more to come with Syril’s story as to linger on him otherwise would be tedious melancholy filler without a pay-off. Obviously, we’re supposed to juxtapose the rise and fall (or fall and rise) of the cogs on opposing sides of the Rebellion/Empire struggle but one hopes that Syril’s fortunes change in some notable way before Mother’s breakfast choices become the hot subject of the day.

Mon Mothma (Genevieve O’Reilly) is forced to go through with her dinner party, still angry that Luthen (Stellan Skarsgård) is behind the heist and forcing her hand. She decides to trust a political adversary (Tay Kolma – played by Ben Miles), an old school-friend with whom she’s close but who feels Mothma isn’t as pro-active against the Empire as he is). It’s likely to be a mistake (because…. drama), but we’ll see how it plays out. One thing the show has done well is play with big and little ‘P’ politics. The Empire may be the fascistic scum of the universe, but Luthen and his assistant (Elizabeth Dulau’s Kleya, more dynamic here than in all her appearances so far, striding through the walkways with a look of a pissed-of Princess Leia) makes it very clear to Faye Marsay’s  Vel Sartha (now on Coruscant, cleaned up nicely and better attired) that they consider Andor a loose end who knows a little too much and should be eliminated, despite his ‘heroics’. Equally Luthen insists he’s a big picture guy and that the suffering of people under the Empire’s thumb across the sector is not just an unfortunate consequence, but a desired damage in an effort to undermine the Empire and create discontent. It paints the Rebellion as far less than the angelic underdogs of the original trilogy.

On the ISB (Imperial Security Bureau) hub Dedra Metro (Denise Gough) plays her own political strategies, out-maneuvering her ambitious cohorts and winning the approval of her ‘by-any-means’ superior Major Partagaz (Anton Lesser). Again, this is a close-up examining of the intricacies of oppression, showing the string of decisions needed for events to happen and how supposedly minor cogs in the wheel are the heart of ’cause and effect’ in the wider world(s). Dedra’s progress feels like a slow-brewing story-strand likely to develop in the tail-end of the season and I wouldn’t be surprised to find some twists about her allegiances as we get there.

Benjamin Caron’s direction combined with the developments of each character are interesting. Sharp-eyed viewers have been able to see plenty of easter-eggs in  the show so far. There’s been an assortment of tweaked devices and background props, some more obvious than others…but for some reason, this episode really doesn’t do much to disguise things. If  the sea-front looks like a bad day at a retrograde Pontins, then here and there and elsewhere we see equally drab pressure-cookers and water-filters that look like they’ve been brought to set from a thrift store and dumped. Never has the galaxy far, far away, looked more down, down to earth – for better or worse.  The show is in no rush to get where it’s going and every scene celebrates the underdogs (of every political hue) tracing their paths as the pass or collide.

So far it’s superior in ambition and impressive in the result because it’s not playing to the expected template, but it’s also more accurately ‘ interesting’ rather than ‘entertaining’, per se… 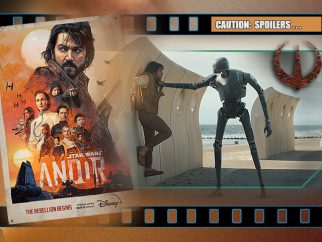