As time grows short, there's some temporary alliances made.... but the time has come to finally choose sides...

In the aftermath of the Founders Day events, Eugene is now in custody and Pamela Milton decrees that there must be a show trial to prove to the people of the Commonwealth that Milton has restored order. She strong-arms Yumiko into being the prosecutor for the trial, warning her of the consequences if she doesn’t, but as Yumiko takes the pulpit at a hastily-arranged press conference, she has some hard choices to make.

Meanwhile, Daryl and Carol realise that their fellow survivors are being rounded up and, evading capture, they head to the prison where Hornsby is being held. He may be duplicitous and untrustworthy, but he’s their best bet of getting outside the Commonwealth walls and finding their friends…

There’s definitely a sense that though The Walking Dead remains a series with roaming corpses and staggering skeletons barely covered in rotting flesh, this last run (reflecting the source-material’s last story-arc) is far more about human monsters and the way that people are surviving rather than just the mere nature of avoiding getting bitten by carnivorous cadavers… It’s always had elements of that angle – the most memorable threats haven’t been individual walkers and zombies but the human sociopaths and war-mongers such as The Governor, Alpha and, yes, Negan – but now we’re overtly talking about socio-political commentary, how people revert to old patterns of power as the world itself crumbles. For a show that once had people sawing off their own limbs to survive, one of the turning points of this end run is a leaflet-drop condemning the Commonwealth leaders and the audio-recording of a petulant entitled brat pouring scorn on the populace.

That’s not to wholly condemn the show – Rick Grimes himself pointed out that the phrase of ‘the Walking Dead‘ was more about the remaining humans trying to survive yet knowing that when they die, regardless of the age or being bitten or not, they rise again like some ill-fated soulless beastie of myth. But these post-apocalyptic end-days of the AMC adaptation are having to find a balance between honouring what has come before and knowing that, unlike the Robert Kirkman / Image comic story, it’s not over when the last page is turned and credits on the last episode of this main show roll. We already know of three spin-offs in various stages of production.

So, these last episodes are largely about our remaining ‘heroes’ tackling the Commonwealth’s innate corruption, trying to survive the way this new world is clinging to the old and likely to grind them in the process.

We left last week’s episode with Eugene Porter (Josh McDermitt) handing himself in and now we see that Pamela Milton is now going to have a show-trial. For the most part Pamela Milton has simply been an aloof political figure, a generational wielder of power, happy to glad-hand the faithful and have plausible deniability for some of the backroom deals she’s made to survive. She’s now in a much more proactive, circle-the-wagons frame of mind, partly driven by the loss of the wretched (but to her loved/tolerated) Sebastian but also the continued sense of entitlement of her position.  She may not be ducking and diving with the undead in the dark and unforgiving woods, but, at least mentally, he’s now operating on a primal survival level and that drive and her position of power makes her a formidable opponent. Given the way she strong-arms and threatens Eleanor Matsuura’s legal-eagle Yumiko into representing the city’s interests in a kangaroo-court case against Eugene, we’re now at the point where’s she’s definitively the bad-guy even if her hands are always Clorexed.  The fact that Yumiko, realising the importance of any actions she takes having consequences for people she cares about, manages to essentially hijack the bully pulpit and turn Milton’s own plans against her (announcing that she’s going to represent Eugene not the Commonwealth) is one of the episode’s satisfying moments.

Daryl and Carol realise that the Alexandrians/Hill-Toppers are being rounded up – likely to be used as hostages or at least as negotiating tactics and narrowly avoid being taken into custody. Ultimately, they also  realise they’ll need help to continuing to evade the Commonwealth troops and manage to make it outside the walls, bringing the duplicitous Hornsby (Josh Hamilton) with them. At first he looks like he’s going into some fugue state after his near-death battle in his cell, but it isn’t long before he’s back to his own ways, leading them through dark tunnels and quite obviously plotting his moment to escape. It’s not to be – even Hornsby can’t slither away from this. It’s probably a tribute to Hamilton’s performance that there will likely be cheers as Hornsby meets his inevitable, grisly fate. Such characters have a way of weaseling into our attention and being entertainingly evil for a time but are marking time before they get their just desserts …and though he’d managed to talk his way out of various potentially deadly situations by doing whatever he had to to survive, it’s fitting that when he’s out-maneuvered by Daryl and Carol, he’s demonstrably out of his class. Both Daryl and Carol are people of action, willing to do what’s nice and pleasant when they can and yet do very hard and unforgiving things without blinking when necessary. They actually give Hornsby a sporting chance, allowed to hobble off if he wants into the wastelands, but he simply can’t resist going for a rifle and it’s the end of him. It’s tempting to almost feel sorry for him as he’s left to bleed out from an arrow to the neck (nice shot, Daryl), but only almost – he lived by the sword, died by the arrow and he’s the kind of ruthless sociopath that very much needed that on-screen comeuppance.  One can only hope his corpse doesn’t cause as many problems.

Next week, we’ll find out where those missing survivors have been taken, but things might be about to get worse before they get better… 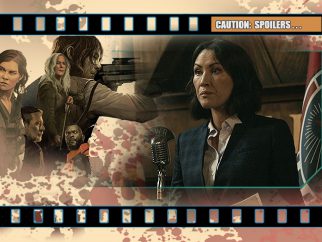