Andor has managed to flee Fennex, leaving his friends behind. Luthen Rael says he’s willing to drop him off at the nearest safehold but would rather he join a group trying to make strategic strikes against the Empire. Reluctantly – and only for a decent pay-off – Andor agrees to the deal. However on arrival he’s greeted with frustration and suspicion by the existing team.

As Rael returns to the glittering high-rises of Courascant, he assumes the robes and demeanour of the art-seller persona that provides his cover, but when diplomat Mon Mothma arrives, it’s clear their subversive plans are not going well… and far away more Empire officers are examining recent events and slowly and surely, they are drawing up their own plans…

The slow, methodic momentum of the first three episodes of Andor were somewhat off-set by the drop of them streaming together, enabling a short-term binge-watch that delivered a strong opening arc. But with a fourth episode (‘Aldhani‘) going out in solitary fashion (single new episodes coming out every Wednesday), it’s easier to feel the pace still being slow and yet, in some respects, somehow sustaining a tense, dynamic atmosphere that defies the normal format of such shows…

Star Wars has often been seen as an action franchise, but those of us who were there first often recall that quiet moment in the original film (aka A New Hope) where Luke walks out wordlessly from his home and looks out beyond the setting suns into a future he wished to be different (lesson, kid: be careful what you wish for). It was one of the rare – but key – understated moments that were so important but were arguably missing from later chapters that were more concerned with thrust and speed. John Williams’ famous rousing notes told us more than words ever could and made us identify with Luke’s hopes and dreams, however futile they seemed. There’s very little of those ‘fanfare’ moments in Andor to date, but it’s interesting and compelling that it’s the more mundane and universally recognisable moments that have actually sung the loudest and resonated the most thus far. All the settings ring true because they don’t feel far, far away.  There’s the insipid, bleak corridors of power populated by equally sterile bureaucrats; middle-management angst played out with crumbling provincial politics and housing estates where the detritus of the lowest and grandest of dreams go to die in self-pity.  Scenes – that would be positively ‘Ken Loach-ian’ levels of woe in *any* other everyday setting – being played out in a small corner of a blockbuster canvas.  Any minute now I feel like I’m legitimately see Bernard Hill as a Senator saying “Gizza lightsaber. Go on, gizza lightsaber. I can do that…”

Yet, bittersweet though it is, it isn’t depressing… its hope is chiseled, fractured and weathered but still holding on. It’s a series that’s exploring in detail the reasons that people fight back, willing to take on impossible odds with very little hope of victory but a drive to propel them out of a dissatisfying alternative. This is mostly due to the writing work of Tony Gilroy and brother Dan. Tony Gilroy, of course, directed Rogue One (for which this is a direct prequel) but it’s as much his work writing (and sometimes directing) the likes of Michael Clayton and the Bourne movies that’s self-evident in each episode. As noted when we were reviewing the openers, it’s character is key here and though we’re inevitably going to see more actions in the skies and stars, Gilroy is building up the personal stakes and presenting character studies of subversion in action.

It’s interesting that Diego Luna, in the title role, is as good as ever but far less central to proceedings here and surrounded by top-notch performers – making that ‘Andor‘ moniker feel like it should have had a more ensemble name.

Stellan Skarsgård is a remarkable actor and his Luthen Rael is a swirling mass of complexity. Based on the first three episodes it was easy to see him as a grizzled mover-and-shaker acting just below the radar, humourless and driven and ever the pragmatist. Here we see the reasons he keeps such a low profile… his ‘day-job’ as a high-end art collector and seller offers a more theatrical exuberance and with just a hair-piece, some flowing robes and the appearance of total propriety,  we see him catering to the wealthy of galactic hub Courasant. Skarsgård sells every minute with deceptive glee but  -though hidden from his influential customers – there’s no doubt to the audience of the contempt he has for the Empire’s machinations.

There’s no sign of many of the other supporting cast to whom we were introduced last time, all left behind on Fennix – but their importance in that opening salvo means it’s unlikely we’re done with them – and more Fiona Shaw will always be good.  (We do get to see Empire middle-management underlings – Rupert Vansittart’s Chief Hyne, Alex Ferns’ Sergeant Linus Mosk and Kyle Soller’s petulant Syril Karn – getting reprimanded for last week’s fiasco with the latter slinking home to his disappointed mother who slaps him for his failures then embraces him – a very ‘mother’ moment).

Instead there’s new characters as Cassian gets passed along the chain of the rebellion by Luthen and finds himself on a more rural backwater planet where he is to assist a small group about to attack an under-manned Empire depot that has a significant arsenal of weapons.  Faye Marsay as committed rebel Vel Sartha strikes just the right note of frustration when Cassian is delivered, unannounced by Luthen and foisted upon her against her wishes. The small-knit group (also including Alex Lawther, Ebon Moss-Bachrach, Varada Sethu and Gershwyn Eustache Jnr) ae just as cautious, suspicious and underwhelmed but make a formidably-tight knit cell, all knowing they could be on a suicide mission if things go awry. On the flip-side, we equally explore the ranks within the Empire. Lucy Russell’s Supervisor Grandi is an apparently ambitious figure (battling the equally ambitious but more consolidated Lieutenant Supervisor Blevin played by Ben Bailey Smith) but there may be more to her methods and actions than meets the eye. The reliable Anton Lesser essays a cold and demanding Major Partagaz, a no-nonsense commander certainly on his way to grand Moff status if he survives.

Importantly, Aldhani also formally introduces Mon Mothma to the fray, a character who was/ is key to the rebellion in the years to come, but was often treated as a background motivational figure in the earlier movies.  Irish-born, Australia-raised Genevieve O’Reilly slips back into the role she first played in Revenge of the Sith (2005) and which she has reprised in Rogue One and the animated Star Wars: Rebels. O’Reilly brings a sense of nobility to the high-ranking diplomat, a character that inhabits a far grander and bespoke life than most. But though chided into more action by a frustrated Rael, O’Reilly’s Mothma easily conveys the nervous, tension-filled, high-stakes game that she is playing… a secret funder and strategist for the Rebellion but one who can only hold back suspicion over such alliances for so long from the rising political forces at work on the planet and beyond. She’s aware of the growing scrutiny and the troubles it will inevitably bring. She’s a committed figure, but the upcoming dinner-banquet she is forced to participate in will likely be a masterclass in subtext.

All in all, this remains must-see television and potentially likely to draw in those who might not otherwise have steered themselves towards a Star Wars show. Imagine the events taking place in inner-city streets, front-line woods and with distant overseers and distant planets bear all the hallmarks of places like Ukraine. Star Wars with neither a Jedi or Force majestic in sight has never felt more relevant… 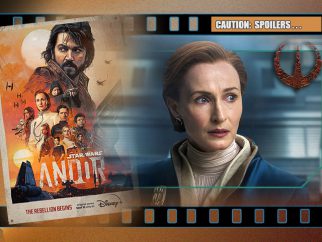