When facing yet more trials and tribulations in her life, Jen 'finds herself' on an unexpected trip of self-discovery...

Jen may have finally found a decent guy at least week’s wedding, but she’s playing it slow and going on a series of dates before jumping in with both emerald feet. However, when Josh doesn’t call her back and the only call is for her to check up on Emil Blonsky’s ankle-monitor, it appears the weekend may be quietly going to hell.

Will it continue to be an abomination or could Blonsky’s self-help retreat actually bring some unexpected solace?

Over the years the situation regarding female superheroes has improved little by little. Though there are still templates at work, they are less and less written in as mere decoration to a male lead.  Fridging still exists and it was less than a decade ago when movie tie-in toys were still rewriting narratives to place male hero action-figures in scenes that spotlighted the female heroes. Studios have creakingly shifted their self-fulfilling stance on ‘women don’t sell action movies‘ and in the cases of success and failures featuring them – Wonder Woman, Captain Marvel, Black Widow etc  – the box-office and critical response has largely been down to other obvious factors (individual writing, direction  etc) which have, admittedly, varied. Yes, there are still some Neanderthals out there who still think the mere idea of women not shutting up and putting up with classic tropes is somehow an insult to their fragile masculine pride, but there’s far more who are now willing to critique a show/film on a variety of merits where gender is neither a sword nor a shield. It’s all in the execution.

She-Hulk: Attorney at Law has been a delicious opportunity to skewer some of the toxicity circling on social media platforms, sometimes by overtly commenting on it directly and sometimes by the sheer fact of turning up every week and making it a relatively successful female-led show. In that sense, it’s Marvel‘s most pivotal series to date but ironically can also sometimes feel like a series of sketches and DVD extra material stretched to fill even thirty minutes.

And I can’t lie that in watching the latest episode and the mystery of why Jen’s new boyfriend Josh (Trevor Salter) hasn’t been returning her calls, I was repeatedly muttering ‘Don’t go down the ‘all men are bastards route, Don’t go down the ‘all men are bastards route‘ only to grimace when it turns out he’s exactly that… Josh not being the nice guy we saw last week at the wedding but someone who has been playing the long-game of getting her into bed and then managing to get a sample of her irradiated blood for some unseen leader…or Leader? (I’m not going to even ask how). The early-dating mishaps – with ego-driven guys who were obsessed with Jen’s alter-ego (or their own egos to unmanageable degrees) – were a fun if predictable plot device to allow Jen to discover what she didn’t and need want as much as she did (and then using them as props for her Titania courtroom battle) and the presence of a misogynistic website that’s trolling her may lead to more… but it does seem that there aren’t any capable nice guys in the show. While the female regulars have obvious quirks and foibles, they are undeniably seen as strong and capable. On the male side there’s not one male character that isn’t weak, a parody or using Jen in some way. (Perhaps we can give Josh Segarra’s ‘Pug’ a pass, but he’s largely been used for punchlines so far).  For a show that’s doubling-down (understandably) on female empowerment, it’s just a shame that we can’t have some regular, positive male characters applauding it rather than being obstacles.

To be fair, this episode does give us Emil Blonsky’s unlikely self-help group who help Jen through this self-worth dilemma for the episode – a myriad of existing minor Marvel characters such as Porcupine, Man-Bull, El Aguila and Saracen that even a full-on fan-boy might be pushed to recognise in the moment. The all-male group, wacky and dysfunctional to the last, enable some great ensemble banter and a fourth-wall breaking ‘Previously on…‘ for Jen when she also notes that a member of the group is none other than part of the Wrecking crew that tried to ‘syringe’ her a couple of weeks ago. He seems to be genuinely sorry for the assault but the timing is also suspicious bearing in mind what’s going on with Josh. That being said this Retreat (or is it more a strategic withdrawal?) works as a standalone comic slice of humorous introspection and what would be a nice breather between larger story-elements if it wasn’t the case that a lot of She-Hulk episodes are tending to have that vibe in place of actual story. Tatiana Maslany, perhaps a controversial choice when the project was announced, continues to prove her worth every week as the character and pivot around which the chaos swirls and  – actual Hulking not withstanding –  she handles it all wih aplomb, a good representation of what the double-edged idea of success looks like in the modern workplace and dating scene.

There’s two episodes left in this run and it’s going to be interesting if the arc of ‘getting Jen’s blood’ will reach a satisfying conclusion or whether it’s all a connective-tissue lead-up with links to the Thunderbolt movie and Tim Blake Nelson’s potential role as villain… or just be grist for a mill that will be more about comedic slapstick. 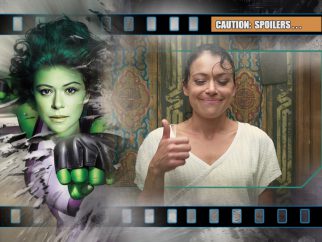