They shouldn't have put him on Atlantis if they didn't want him to make waves?

1998: Ben is  now David Tamara, an astronaut aboard the Atlantis space-shuttle who was apparently killed by unexpected debris during a space-walk during the mission. When a pay-load system fails and the flight’s commander is incapacitated, Atlantis needs to return to Earth immediately for repairs but to do that, the payload has to be readjusted and the only way to do that is from the outside… needing a spacewalk…

Quantum Leap always liked to make brief kisses with history and  either go with smaller, personal stories with history as a framing device or to situate itself close to real aspects of history and pivot away. For all the technical information and use of real footage from the 1998 launch, this voyage aboard Atlantis doesn’t actually match its story with any real-life event, the crisis and crew entirely fictional. However, thematically it does fit with the mood of the time with Atlantis in full operation and a very cautious, evolving co-operation that would eventually see the Atlantis legitimately connect with the Russian’s Mir station in the years to come

Much of the episode is themed around the notions of trust on both sides of the Leap.  The Atlantris team initially disagree about what to do but it’s Ben/David that reminds them to trust their instincts and improvise under pressure. On the 2022 side, Addison, having found a highly-secured computer drive related to Ben’s decision to Leap isn’t sure where her loyalties lie in her efforts to decode it. She loves Ben but knows that at the very least he’s deceived her on a massive scale and has no real way to know why or if the answer affects her personally and professionally. Equally Magic and Jen have to be pragmatic and question what the implications of that deception may be on a wider scale and realise that Addison may not be totally forthcoming. Poor  programmer Ian is slap bang in the middle, noting that Ben was often the glue that brought all the pieces together and that everyone needs to take a breath and realise they’re the same people approaching the same problem with different mind-sets.

For those of us with deep-set nostalgia it was a nice, if genuinely unexpected, surprise to see Beth Calavicci, Al’s wife, making an appearance and the role being reprised by original star Susan Diol. She only appeared in two episodes of the original run (A Leap for Lisa and the series finale) but in the absence of the late Dean Stockwell and the non-involvement of Scott Bakula it does feel like an attempt to have genuine ties to the original run.  Though it’s a single scene, there’s a solid chance she’ll appear again, especially as daughter Janice Calavicci (Georgina Reilly) looks to be an important part of the modern story and much still to uncover about her connection to Ben. If so, one hopes that Beth will be used well. (The fact that Beth appeared to warn Janice and Janice had been operating from a secret room in the Calavicci basement – that blew up while being searched – surely points to more than a cursory involvement).

There are a list of things that have to be overlooked to make any of this work. Ben chatting with Addison would surely have been overheard by his crew-mates at some point and Janice Calavicci referring to her mother as ‘Beth’ (in a com-discussion with Magic) rather than ‘Mom’ seems like bad writing. Ben finally leaping at the end of the episode also seems likely to leave the real David Tamara in a very precarious and confused state clinging onto Mir.  (Once again, we’re not quite sure how the modern Leaps work – where does the host consciousness go and what do they remember post-Leap?). Equally, I’m no quantum physicist and I appreciate that Robert Yowell, a former space shuttle flight controller served as a technical advisor for the episode, but Ben’s non-Quantum, actual leap at the Mir station feels like it doesn’t understand the gravity of the situation.

The revelation from the thumb-drive is that Ben seems to have been trying to Leap towards a specific time and place deepens the mystery and goes beyond the original imperative to bring Sam Beckett home and then Ben himself. But – conveniently – we and the team still have no idea of the where and when of that end-game mission, so it’s not much to go on.

On the audio side there’s still no sign of the original theme music – indeed, there’s no real theme music at all, just a bland logo which doesn’t inspire confidence… and however apt David Bowie‘s Major Tom may seem in the moment, it’s used to set the tone not the time-period which would so often be the case.

This second episode seems far better plotted and cohesive than the ramshackle pilot – if still a little ‘safe’ and predictable and only moderately better on the FX-side, but it’s still all to play for. It’s a different kind of Quantum Leap to be sure, delivered with affection for the original but also with moments of earnest lip-service and still feeling bound to a modern NBC template. Fans of the original should proceed, stepping with nostalgia but with Leaping with caution… 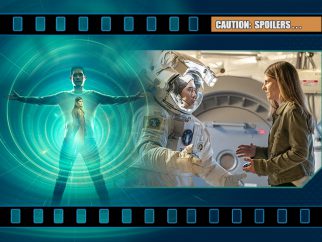