David hears from one of his congregation that her trucker husband has been seeing weird apparations on recent journeys and though David presumes it has more to do with tiredness and fatigue, he agrees to look into the matter. He, Kristen and ben investigate and find that a lot of truckers admit to unease along that stretch of highway and have also seen strange things. The team experience their own encounter when retracing those journeys, but Ben in particular isn’t convinced of a supernatural source.

Meanwhile Sister Andrea continues to find that church forces are being stacked against her by the manipulative Leland and refuses to be shuffled off, demanding that her fate be decided by more than rumour and infernal agenda…

We’ve compared Evil to an ecumenical X-Files on various occasions, but this episode does seem to lean that way even more than most. There’s a spooky stretch of road that seems to produce ghostly figures and erratic radio transmissions, at least some of which might be down to a very human source. We also have shadowy governmental/Vatican agents who are clearly not there to make sure the truth is out there and who have no qualms about using our heroes to do the grunt work before they swoop in and ‘tidy’ things up.  When Vatican Emissary Victor LeConte (Brian d’Arcy James) tells David that the errant farmer who was using the tech to scare people on the highway has committed suicide, neither David nor the audience is likely to believe him and the clarification that said guy was allegedly an up and coming member of one of the ‘evil’ sigil-dividing groups illustrated on that secret map from last season really doesn’t do anything to cleanse the pallete.

David (Mike Colter) continues to feel torn between the mundane aspects of his chosen path, the machinations of those in higher religious offices and the memory of at least partially giving into temptation mere hours after being ordained (though it’s good that the latter is taking something of a back-seat for the moment or this could easily have become a sulphur-tinged soap-opera. Ben the Magnificent (Aasif Mandvi) continues to be as good as his moniker suggests and to also be the middle-ground in the investigating department. Now more enthused by collaborating with his sister Karima (Sohina Sidhu) he’s open to genuine unusual spookiness, but very much tries all reasonably ‘usual’ and more rationale explanations first. He’s the one here that looks at the all the technical weirdness going on on the ‘haunted highway’ and creates a checklist of how each of them could be done by more earthly, electronic means.

It’s good to see Katja Herber’s Kristen straddle the line between pragmatist and ‘kick-ass demon hunter’. Last season she was almost literally ‘possessed’ in some way, altering her personality far too radically. Now, realising that more than just doing her job she also has to be a role-model for her daughters in a world that often likes to have a double-standard when it comes to gender, she first apologises to the idiot whom she clobbered last season for being disrespectful to her in the grocery store (and while we don’t condone violence, he clearly had it coming and only has himself to blame…) but then refuses to be trampled by an opportunistic contractor who thinks she should ‘check with her husband’ when she refuses to change the financing of the job on the house. There’ll be quite a few people in the audiences whooping at the way she asserts herself in such a… enthusiastic way.

It’s not clear quite how much Leland’s infernal influence stretches. Any notion that his attempts to get Sister Andrea drummed out of the local church had been stymied last week by Monsignor Matthew Korecki (Boris McGiver) is quickly put to rest when the church, seemingly acting on Leland’s claims, actively works to get Sister Andrea (Andreas Martin) shuffled off to a remote parish and away from causing trouble.  Is it pro-active red tape to avoid problems or something more sinister? As a proud member of the  National Coalition of American Nuns (NCAN), she’s having none of it. It takes almost the whole episode for David to hear about the issue and step in, putting his priestly foot down hard and making the observation and argument that many of the audience must have also been making – that the church uses Sister Andrea’s visions of demons as a reason she must be losing her marbles but would be quite happy to let things continue as is if  her daily visions were only of angels. It’s clear that the Sister isn’t going anywhere quietly – much to the delight of the audience. 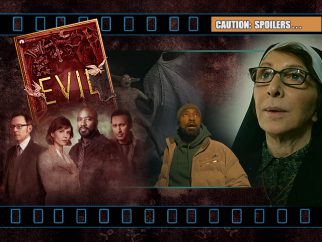 Stranger Things – Still ‘Running up that Hill’ and its running times…