Stranger Things – Still ‘Running up that Hill’ and its running times…

Stranger Things IV's finale was both lonnnng and long overdue. So was its second volume worth waiting for?

Stranger Things success has been that perfect combination of nostalgia and marketing. The complaint that it homages, mines or outright steals from the material that was popular in the 1980s is undeniable – it has never made any secret of the reverence it has for that era and its plot beats and genre offerings confirm it. But to judge it accordingly on that criteria alone might be to miss the whole point.  There are few projects out there where you can’t point to the lineage and the screen giants on which they raise themselves up… even the very best of the last year’s film and tv dramas owe something to the past, therefore it’s not so much an issue of originality rather on how it executes those love-letters to the past and how it makes you feel. And Stranger Things‘  success is also in combining the timelessness of a mythic quest with recalling a specific time of your lives, giving new and old audiences something to like beyond the decorations. Like Stand By Me recalled the 1950s and IT links the decades (no coincidence they’re both Stephen King source material) Stranger Things in its 1980s/early 90s setting brings back a lot of memories for me on a basic level and it allows you to invest in the familiar and unfamiliar as you proceed. If it makes you remember and revisit those movies and shows of old, it’s no bad thing.

There’s a LOT, perhaps too much to fit in here (even in 3 hours and 45 minutes of accumulated running time) so much so that Eleven (Millie Bobbie Brown) feels less centre-stage than usual. For whatever reason, dividing off the characters into different groups may have been practically necessary for shooting to a schedule, but it continued to be distracting – you find yourself having to remember which group is where and by how far they are separated. It’s only at the end of the finale that you’ll also realise that some key characters, despite a deep connection, are sharing the same screen for the first time this entire season. While the Joyce (Winona Ryder)/Hopper (David Harbour)/Murray (Brett Gelman) sojourn to Russia ended up dove-tailing into the climax pretty well – editing combining the essential moments of each arc together-  it often felt like a different production entirely and seems like an artificial extension of the Demogorgan creature mythology and  – more obviously – a way to keep the adults away from the kids and yet still be part of the show. Might it have been better to slim down the cast/story to have them written out for a while and come back later in the same way that the Narnia books sometimes moved on to side characters moving centre-stage? Instead, it all feels fun but a bit crammed – a celebration of the entire run to date and tying up a LOT of information. (It was good to see Matthew Modine back, but it might have been better to have him just in flashbacks and when the bad army guys show up at the Nina base, you may suddenly note you’d forgotten all about them with everything else going on).

Though played with panache and great prosthetics One/Vecna/Henry Creel, (Jamie Campbell Bower) becomes a decent antagonist without being quite as ultimately classic as the build-up suggested. He’s reduced to a background bogeyman for most of the penultimate episode and then postures in his villainy before the inevitable (though likely temporary) defeat. You’re going to be boo-hissing him as he strides around quite sure of himself and inflicting damage and death, but while that ‘defeat’ looks great on screen, the very fact that – spoiler – he’s going to be back negates some of the intended impact.

The issue of Will Byers’ sexuality has become a side-talking point on the internet. The series has never addressed it head on, though there were nods to Will (Noah Schnapp) feeling socially-awkward that audiences likely picked up on in the recent episodes and here it’s certainly more overt if you want it to be – him telling Mike (Finn Wolfhard) that the importance of loving someone is being there for them in both the said and unsaid actions and brother Jonathan (Leeds-born Charlie Heaton) assures him that whatever Will can’t talk about is something that he’ll be willing to talk about unconditionally when Will eventually feels comfortable. There may be more to come on that arc, but the show threads the needle well – making it feel a relevant issue for today’s audience without retro-fitting in a too-easy-fix which wouldn’t have been as realistic with attitudes in the period setting. (For me, the slowburn romantic yearnings of Maya Hawke’s Robin felt more organic).

The decision to separate off these last two chapters of Season Four off as another ‘volume’ and show them as two feature-length entries is interesting. There are definitely times when the story feels elongated and a bit indulgent and there’s a solid argument it could have been shorter… yet the finale, though long, doesn’t actually feel like its two and a half hour length. The ideal situation would probably have been to keep all the material but broadcast it differently: something in the middle, perhaps three episodes with only slightly extended times.  The climax works well enough in spectacle, but we’ve already had the best Kate Bush-embracing finest fist-pumping ‘Yes!‘ moment of the run delivered weeks ago as Max escaped Vecna’s clutches and despite amping up the fire-power for the finale it doesn’t deliver the same, perfect emotional wallop. The main action also finishes a good fifteen minutes before the end of the chapter with an epilogue which sees the various surviving characters all brought back together. Huzzah! Yet, a little like The Lord of the Rings, you can feel the slight shuffling in the seats of even the most satisfied, glad to see everyone hugging again and wondering why we’re still hanging around for multiple epilogues despite the ensemble’s appeal. You can hear that clock still ticking and you wonder whether this extension means a bad thing  is about to be reversed or a good thing undone. But nothing of note really transpires apart from foreboding dark clouds and in the end we seem to glide past the volume-ending full-stop into a ‘…’ which both promises more and some unspecified time and feels like a strange unsatisfying edit.

The question is: Where do we go from here? There seems to be an immediate, incoming danger in the dying minutes of ‘The Piggyback’ with the real Hawkins in flames, a disaster area from which people are fleeing or hunkering down. And yet the Duffer Brothers (Matt and Ross, who created the show and wrote/directed this most recent entry) have already noted that the production schedule may mean a necessary time-jump in the narrative to accommodate how quickly its cast is growing up. In that regard, CGI and good wardrobe and make-up departments have done their best in this run and are to be applauded for their success, but there’s only so much magic they can weave when some of the young cast will be well into their twenties playing characters still in their teens. Suspension of supernatural belief is one thing, but this isn’t Grease.

I’m not one for random death and stunt demises for the sale of it, but the series also plays it a bit safer than you’d expect on the collateral damage front, though Hawkins  real estate just went through the floor. The death of Joseph Quinn’s Eddie Munson was somewhat inevitable, going out like the hero he always wanted to be (yet without the gratitude of the town that scorned him) while the body-breaking of Sadie Sink’s Max earned a ‘Nooooo!‘ from this couch.. yet only one of those demises truly sticks (Max, somehow, is now just in a coma). If you’ve followed the show through all its seasons, almost all the mainstays are safe.  Like the Harry Potter franchise, the Stranger Things timeline has grown steadily darker with each entry, just as its audience has aged alongside it, but the Potter journey and the Hogwarts climax had plenty of casualties. One wonders if the Duffer Brothers will care about preserving their fan-favourite ensemble more than that delivering the bittersweet, achingly tragic but powerful arc that real quests demand to truly soar. Despite internet campaigns against it, might there have been a justifiable creative case for killing off some major characters ‘for real’ to genuinely raise the stakes ahead of next season’s swansong?

Stranger Things is still superior television, not just for Netflix (which it momentarily crashed when these final episodes debuted) but for the entire medium. Despite all those recognisable influences there’s nothing quite like it on television and it deserves its cult status. But the fifth and final season now has a lot to prove if it’s not going to feel extended beyond its already long life-span. But given the successes of this run, we’ll all be there to see it off in style – whenever it finally gets here. 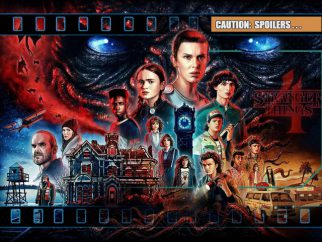