A sense of a streamlined reboot, but there's literal 'bugs' in the system as the enigmatic 'Westworld' returns...

It’s years after the riots that tore apart parts of the cities, the realisation that a super-computer was attempting to control the everyday lives of its citizens… and in many ways things have gone back to normal. People may still be disillusioned, but now they feel their futures (and pasts) are down to them not some rogue AI. However the man called Caleb sleeps with one eye open, always feeling that danger is near and the other show may drop. Maeve stays deep in the woods, still searching for something with meaning but keeping humanity at bay. And in the heart of a city, ‘Christine’ lives an unfulfilled life trying to pen the sort of romance tales that the world no longer seems to want.

But in the shadows, forces are watching, circling. Some are there to protect others to kill and soon everyone will find themselves back in a maze of lies and agendas they thought they had escaped…

If you were to be asked about the most ambitious show on television, there’s a fairly decent chance that Westworld would feature high on the list. Simply put, there are few shows with the budget, vision and talent combined to match the HBO juggernaut that was inspired by the  Michael Crichton book and film but which has gone on to be something far more far-reaching.

But while clever, it hasn’t been without challenges. Having the concept of artificial life running amok – or, more accurately, evolving – and taking it for a walk outside the ‘park’, means fewer boundaries. The narrative pendulum swung wildly between exciting set-pieces and what felt like annotated university lectures on humanities – being profound but also profoundly confusing in the moment. The complex sleights-of-hand in the narrative, the timey-whimey bending of continuity to drip-feed revelations, the actors-as-multiple-characters and epic societal consequences are sometimes hard to keep straight – and often not helped by the massive gap between seasons. Anyone who didn’t play catch-up  by binge-watching the last run before the new series launched on HBO Max this week was likely to flipping through their mental database/rolodex to remember exactly how we left things back in the chaotic days of 2020.

The series has long since gone beyond park-building into world building. The excellent production values remain in the season four opener The Auguries, the scenery and foreground littered with tweaked fashion, advanced marketing and believable just-in-the-future-but-not-ridiculous tech. The good news is that while still ambitious in all those departments, the new season feels more like an entry point for new viewers who may have previously been off-put by the terminal-sized baggage the show has developed. Oh, there’s references to past deeds (the super-computer guiding people’s lives, the subsequent riots etc) but it’s as years-removed backdrop. There’s still a raft of new questions and complex relationships of which we are just scratching the surface – and which will likely itch throughout – but while it helps to know who some of these characters are (or may have been in their backstories to date), the decision to have them living new lives long after the events of the previous run means that we’re discovering new truths and filling in those gaps  alongside them rather than being dragged behind as willing but bewildered acolytes to the cause.

Rachel Evan Wood’s Dolores was at the heart of the previous runs, one of the park’s robots who became self-aware and who’s retribution on those who abused her was contoured and far-reaching. Dolores appeared to sacrifice herself at the end of the third run, so it’s not immediately clear the connection to ‘Christine’ the new character that Wood is playing here. Christine writes holo-novels and fills out some of the details on the supporting player narratives in a gaming corporation, Olympiad Entertainment. Christine looks at the gloomy world (is it the ‘real’ world or not – time will tell) and would rather write romance than action, steering to fictional hope rather than real despair, but her publisher demands more of the latter categories if she’s to keep her job. Outside work she’s not exactly a social butterfly either, but it seems she’s been stalked by a man who wants  her to rewrite his ending, though she has no idea what he means.  Wood was excellent giving us the many layers of ‘Dolores’ but ‘Christine’ feels like a new direction, hardly a blank slate but one in which the details will be different rather than one twisted connective thread that ended up in knots.

Aaron Paul (Breaking Bad) was a welcome human addition to the third season and here in the fourth ‘Caleb’ is far more centre-stage – a PTSD ex-soldier who knows more about the real reason for the riots and the AI’s role in them that he wants to and now living under the radar with a wife and child. He still flinches at unexpected noises, keeps a gun near the bed and teaches his daughter target-practise but he’s trying so hard to bury the memories and to prove he’s moved on.  The same is  true, to some extent, for Maeve (Thandiwe Newton) who makes her home in a remote woodland cabin, only venturing in to town for supplies. That doesn’t stop wetwork squads coming to challenge them both.  Maeve makes light-work of the team sent to find her and uses her own tech to back trace the puppet-master who is desperate to track her down: William (Ed Harris) and is able to come to Caleb’s aid just in time. Yes, William – the Man in Black and a business-man counterpart to the original film’s gunslinger played by Yul Brynner – is still around, or at least an AI counterpart… again, don’t ask me to recount the character’s backstory as my CPU is already overheating.

Those who loved the science-fiction nuances and the frenetic changes of direction with deep commentary on the nature of story-telling and the human condition may momentarily wonder if the show has put on the brakes. But given the show’s history and production it would be naive to think that Chrstine’s story will turn this all into some kind of  Sex and AI and the City and it’s unlikely that  showrunners Jonathan Nolan and Lisa Joy have diluted or dumbed-down the concept except to make to make it’s high-brow issues a tad less arch and make the viewer feel a little less stupid as they try to figure things out.  There’s a lot of  questions raised in this new entry,  no least the creepy nano-bot sized swarms of insects that look to be the latest evolution in ‘reprogramming’ those they encounter, but the mysteries feel – for the moment – potentially solvable as things progress. It could be that in a few weeks time we’re back to tearing our hair out and having our own memory-cores dumped – and yes, you’ll find yourself  continuing to scrutinise the sweeping crane and camera pan sequences for little clues and references you’ll recognise – but for the moment, we’re entering a fresh new maze and one where the twists and turns seem just a little less insurmountable. 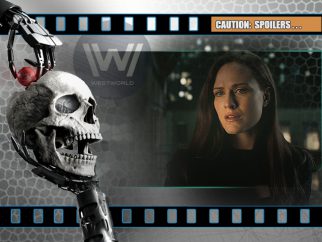