In the midst of celebrating various cadets completion of their service, the Enterprise faces two new missions – to deliver much needed supplies to a far-off outpost and also investigate the loss of contact with the Peregrine. Pike decides to send the main Enterprise and its crew onwards on the medical mission while he selects various heads of departments and cadets to accompany him down to the surface of Valeo Beta V to search for the Peregrine and any survivors. Complicating the mission, the ion storms in the atmosphere will interfere with communications.

Upon arriving on the surface, it’s clear that the Peregrine faced something sinister and deadly. There are dead bodies  scattered: some torn apart, some victims of the incredible cold. The away team manage to find readings of two survivors and an ominous final warning from the ship’s captain.

Ill-prepared for what they are about to face, Pike and his team attempt to uncover the truth and survive the night – but not everyone will make it out alive…

If last week’s episode felt like a budget-saving bottle show with most of the seams showing, then a week later we get an example of another bottle-show (again mostly redressing familiar sets – though now bolstered by some nice scene-setting exteriors and good use of shadows) but one that couldn’t be more different in tone and execution. In a case of tragedy tomorrow, comedy tonight, The Elysium Kingdom was little more than silly, disposable filler but All Those Who Wander is essential – largely because it puts everyone in genuine peril.

It’s totally possible to pick the episode apart, dissecting the myriad string of homage’d moments being lovingly knitted together and a contrived but useful reason to separate the crew. (The Enterprise itself going off on a medical mission with Pike, Spock, La’an, Chapel, M’Benga, Uhura, Hemmer, Sam Kirk and assorted cadets staying behind on the rescue/salvage mission for the Peregrine would seem to be the reverse of what would logically be a divide-and-conquer separation of missions). But once established, the visual influences are unapologetically worn on icy-touched regulation uniforms sleeves: the frigid  environment and the hidden dangers inside humans are from The Thing, the thermal vision is pure Predator and the gestating Gorn, the sole young female survivor and the wreckage of The Perergine, resting like some derelict pointer to the stars, bring back obviously-intended memories of LV-426 and are clearly all nods to Alien/s.

It’s admirable that the series is taking one of The Original Series‘ most-derided villains the Gorn and making them a viable, savage threat, though it sometimes feels as if the production hasn’t quite got a handle on what specific kind of threat they want them to be beyond that fatalistic description. On one hand we know that they are this ruthless, space-faring race with powerful starships and a conquering attitude that would give Klingons a run for their bat’leth, on the other there’s this  reptilian, animalistic nature we see here from birth that is more akin to primal, hungry velociraptors. Their design is less spectacular than simply an amalgamation of every shredder-like species sf has encountered to date, but  I can see these Little Gorns as immediately intelligent flesh-tearing, egg incubating xenomorph-copyright-infringing hunting machines… yet less so as a starship crew and not just because of the T-Rexian arm problem. There’s a danger that in the rush to make them formidable, Strange New Worlds is making its nemesis all-encompassing-enough to just be unlikely enough to join those dots.

The episode works because it also finds time to work with various character dynamics. Uhura ( Celia Rose Gooding) and her decisions are the framing book-ends to the story, Hemmer (Bruce Horak) offers sage and fateful words of advice about decision-making and Spock (Ethan Peck) struggles with his human side with Nurse Chapel (Jess Bush) once again there to soothe his brow. There’s plenty of requisite foreboding ahead of some of the more action-filled moments. Yes, common-sense tells us that we know some of the characters are safe given the franchise’s mythology, but there’s a larger degree of decimation around them. Any ceremony in which a group of people toast their successes and survival to-date and then get involved in a dangerous mission puts up a whole range of obvious fatalistic red-flags and red-shirts. In such a homage to the genre, it would have been nice to see a zag instead of a zig and at least Chia (Jessica Danecker as dead cadet walking!) and/or the newly promoted Lt Duke (Ted Kellogg, equally doomed!) actually survive the mission, but as formula demands, they are the first if not last to go. But the loss of Hemmer hurts. Of all the new crew, the brusque Chief Engineer was the one that made the most impact. At the episode end, like Kurt Russell at the end of The Thing, we see a solitary figure contemplating his own fate until the moment he falls… he’s not happy with his demise but is content with a good life and embracing the need for sacrifice – and being the reason that Uhura (up until then getting ready to depart) will now stick around for the journeys to follow. It may save on the prosthetics budget, but having an alien-looking character gave the show and ship a real feel of galactic inclusivity and having a visually-impaired actor playing a visually-impaired character in such a high profile role is somewhat lessened by his departure.

With the unexpected death of Hemmer and the subsequent departure of La’an (off to help Newt…. sorry…. Emma Ho’s Oriana find her home) there’s significant loss involved to the status quo in this episode, one that makes it feel far more like a season ender than a penultimate chapter – and which makes one wonder what the finale has in store ahead of the already announced second run? Though Hemmer’s demise is final, Horak has hinted in interviews that this episode may not be the last time he’s involved with Trek and Christine Chung La’an will undoubtedly return (the series isn’t going to give her the Noonien-Singh surname and then waste it) but changes are clearly on the way.

This first season of Strange New Worlds has been about the latest addition to the franchise flexing its muscles, trying old and familiar things, but often in new ways and in almost every case has succeeded in making us care. It’s arguably the best Trek in some time. 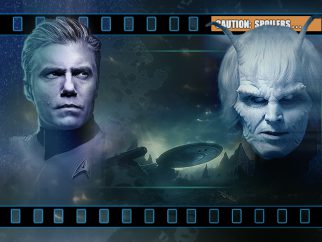