Evil is a show that’s always been good at surprises. What could very easily have been just a very safe ecumenical X-Files has consistently been anything but. The show, created by Robert and Michelle King  and originally a CBS series in the US (and then part of the network’s shift to an online presence with Paramount+)   and Alibi in the UK  (where the third season doesn’t have an airdate as yet) proved edgy and clever from the start and only got more so when it was able to shift to streaming and shake off some of its restrictive shackles.  That’s partly the reason there’s quite a bit more… well, let’s be honest….fucking in the show recently, both in the language used and the carnal variety. The fleshy part isn’t so much explicit as…let’s say enthusiastic with disciplined editing making such scenes neither prurient nor explicit but certainly intense. The language quotient certainly isn’t suitable for church, but it’s also not used merely to titilate and shock – often used in a way that you might hear someone genuinely react to the shocks, scares and frustrations the series can highlight.

Evil has also walked the line between its more serious aspects and its sly, often cutting humour, treating the absurd as both frightening and quirky. Asif Mandvi – as Ben – is the guy with the most comedic credentials (having been part of Jon Stewart’s The Daily Show and the host of the US version of Would I Lie to You?) but his strength is very much as the straight guy here. Ben is the scientific wing of the team and technical expert who will look for the obvious sleights of hand in possible explanations and more than capable of offering a well-timed acerbic zinger to lighten the mood. He’s somewhat conflicted by the traditional Muslim faith of his family – though he’s not practising but also being aware that some things he encounters defy real explanation. That’s a scale he actively explores with the help of his sister Karima in Season Three.

But the trick here is that each of the characters is having their viewpoint challenged.  Mike Colter’s David is newly ordained but feels an emotional and physical pull towards  professional sceptic Kristen (Katja Herbers) and a resistance to the politicking and posturing of the church that seems more interested in maintaining a status quo than achieving a mirabile visu. He’s a good man trying to avoid doing bad things and in an environment where ‘bad’ is certainly fluid and subject to viewpoint. Kristen has become more open to wider explanations that don’t always conform to her own beliefs and certainly developed a wild side last time around but appears to have had that literal demon exorcised – or has she? She’s still struggling with that attraction to David while genuinely trying to save her marriage (to Patrick Brammall as mountaineering Andy) while working out what’s real and what’s not.  A driven mother, she’s also got a maternal strength that’s more than up to the job. Things are less subtle but certainly more bizarre with Leland (the ever-wonderful Michael Emerson who has made a career out of playing outwardly awkward but manipulative characters) and Kristen’s mother Sheryl (Christine Lahti) who are allowed to indulge in the more overt wickedness. Many shows falter when they feel pushed to pivot in one direction or another and staying on the fence is tricky when your audience often wants easy answers and clarity – but Evil has resisted the temptation for trite explanations. There’s certainly something supernatural involved in the mix but more often than not the nature of the ‘evil’ at work can be just as man-made as any ethereal explanation.

(Unfortunately I wasn’t able to immediately watch the return of Evil when it arrived back on US screens in early June, but below is a belated catch-up of the first three episodes aired so far)

The Season Three opener, The Demon of Death , blends all the elements together as  David and Kristen (who either engaged in a lustful union or didn’t but either way are trying to ignore their recent sweaty lip-locking) and Ben assist in a scientific experiment that is attempting to assess the possible weight of a soul. Once again taking its cue from real-life scientific studies (and the possibility that a human body somehow weighs less immediately after death than it did moments before), a dying priest – played by The Princess Bride/Young Sheldon‘s Wallace Shawn) volunteers to be monitored at his time of passing. However things don’t go quite to plan as he seems miraculously cured, though a follow-up patient suffers quite the reverse.  Rather than trying to explain the events in a dead cold scientific way, the opener looks at the reactions to the events, musing on the very implications of what is lost or gained. All the while they have to contend with Leland’s interference but he too is consistently thwarted by the efforts of Kristen’s children (Brooklyn Shuck, Skylar Gray, Maddy Crocco, and Dalya Knapp – all delightful) who have grown wise to his efforts to corrupt them via a gaming app to get to their mother.

The second episode, The Demon of Memes, takes a look at a Slenderman-type situation where a internet phenomena demands a list of tasks from its users to ward off an entity that will kill them and their families if they fail to do so. How can a blurred demonic face be appearing on a Google-Maps-type navigating system, glaring out from places where murders have occurred? It’s a prime example of all the trio’s abilities coming into play as Ben uses tech-tracking to unearth coincidences that could well have been orchestrated rather than organic.  The show continues its wry observations on just how much the internet and electronic media has enabled urban myths and power-structures to take hold and influence… but it’s Leland who gleefully notes that you don’t have to orchestrate evil deeds, merely be able to disseminate them at speed.

The third episode, The Demon of Sex (and yes, you’re spotting a pattern here) is more a quirky character-study of various characters. Sister Andrea (Andrea Martin) is back and that’s always its own reward, the no-nonsense character rapidly becoming a fan favourite as the polar opposite of Leland and usually more than able to take him on at his own games. Here the sister is the only one who sees a literal demon trying to influence a young couple that are having some problems consumating their marriage. Kristen is offering them practical advice that ahs little to do with their religious faith and Sister Andrea sees the demon getting stronger. So begins a careful dance where both Kristen and Andrea must bring their abilities to the front and complement each other rather than oppose. Given that Leland is once again trying to undermine them, it’s great that they both realise the danger they could be in and decide to support each other rather than be used by others.  Ben also continues to examine his frustrations and it’s Karima (Sohina Sidhu) that drags him out of his funk and simultaneously opens his avenues to wider insights (possibly even giving the show back-up characters akin to The Lone Gunmen). Christine Lahti also gets some great lines when she’s put in charge of an initiative involving a corrupt cryptocurrency and shows just how far she’s willing to go to bridge the Boomer/Millennial divide.

The only quibble with the series continues to be that there are so many interesting and infernal wheels in motion that sometimes elements that seem highly important get dropped to accommodate others in the moment – you’re never sure (even scene to scene) where the episode is going to take you. So longer arcs such as the embryonic conspiracy that’s been in play since the start have largely faded into the background for the moment.

Still, Evil continues to be smart, sassy and a thinking person’s guilty pleasure and long may its temptations and revelations continue… 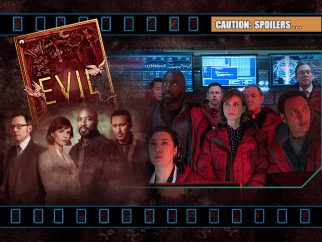