The cast have fun, but the fairy-story is thin in a bottle show without a genius genie...

While Doctor M’Benga (Babs Olusanmokun) continues to fret over finding an answer to saving his daughter, he reads her favourite fairytale book as a way to distract her from her existence inside a transporter buffer. But when the Enterprise suddenly seems to chnage around him, he fidns himself echoing the situations found in its pages –  his fellow crew-mates reflecting the characters and archetypes from the story.

What has caused this sudden change? Is it real? Is it all in M’Benga’s head? The doctor works his way through a storybook quest across the starship and realises that the key may lie as much in his own child as it does in whatever lurks outside in space…

Wider opinions will likely vary – after all genre-fandom has rarely managed to agree on anything – but this was the first of Strange New Worlds‘ that I actively didn’t like. I didn’t hate it or loathe it feel inclined to pour vitriol on it, but it’s simply the first time the various tones seemed to collide rather than blend, the first time that echoing the tone of The Original Series (while bringing in a modern sensibility) just didn’t quite work for me and I found myself glancing at my watch wondering how much of its running-time was left.

‘Reality-warping’ episodes are hardly rare. They’re a popular way of using your ensemble in different ways, creative catnip for writers and actors to get the chance to flip the narrative and play against type. Good guys can be bad guys, bad guys can be good guys and consequences can be limited as things are usually returned to normal by the closing credits. All of Trek‘s incarnations have felt the tractor beam of such a twist and with the Mirror Universe, it almost became regular punctuation.

Pitched as a warp-drive whimsy, The Elysium Kingdom‘s purposely over-the-top production tries to capture the tonal magic of The Princess Bride, also taking a few affectionate shots at the likes of The Lord of the Rings and the Narnia books – any fantastical story in which a morality tale plays out in the ways of magical derring-do (and dont’s). But the effect, with minimal faux vines spread sparingly across hallways and costumes that look like they’ve been pilfered from the wardrobe department’s bargain-basement rack makes it feel less like a timeless classic and more like a amateur-dramatic society’s Christmas pantomime.  The show has no lack of budget, so the artificiality of its all was obviously a production design choice, but what might have worked well enough in short sequences or played out in widescreen blockbusting CGI, instead falls into the middle-ground and grows distractingly bland in execution when stretched thinly throughout the episode.

It’s clear the cos-playing cast are having fun. Anson Mount, robbed of his command chair and Johnny Bravo hair is transformed into a fawning and cowardly advisor and still demonstrates perfect comic timing, eating the scenery with extra relish at every opportunity. Ethan Peck channels his inner Legolas and Celia Rose Gooding makes Uhura icily evil. Christina Chong becomes a spoilt princess with puppy accessory (trivia: it’s actuallt Chong’s own pooch!) and Melissa Navia as Ortegas is eternally ready for action and Bruce Horak as Hemmer (the only other crew-member unaffected by the transformation) invokes the hand-wavering prestige of the ‘magic’ he has to perform and one can bet that when the inevitable blooper reel surfaces, plenty of scenes will have come from people corpsing in earlier takes.

The abject silliness is fun and could easily be forgiven if it wasn’t such at odds with the end of the episode,  a hand-brake curtailing one of the show’s more interesting sub-plots.  M’Benga’s terminally ill-daughter Rukiya (Sage Arrindell), whom he is keeping in the transporter buffer until he can find a cure, had the potential to produce some interesting moral and practical dilemmas along the way. Here we’re presented with a sudden and unlikely resolution that sees her suddenly and conveniently cured but inconveniently whisked away to join a lonely alien entity, the ethereal being that latched on to her storybook imagination and changed the ship to make her happier. She appears again, as an older Rukiya (I’m not quite sure how a bodiless entity ages in such a way) thanking her father for letting her go and it all brings echoes of Pearl Mackie’s goodbye to Capaldi’s Doctor, though less earned or powerful here. For one second it seemed like this might be the lazy aging-up of a character to make the new incarnation a regular (a tropey staple often found in comics), but instead it’s a firm exit strategy It’s also a deux ex machina development with only the most abstract explanation. Instead of an emotional finale to the story, this all feels more like an abrupt decision to finish this story-arc and the momentary heart-tugging feels oddly juxtaposed to the anarchy that’s reigned up until that point. The only good thing is that so far M’Benga has largely been defined by his dilemma and know we’ll get more stories that feature on him as a person.

A disposable episode, then… not one without its merits but in all but its resolution, just a distraction and one that doesn’t build on any of the Sybok revelations from the previous outing. 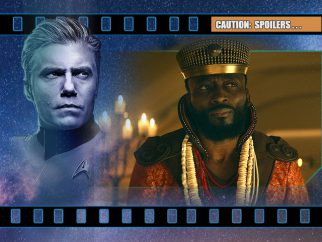