Kenobi and Vader face off as Reva decides to get her revenge on Vader through the infant Luke...

After escaping Vader’s clutches, Kenobi and the rebel survivors are still being pursued by a Star Destroyer across space and it seems they are out-gunned and out of time. Knowing that Vader’s main aim is to capture his former master  one final time, Kenobi realises he has to entrust Leia’s safety to the rebels and head out on his own, hoping Vader will follow him and not the others.

On an ancient rocky planet, Kenobi and Vader get ready for what both suspect will be their final confrontation.

But far, far away on Tatooine, Reva’s journey leads her ever closer to the Owen and Beru Lars homestead where a young Luke Skywalker lives. Will Reva enact a final and devastating revenge on Vader by killing his secret son?

Last week’s penultimate chapter suggested we were heading towards some major confrontations in Obi Wan Kenobi‘s finale and in many ways, it delivers. Not perfectly and not without quibbles, but it’s arguably the most ‘Star Wars’ most of the modern productions have managed. The likes of The Mandalorian and The Book of Bobba Fett have played in the same universe and scattered easter eggs hither and yon, but Kenobi and some of the assorted players at work here make this the most essential additions to the modern-arm of the mythology so far.

It may be blasphemy to say it, but while Darth Vader is a truly iconic cinematic villain, I’ve always found the Lord of the Sith something of a one-note bad-guy, the epitome of an easy version of evil personified: cloak-swishing, dark helmeted, throat-rasping and striding around exactly like the Saturday morning antagonist from which George Lucas drew inspiration. It’s Anakin Skywalker that’s far more interesting, the person who was slowly corrupted, first by good intentions and then personal interest. Despite them being the same person, the two personas have always felt separated and distinct, but with his helmet split and respirator damaged, the episode finally delivers that connective tissue – Hayden Christensen’s face glaring from under the helmet and a mixture of his and James Earl Jones’ voices blending into a vocal performance that also merges wounded animal and cybernetic hatred. It’s a book-ending, new volume-starting moment.

With Kenobi finally able to channel his full Force abilities, the series cranks up the possible visuals of that. The Kenobi/Vader battle was good in and of itself – again the darkness and rugged environment sometimes adding to the atmosphere of it, sometimes taking it away – but I still think it would have been more climactic if we hadn’t had the skirmish earlier  – there’s only so many times that you can have those two face each other and leave it unresolved without diluting it. Vader/Anakin not fully checking on Kenobi’s demise (granted, dropping a mountain on someone is usually a done deal but….) is another of those series mis-steps in which the plot is extended by actions that don’t make a lot of sense. Equally, Kenobi not killing Vader when he’s now convinced all traces of Anakin are gone and has the opportunity to do so, doesn’t seem to be about logic or mercy. He knows Vader’s darkness and threat-level and that people will die if he lets him live, so a duel to the death in fair combat doesn’t seem like an ignoble end. However, we knew that continuity and mythology must abide so all of these pre A New Hope confrontations are a little hobbled by what they must / must not deliver.

For a show where the survival of almost every known character was ensured by their earlier (if chronologically-later) appearances in the franchise, the tension is cranked up as well as it could. There’s really no reason Owen (an under-used Joel Edgerton) and Beru (Bonnie Piesse, making the most of her scenes) should survive Reva’s full-on attack (despite her being hurt, she should have been able to handle the couple  easily) but that can’t happen given their fate is ordained further down the road.

Reva’s journey is an interesting one. I’m still not quite convinced that the character, played by Moses Ingram, that we saw at the start of the season was merely biding her time so she could take down Vader and her animosity to Kenobi seems to vacillate throughout the run. Initially one could say that bringing Kenobi to Vader would seal the deal on him believing her to be loyal to the Sith Lord and create an opportunity to bring Vader down, but she doesn’t seem that conflicted about delivering a Jedi to him as part of a plan to make him pay for killing the Jedis in training. Kenobi also left her to face Vader when he escaped, at least suspecting she wouldn’t be able to beat Vader, which can hardly have endeared him to her. However internal conflict is often as interesting as the VFX-variety and it’s perhaps a savvy move to create a new and somewhat ambiguous character and  keep her alive for to-be-decided-later future use (and likely have marketing opportunities). As for the bigots who wrote off the character merely based on her skin-colour, there’s a Sarlacc Pit with their name on it.

It’s interesting that Luke got side-lined instead of Vivien Lyra Blair’s Leia. Even though we see more of the young Luke in this final chapter than in the entire series so far, Grant Feely’s version has very little to do but run and hide. Though Mark Hammill’s Luke would be the centre-point for the Star Wars saga, this season certainly paints Leia as the more dynamic of the siblings. One wonders whether, if there is a second season, the show will be able to resist returning to her and manufacturing another Baby Yoda/Grogu-esque reason to keep a fan-favourite around even if it doesn’t make a huge amount of narrative sense.

The series has suffered a little in its pacing, forestalling events by repeating a run-hide-fight cycle. Here, one does have to wonder about time, space and distance factors, where, after episodes-worth of travelling across the void, Kenobi somehow detects that Luke may be in danger  from light-years away and yet manages to make it back to Tatooine to play a part in the end of Reva’s attack on the (faithfully-recreated) desert homestead. It does make it unlikely that he couldn’t simply have travelled faster and more directly route to safety in the first place. In what amounts to an epilogue he also journeys all the way to Alderaan to say ‘Hi!‘ to the Organa family, exchange a few platitudes and then leave again after a few minutes conversation. The remaining Jedis must be burning off those frequent-flyer miles.

The VFX are of the standard you’d now expect from Lucasfilm and their Stagecraft platform. The opening scene with the transport being chased by a Star Destroyer copies/homages a similar sequence in the original films and the world-building continues. Props appear even more resilient. Yet again, Kenobi conveniently finds his light-saber after it was momentarily lost in combat and – just a little later, back on Mustafur – the injured Vader appears fully restored to his imposing self as he talks with Ian McDiarmid’s Emperor… I guess he has a secret wardrobe of spare Sith armour.

The appearance of Liam Neeson as Kenobi’s own mentor Qui-Gon Jinn in the last scene was always a rumoured possibility – a distant vision of him might have sufficed but we do get the whole ‘I’ve always been here, you just weren’t ready to see me…‘ speech which seems to marry with the idea of the Jedi being an ancient religion as much as an order of warrior monks. Again, if there is a second run, will Neeson make an ethereal but less cameo-like return?

All in all, despite pacing mis-steps and some missed opportunities, Obi-wan Kenobi has been a success, nostalgia-powered but filling in a piece of Star Wars history with solid performances (especially from McGregor’s world-weary lynchpin and Blair’s resilient L’il Leia) and there’ll be few existing fans who don’t feel the journey was worth it. 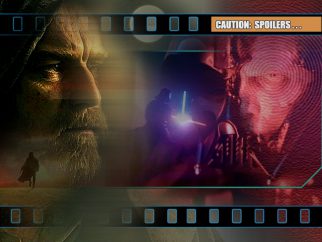