Pete ‘Maverick’ Mitchell is a pilot with a reputation for pushing boundaries to the limit – on a personal and professional level. Undeniably one of the Air Force’s all-time ‘Top Gun’ talents, he’s never had any interest in serious promotion as long as he can continue to fly, but his lack of adherence to the rulebook and protocol has meant that many would be happy to see him gone. For twenty-five years, he’s managed to survive those opposing forces.

Unexpectedly recalled away from overseeing the latest stealth project, he receives instructions not to fly but to teach the latest top-tier flyers ahead of a seemingly imposible mission. The team will have to fly deep into enemy territory, hit a small nuclear bunker and escape before they are blown out of the sky by the heavily-armoured defences on the cliff-faces around their target. And ‘Maverick’ has a matter of weeks to get them ready.

Already doubting he can pass on his instinctive skills, the situation is made more complicated when it turns out one of the mission pilots is the son of his old friend ‘Goose’. ‘Rooster’ is a young man who blames Maverick for the death of his father and for standing in the way of his own desire to follow him.

Can Maverick find a way to both teach and protect the team… if he’s not grounded first?

Top Gun is a thing of legend – a cinematic and cultural milestone that simultaneously set boundaries for tentpole cinema, firmed up a bonafide, platinum A-List status for Tom Cruise and acted as a recruitment poster for the US Air Force. It was also, Quentin Tarantino suggested, the most homo-erotic movie of all time, showing men competing against each other, for each other and revelling in testosterone bravado in a way that might make the Spartans weep. Men were real men, planes were real planes and women were really good decoration.

Given the monumental success and a raft of inferior imitations that followed, there was long talk of  an official sequel, but numerous factors always off-set the possibilities. Schedules, story and the death of the original film’s auteur Tony Scott all played their part. Cruise himself had gone on to other things and didn’t seem particularly motivated to revisit Maverick and – after three decades – it was generally considered that the film ‘of its time’ had simply had its time and a follow-up was unlikely or ill-advised.

Yet Hollywood is rarely an industry to take its own advice where both potential profit and ever-popular nostalgia are concerned and so, here we are, looking both forward and backward as take to the skies once more. Over twenty years later (add a handful more because of the COVID delays) and that sequel has finally been made and got a cinematic debut. Joseph Kosninski (whose past directing duties include, Only the Brave, Oblivion (also with Cruise), Tron: Legacy and a handful of music videos) handles the kinetic tasks well enough, though the instructions are more to emulate Scott’s original in every way possible than deviate from the pre-set the flight-path.

Top Gun: Maverick has the all the sleek on-screen and technological majesty that money can by, all the ingredients needed for blockbusting success… and yet all the depth of a paper-plane.  This is Cruise control as auto-pilot – every pun intended. It neither stretches his talents nor offers us anything particularly memorable, but it undeniably plays to his strengths and entertains on a basic, primal level and with an assured tone that obligingly offers set-pieces and showcases its cast. Utterly captivating, utterly disposable and feeling a need for no measurement other than speed.

It is, of course, Cruise’s movie, as always. The supporting cast know why they’re there, even when the script gives them nothing but idle banter. Ed Harris grizzles and John Hamm grumble, Jennifer Connelly is a glass of whiskey made flesh and Miles Teller and his fellow ‘Top Guns’ trade insults and flight skills.

Cruise, a major force in front of the screen and behind, doesn’t miss a beat – giving us a Pete ‘Maverick’ Mitchell who is older, a little bit wiser but still, recognisably, the same guy who flashed his perfect smile and middle-finger to authority. His character systematically disobeys orders, ‘steals’ test-planes and flies at supersonic speeds to avoid budget-cuts and casually quips at grizzled commanders such as Ed Harris and Jon Hamm, who’d rather he be grounded. Logically, Mitchell/Maverick should have been promoted time and time again for his achievements or, alternatively, drummed out of the service for his reckless disregard for the rule-book…  but, dammit, he’s a maverick and mavericks gotta do what mavericks gotta do, man. With the protective oversight of Tom ‘Iceman’ Kazansky  (Val Kilmer) – who has acheived a position of power as a respected Admiral and Commader of the Pacific Fleet – and the innate desire to be in the cockpit not an office – Maverick has never risen above the position of Captain. He has regrets, but none of them are related to the lack of forward-advancement of rank. Montages come and go as he gazes at pictures of ‘Goose’ (Anthony Edwards’ doomed team-mate in the original) and recalls his personal, internal promise to look after Goose’s son Bradley after the off-screen death of the kid’s mother (Meg Ryan) and thwarted by the fact the kid wants nothing to do with Maverick after Goose’s death and later resents Maverick for blocking his upwardly-mobile career because he felt he wasn’t ready. The rebel has become the mentor on a purely technical level, but still speeds along on the fastest equipment money can buy – be it the planes in the air or motorcyles on the highway to the danger zone, helmet optional.

There’s no sign or mention of the original film’s Kelly McGillis, an actor who subsequently distanced herself from the picture-perfect iconography that Hollywood demands. She wasn’t approached to appear and equally didn’t seem surprised or bothered by the decision. But such a film contractually needs a love-interest with whom Maverick can flirt – beautiful enough to make you miss a beat but required to do very little than simply be there and occasionally look on disapprovingly with melancholy and lust. Jennifer Connelly, most recently seen in Snowpiercer, is a beautiful, talented actor who has been around since Labyrinth, but now in her late forties, she’s still  consistently proving how good she is. As Snowpiercer‘s Melanie, Connelly gave us a steely, driven and often ruthless character, but her role as Maverick‘s Penny Benjamin is the opposite: playful, teasing and a happy-hour rebel in her own right. Like all Hollywood single-mother creations she’s sassy and stylish: she has time to raise a well-adjusted and understanding child, own and run a bar, go sailing on her yacht and still look like she’s stepped out of a shampoo commercial. It’s all ridiculously glossy and superficial, but given that Connelly positively burns up the screen merely by breathing and refreshes like a glass of whiskey made flesh, you are instantly inclined to forgive the film for wasting her other talents.

Val Kilmer has suffered from the fallout of throat cancer for many years and his absence from the production would have been understood. But in one of the film’s most powerful, if arguably manipulative moments, he reprises the role as Iceman/Kazansky, a veteran now entering the last days of his own life. It’s clearly a powerful moment for characters and actors who share a particular bond and their final meeting gives the film one of it’s more powerful, non high-octane moments.

The Top Gunners collected to fly the mission at the heart of the story are a fine crew of cookie-cutter high-achievers each fulfilling a singular character-trait. Miles Tiller’s  Brad/Rooster is every inch his screen-father’s son, but brimming with resentment while learning important life-lessons. You’d be hard-pushed to name any of his fellow pilots, but the likes of Glen Powell, Jay Ellis, Lewis Pullman and Monica Barbaro are all fine in their performances. A beach scene in which the crew play volleyball – a team-building exercise according to Maverick – and in which bronzed, toned bodies glisten in the sun while chugging beer, probably adds weight to Tarantino’s take. (The most interesting aspect is the original film’s similar sequence almost got Scott fired for wasting the budget and yet it was a requisite and multiple-reshot sequence for this outing).

Cruise and Kosinski keep us on the edge of our seats during the climactic mission (which feels like a sandy variation of a Death Star run), the disorientating momentum and editing recreating the stress and chaos that real, if less-photogenic, pilots likely feel during battle and on a technical level it’s undeniably amazing. Say what you want about the lack of actual plot, but the film can’t be beaten on the way it executes its action.

It’s easy to see why Top Gun: Maverick has instantly made a splash (or sonic boom) with its opening box-office tally. Anyone old enough to have seen the original on its debut will have a natural curiosity in seeing how the new film measures up. Cruise may have controversies in his career and life, but he continues to be not just cinematic catnip but a creative force in everything he does. His Cruise control hums and glides like the planes he flies, the stunts he personally undertakes consitstently impress and the executive producer role is one he takes incredibly seriously. Say what you want, but his work ethic and lazer-point commitment to everything he does is unsurpassed and continues here.

With mainlined attitude and altitude, Maverick: Top Gun efficiently does everything you expect… and absolutely nothing else. If you liked the original, there’s every chance you’ll love this, even if you hate yourself a little for not demanding anything more… 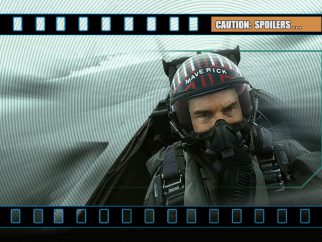