It's all about radical empathy, irony and infamy as the off-duty Enterprise crew try to see others' perspectives...

Given the significant damage to the Enterprise and the stress on the crew after their encounter with the Gorn, the ship is in dry-dock for repairs. That leaves almost everyone with a time to relax away from their duties. Almost everyone. Spock (Ethan Peck) is trying to balance delicate negotiations with the notoriously fickle R’Ongovians delegation with regards to joining the Federation and some much-needed time with his fiancée T’Pring (Gia Sandhu) who has her own assignment regarding Vulcan dissidents.

But when an attempt for the two Vulcans to share experiences leads to Spock and T’pring’s psyches being swapped, it couldn’t come at a worse time for their respective duties.

Meanwhile, on board the Enterprise, both Una and La’an, both happy to remain on duty, discover they are less happy about their reputation of being ‘where fun goes to die’…

To quote ‘Spock’, this week’s episode sails ‘dangerously close to hi-jinks…‘ but is all the better for it.

Strange New Worlds, while not perfect, is proving week after week that it can take the best qualities of The Original Series and imbue them with a modern twist – both enjoying the mainlining of unapologetic nostalgia with a wry eye of irony.  Importantly, it may take its many cues from the 1966 original but it doesn’t do it with the same template each week, instead its ‘story-of-the-week’ format consistently allows it to offer distinct variations on the theme. In short – and echoing one of the threads of the episode itself –  it works out how to have fun. After last week’s intense battle for survival and display of the more serious side of going boldly, we  now have a distinctly calmer time with Spock, Amok. More ‘Orvillian’ than Orwellian, the episode has moments of genuine emotion but a sense of controlled chaos, telling several threads that all work within the framework of life away from daily duty.

Taking its title and opening scene concept from TOS‘s Spock-centric classic Amok Time, the production department plays reverence to the wedding/combat scenes set on Vulcan and reproduces the set, background and even costumes in a way that wholly recreates the feel of the original. In an episode that otherwise saves most of its VFX budget,  this fever-dream-like sequence showing Spock’s inner-conflicts helps provide one of the book-end VFX shots of the week.

The Spock and T’Pring body-swap (Freaky Farragut, anyone?) is a genre-trope that’s often hard to take too seriously – so, simply, it doesn’t. Though the stakes are technically high within the story, the presentation is done in a way that constantly makes us smile rather than wonder about the dramatic consequences of what could go horribly wrong.  The best scripts and stories allow issues to be addressed through metaphor and though it’s a little on-the-nose (or should that be ears?), it’s all an overt and whimsical way for the couple and the audience to examine their relationship… and if there are broad-strokes there, they are done with a lightness of touch. It would have been tempting to make each actor over-sell the other’s affectations and verge into slapstick,  but there’s actually better humour in the moment when, despite finding out what’s happened, Pike can’t immediately detect a huge difference. It would also be tempting to have the body-swapped Vulcans fully triumphing in their separate diplomatic missions in a way their counterpart could not but simply goes as far as showing that a freshness of approach is welcome and constructive (to a point) while not putting all that unlikely outcome on their shoulders. It’s Pike who realises the secrets to dealing with the R’Ongovians partly because of Spock/T’Pring’s actions and, in counter-balance, punching out an obstinate Vulcan trouble-maker is probably not the best solution to T’Pring/Spock’s meeting, but it is a satisfying one. The resolution to the body-swap problem is another brief, hand-wavery technobabble/magic sequence, but it casts an interesting light on Spock’s ongoing frustrations over his mixed heritage and how it plays out in others’ reactions to him, so in this case it’s all in the journey not the… designation.

TOS had Nurse Chapel (then played by Majel Barrett, later the wife of Gene Rodenberry and who also played Number One in the original pilot) have a flirtatious, if unrequited love for Spock and SNW has a fun time playing with a similar idea. Jess Bush’s more modern version of the character is one who has great satisfaction through her medical skills but has yet to find the same in her personal life. She prefers casual flings that don’t become too complicated and tends to run when they do. Perhaps it’s the unobtainable nature of fellow crewman Spock – a male who rarely sees any reason than to speak his blunt, honest logical mind but whom she can affectionately tease – that makes them such good dinner-table companions, each realising the innate value of the other’s completely different approaches.  Chapel would deny it in a heartbeat, but by episode’s end we know that it’s not that she doesn’t want a serious relationship, but that she doesn’t want  pale imitation of such, preferring the ease of non-commitment to disappointment. Her attraction to Spock is obvious and you’re aching for these two to get together, though the Vulcan’s current engagement and Trek‘s wider continuity suggest otherwise.

The ‘Enterprise Bingo’ thread of the story is silly and probably the most disposable but still works. Una/Number One (Rebecca Romijn)and La’an (Christina Chong) pretend they don’t care when they learn that their dutiful attitude to duty has earned them the secret nickname of ‘Where fun goes to die…‘ but it initiates a mission to show their frivolous side by creating their own list of rules to break in the forty-eight hours they have on the ship while everyone else is off on shore leave. The transporter/bubble-gum sequence is simultaneously pointless and thought-provoking – could the mere act of energising the gum actually restore its flavour? Their shooting each other with low-setting phasers in a quick-draw contest passes the time, but it’s the other book-end VFX sequence with seeing the beautiful R’Ongovian sail-ship coast overhead as Una and La’an sign the ‘scorch plate’ of the Enterprise, that actually provides another great wide-screen ‘moment’.

So far, Strange New Worlds has been trying out different things each week, all speaking to the larger coherent whole and in almost every case it’s passing with flying colours, gaining a well-deserved confidence that makes it not a boundary-pusher, but a welcome, smart and entertaining hour of sf that should please old and newer viewers alike. 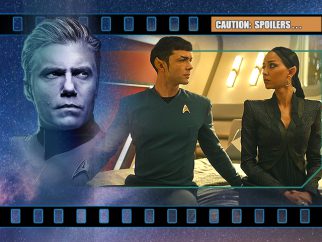