Kenobi confronts his padawan and has some 'Close Encounters of the Third (Episode/Sister) Kind'...

As Kenobi tries to get Leia home, the travellers find themselves in very hostile territory, not knowing whom to trust. Their journey to a local spaceport is fraught with problems where one slip could undo their progress.   But their presence cannot remain a secret for long and even as efforts to get them off-world continue, the ambitious Reva brings her plans to Darth Vader.

Sensing this might finally be a way to face down his old master, Vader arrives to personally hunt Kenobi down and a confrontation seems inevitable.

When last they met Anakin/Vader was but the pupil, now who will be the master and who has the higher ground?

It was a pleasant surprise to watch the first two episodes of Obi-Wan Kenobi and find there had been some misdirection as to the character’s mission… very little of little Luke and quite a lot of little Leia.  But it wasn’t clear whether Kenobi’s mission to rescue the pint-size whirlwind was going to be part of the set-up or the backbone of the series entire. (Kenobi promised Leia he’d get her home within a day, which seems mightily optimistic). With the arrival of the third episode, it seems to be the latter and that’s obviously going to draw some comparisons to sister show The Mandalorian and the whole ‘Lone Wolf and Cub‘ type remit that now seems to be the franchise foundation and brand.

There should never have been any doubt that James Earl Jones would return to voice Darth Vader. One of the most recognisable and iconic voices in the business, it would have immediately caused a huge disconnect if it had been anyone else. However it’s a relief to hear his dulcet tones and know the character, however despicable, is in safe gloves again. Parts of the confrontation between Obi-Wan and Darth Vader work well. Who wouldn’t get that primal tingle of generational excitement when both characters are metaphorically and physically circling each other on a remote, dusty planet of the Outer Rim? These are, after all, iconic characters and despite knowing it’s the narrative middle-ground between the prequels and A New Hope – so, neither the beginning nor the end – it should either be an epic battle or a tension-filled near-miss in which both sides know the inevitable is merely delayed. Instead, it’s somewhere in-between and what amounts to a simple game of tag, punctuated occasionally by some aggressive and up-close swordplay. Kenobi is doing everything not to face his corrupted padawan, unapologetically running away, perhaps  – as he says – to draw the Sith Lord away from Leia and Tala, but also because he’s nowhere ready to engage. It’s been interesting, perhaps more accurately frustrating, to see so little light-saber work from the title character who seems more than happy enough to use blasters whenever the need arises. Here, it’s Vader that initiates every single physical blow and, frankly, has the metaphorical and literal higher ground and out-maneuvers him at every turn. When Vader drags Kenobi’s beaten form through molten-hot flames, it should be the end of the Jedi Knight – though he’s saved by the actions of yet another Lucasfilm-marketing-potential droid, NED-B (a hulking, strong, silent type that others underestimate – feeling like a variation on ‘Lennie Small’).  With that escape, Vader/Anakin doesn’t charge manically forward, knowing he should be able to stop them, but shrugs and seems to think ‘Next time… which feels unrealistic for such a pursuit. The equal problem is that having this battle in the third episode makes one wonder about the momentum. Will there be a second battle before season’s end and will that dilute the impact of such, knowing – again – it will have to be unresolved to tie-in to continuity?  Personally, I want to keep these characters apart and circling, it’s far more interesting.

Apart from some questionable continuity to the main mythology, there’s also some minor logic-disconnects along the way that don’t annoy but certainly niggle. Who was expecting that Kenobi would use his Jedi mind-tricks to avoid capture from the already dim-witted Storm-troopers? No, he just awkwardly makes up inconsistent lies which the foot-soldiers shrug and believe. (It seems like the show is going out of its way to make Kenobi almost amateurish in actions and reluctant to act in any recognisable way even when it would be the easier course of action). Later, the laser-barrier that prevents the ‘truck’ owned by Freck (voiced by Scrubs’ Zach Braff) from passing doesn’t stretch across the entire path and while it might work well in stopping traffic, there’s really no reason for Kenobi to blast it if they’re just going to continue on foot… they can merely walk around it. During the Vader battle, Kenobi’s lightsaber is thrown from his hand and there seems no way that NED-B could find and pick it up and carry the fallen knight, but who knows?  Equally, when Tala doubles back to help Kenobi, one would expect her to walk right back into Reva’s firing-line, but, instead, she pops up again topside in the quarry to provide covering-fire for Kenobi. Maybe she took a different route (though why she’d do that doesn’t really work) and, more to the point, if Reva is following their trail through the tunnel, how is it Leia reaches the rendezvous point only to find Reva already waiting ahead of her?

Cast-wise Moses Ingram continues to impress as Reva and it’s good to see the cast of Star Wars, Star Trek and anyone whose knuckles don’t drag on the ground, standing up for her in the wake of inexcusable racist online harassment. Ingram deserves far more respect. Reva is clearly ambitious, the kind who no doubt holds some dark secret, though whether that will help or hinder her in her singular drive to rise to Vader’s side we’ll have to see. It’s also good to see the always excellent, if consistently under-used Indira Varma playing Tala. We’re being introduced to a network of resistance/rebellion hold-outs operating under various ‘occupied’ areas and one hopes that most won’t be there for mere collateral damage.

A solid enough episode that continues the high production values and fan-service and one that will obviously be carried by the rematch aspect of its story. We’re already halfway through the run and one wonders what comes next? 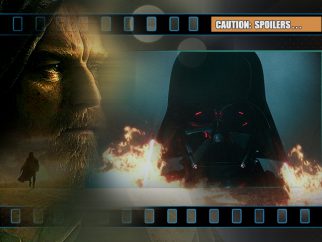