Evil may never be truly defeated, but it seems like the kids (and adults) of Hawkins may have triumphed for the time being. The Byers may have left town, but the ties that bind them to the town still remain strong, if stretched.  However, a series of horrific deaths in Hawkins seem to be causing more pain for a community already scarred and when fingers point to local rocker Eddie Munson, no-one wants to hear he’s not guilty. After all, he heads up the local ‘Hellfire’ Dungeon and Dragons club and everyone knows that game is a gateway drug to true damnation!

Except Dustin, Steve, Nancy, Max, Lucas and Robin think differently. They may have tried to get on with their lives, but they recognise the signs of something stranger in the mix.

Something is making its mark in both Hawkins and the Upside Down and without Eleven’s ‘super-powers’ what can the kids do?

Meanwhile, in California, Eleven is facing the trials and tribulations of being a ‘normal’ teenager, unaware her very abnormal past is about to come calling…

Though not quite reaching the memorable chaos of 2020, 2022 has certainly been… strange. There’s Strange New Worlds, courtesy of Star Trek; Doctor Strange navigating through a Multiverse of Madness courtesy of Marvel and now we have Season Four of Stranger Things.

Amid the nostalgic feel, the wit and the love-letter list of homages, much of what we love about the show remains intact, but with something of a chaser. There’s text, subtext and subterranean text galore, from teenage bullying, to sexuality, to witch-hunts, geo-politics and cultural references galore. The extended running times are welcome, each episode increasing over the previous to a nearly feature-length ‘finale’ clocking in at nearly ninety minutes. However there are some problems with pacing – or rather the amount of stories the season tries to tell. It’s one thing to have your cast start by being spread out and then to slowly bring them back together, but the series does try to spin a few too many plates and in the end it’s difficult to remember where you left some of the characters. Given that even the members of one group split up on separate missions, there comes a time when you have to keep reminding yourself  of the whos and wheres…that it’s Mike, Wil and Jonathan are on the West Coast with Dustin, Steve, Nancy, Max, Lucas and Robin still around Hawkins.

There’s a LOT going on. Arguably, there’s too much going on as threads initially seem to fray rather than bind. Early in the season, it seems like two opposing creative forces are challenging each other for the show’s tone and direction. There’s the youthful element of evolving relationships, the delightful quirks we’ve come to know and love and the connections driven by the trauma that the previous chapters have inflicted on Hawkins and its inhabitants  – some of which is quite broad and almost tropey in execution. (That being said, it’s deliberate – Stranger Things consistently seeks out the tropes and immediately skews and subverts them for its own purposes). Those seem somewhat at odds with the newer, grim body horror on show – this is far more graphic than earlier runs and it’s quickly clear that the season isn’t afraid to pay quite graphic homage to some of the best horror of past decades, including a nice piece of casting for Victor Kreel and multiple nods to the classics of the era. But, admirably, even some of the more innocuous or broader-stroke moments of early episodes take on a deeper significance as the volume plays out. You think Eleven bashing a truly awful bully with a roller-skate is just 90210-type angst to demonstrate classic teenage growing pains… not so much by the time the episodes play out and we see just why Eleven was so triggered by the bullying.

The ‘kids’ are more than alright in the acting department – providing the foreground story even while the older, veteran performers supply the boundary-lines. The young characters have all grown but not entirely changed – yet. They are at the point in their lives where they are becoming aware that things do change and the ties that bind shift uneasily even if they still bind. Eleven is telling Mike everything’s okay in her life when it’s clearly not and his letters aren’t as affectionate as they once were. Nancy (Natalia Dyer) and Jonathan (Charlie Heaton) are separated by geography and denying the strain they both know it’s put on them; Nancy and Steve (Joe Keery) also look close to rekindling a Season One romance.  Robin (Maya Hawke) is scared of coming out to the girl she likes Max (Sadie Sink) is still suffering with conflicted emotions after the death of her step-brother. There’s also clearly some difficult things below the surface for Noah Schanpp’s Will who seems overtly frustrated and specifically adrift. (There’s some subtle undercurrents in play about Wil’s feelings – how specifically they’re going to play that out given the late 80s and early 90s were still less than all-embracing will be interesting to see… though horror has always been a metaphor of sexuality and alienation).

And the adults? Hopper (David Harbour) has survived his Season Three sacrifice but the story-arc of his trials and tribulations in a Soviet-era gulag seem to have staggered in from a different production entirely and though there’s some great performances, as you’d expect, it often feels like a desperate way to make time for Harbour’s involvement and a way to keep Winona Ruder’s Joyce and Murray (Brett Gelman) estranged from the kids’ adventures. There’s the welcome return of both Matthew Modine and Paul Reisman, both extending the characters that we thought had been written out some time ago with a narrative that makes their presence make a reasonable amount of convenient sense.

Packing things out even further, there’s also new faces with the likes of Henry (Jamie Campbell Bower) in a supporting role that becomes very important and dis-orderly and Joseph Quinn – with every inch of a young Robert Downey Jnr-esque performance- as Eddie Munson, the hard-rocker who becomes the target of the town’s easily-led vigilantes.

Soundtracks always provide the prestige of the period piece and Stranger Things music once again helps rather than dominates – with the show’s use of Kate Bush’s Running up that Hill bringing the classic back to the top of iTunes downloads. As expected VFX are quite extraordinary. Once again the Upside Down is rendered in appropriately sinister and decaying style, enough to make the skin crawl and to feel every bite and nip from its detritus life-forms.  But it’s the performance-capture transposing Millie Bobby Bown’s teenage form onto her younger self that allows an impress vault across the ‘uncanny valley’ and though the shifting of her character’s representation across different times during the flashbacks can sometimes be confusing, the actual manipulation of pixels is near-as-perfect as one could hope for. Just seeing Brown on the promotional tour for the show and the footage of her on screen as Eleven, shows how skillful the post-production efforts are in terms of re-rendering the Eleven to whom we were introduced back in 2016. Brown remains the cornerstone of proceedings, but it’s definitely an ensemble show full of breakout roles to be applauded.

Those paying close attention to the story’s twists and turns may well be able to piece together a major part of the climactic reveal that closes out this first volume of Season Four (with two even longer episodes due in July) – I had an inkling of the major beats but it doesn’t stop the tense  and effective build-up. The villain’s explanation and clarification of his back-story lasts too long, ultimately feeling more like exposition than revelation, but it’s still a decent pay-off.

If uneven and imperfect, the special alchemy that the Duffer Brothers have brought to Netflix with Stranger Things – setting new records every time the show airs – is still in place, not helped by the extended time between seasons, but also not crippled by it. I’d gone in thinking this (and the second half of the season, two even longer episodes in July) was the last hurrah for the show, but – of course – there’s one more confirmed season, due next year, as a true finale. So far, hope and fear endure. All Stranger Things, like good things, must come to an end, but even if that end is remotely nigh, there’s still some icky, gooey, life and death in the formula to relish and everything to play for… 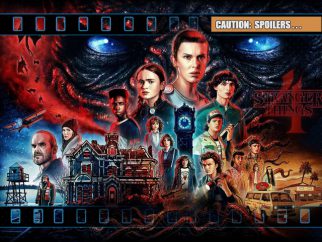