The Enterprise comes under sustained attack and has to rely on La'an's childhood traumas to provide strategy...

When the Enterprise uncovers what appears to be the wholesale slaughter of an entire colony, the question of the whos and the whys of the attack become moot when the Enterprise itself comes under attack during the ferrying of the few survivors. La’an Noonien-Singh recognises the tell-tale signs of a trap and manages to give the ship and crew valued seconds to avoid destruction.

La’an notes that this has all the strategies of the Gorn, a race known for their brutality but hardly ever seen outside the few who’ve survived any encounters. The Enterprise is vastly out-gunned, so the crew begin a game of cat-and-mouse with the ebnemy ships inside a nearby nebula… but can Pike and his crew find a way to out-maneuver a species all too willing to play the waiting game…

Those who know The Original Series will remember the reptilian Gorn, that alien race with whom Captain Kirk engages in hand-to-rubber-suit-hand combat. It’s a beloved but hokey image, born of the limited special-effects budget of the time. However, it’s probably better to put that out of your mind when watching the latest episode of Strange New Worlds, an entry that features the alien race as the antagonists.  Trek has always made its remit about exploration and the ties that bind, so it’s interesting that only four episodes into SNW, we have a story that’s more brutal and less idealistic than one might expect and is essentially just about surviving an unrelenting hostile encounter. It’s also one that names the Gorn while keeping them off-camera safe behind CGI’d  starships, but aliens and craft that are brutal and merciless.  Here, the Enterprise crew know very little about the race, gleaming tales of their legendary savagery, given more detail by the fact that La’an Noonien-Singh (Christina Chong) was held captive and brutalised by them as a young girl. When others talk of the fact that no-one knows what the Gorn looks like, she notes that the caveat there is that plenty of people have seem them in the flesh, it’s just that so few survived to tell people. La’an’s own memories of her captivity are clouded and buried deep – part of her way of surviving the ordeal – but she does know that the Enterprise’s only course of action is not to fight but to run… something that gives them a short amount of time to form a strategy to survive.

We’ve seen Pike as an affable and charismatic captain, but here he demonstrates his harder, fully on-duty leadership qualities – having to make decisions at speed and often knowing that each is the lesser of two evils. When one decision saves the ship in the short term but also costs the lives of crewmen, Pike is visibly torn by the weight of that but also able to move forward. He’s also pragmatic and when presented with tough choices is wise enough to defer some of his actions to La’an’s experience. So begins a game of cat and mouse with the out-armed and out-numbered Enterprise having to switch between flight-and-flight modes inside a nebula (though some of that is labelled ‘The Pike Maneuver‘ it’s similar to something we saw Kirk use in The Wrath of Khan). The most obvious VFX on show are largely down to the starships and their background and they are handled effectively, often making vast nebulas and star-fields quite claustrophobic given the high-stakes.

In instances where one crew member is highlighted, it’s sometimes necessary to conveniently sideline another and after having the spotlight on her in the last episode, Rebecca Romijn’s Una/Number One is injured and carted off to sick-bay so that La’an has to step in to her duties again. (We do get Una instructing Babs Olusanmokun’s Dr. M’Benga to priortise transfusions for other crew-members rather than herself, which does make one wonder on how freely her blood type mixes with humans after last week’s entry). Spock, an ever-present, problem-solving character in most of the episodes to date, attempts a Vulcan mind-meld to dig deeper into La’an’s memories to provide clues as to how to handle the Gorn. It also seems clear that Celia Rose Gooding’s Uhura is quickly becoming one of the pivots of the new series and the mentor/student roles she has with Bruce Horak’s Chief Engineer Hemmer is a key part of that. During the attack, both are trapped in the cargo hold and have to work together to solve the problem of basic survival. Both characters are being developed well and in interesting modern takes on traditional Trek values.

One would suspect that the emergency evacuation of the colonists near the start of the episode means that we’ll see more of them later, but despite some speaking parts in the aftermath of the attack, that element seems to eb forgotten pretty quickly. On the plus side, it’s probably no accident that the episode, broadcast a few days before the US’s Memorial Day, also has the crew celebrating their past deployments and wearing badges to honour those they have served with – it’s a nice touch that acts a subtle, timely tribute rather than being distracting.

Another solid entry, showing the series isn’t afraid to ramp up the stakes and take a slightly different and more confrontational tone when needed. 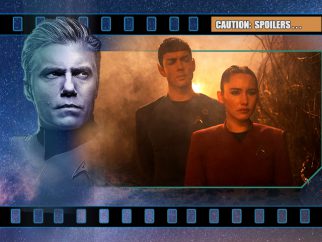