Ewan McGregor makes a welcome return to his Kenobi role to chart the time between trilogies...

The Jedi have fallen – almost wiped out by the rising forces of the Empire. Those that survived are scattered across the galaxy and in hiding, well aware of the bounty on their heads. One such Jedi is hiding in a Tatooine bar and is the target if the Inquisitors whose job it is to hunt them down.

This is not Ob-Wan Kenobi, but a younger knight unable to stop himself from helping others, even at great cost to himself. Frustrated that his presence may also become known to his pursuers, Kenobi has one piece of advice for the fugitive – bury his lightsaber among the dunes and walk away from a battle that is already lost to him.  But the Empire doesn’t give up on its quarry so easily and on the distant world of Alderaan, there are forces being put in place to draw the Jedi – and Kenobi in particular – out of hiding.

Against all his instincts, but driven by duty and friendship, it’s Kenobi who will dig up his own weapon of choice once more – and return to the stars…

There’s been huge anticipation for the latest Star Wars series, Obi-Wan Kenobi – once considered to be made and presented as a movie before Solo made Lucasfilm and Disney reassess their plans. It’s highly-unlikely Obi Wan Kenobi will be watched by many casual viewers, unfamiliar with the character. So ingrained in the cultural psyche, there can be few who don’t know at least the basics – both from the original Star Wars and then the prequels. It’s The Phantom Menace, Attack of the Clones and especially Revenge of the Sith with which this new series has the most connective tissue. For those wanting to keep clear on their timelines, the events in Obi Wan Kenobi take place ten years after the Star Wars prequels. This Tatooine, the backwater where much of the franchise’s action takes place, is still spinning around its two suns twenty years before Luke Skywalker left the planet and several more before The Mandalorian and Bobba Fett played out their various strategies in nearby streets, alleyways, saloons and dunes.

After what amounts to a just-to-be-sure ‘Previously on Star Wars…‘ set-piece of clips, there follows a moment where the Empire sweeps in and fulfils its Order 66, the infamous killing of the young Jedi apprentices and their masters. Coming, as it does, in the week when a classroom of children and their teachers were slaughtered in Texas, it may make one shift uneasily on your couch, but given that the event is an established and key part of Star Wars mythology and lensed months ago for the show, it would have been impossible to remove it. Whether it is down to Disney mandate, or blind luck, you don’t actually see the infants’ on-screen deaths, though it’s clear what is implied in the scenes of the raid and it carries weight.

The Jedi order shredded by the rising Empire, Kenobi has taken his ‘hiding’ to serious levels: he lives in a cave, a fair distance from the enclave and what seems a fairly lengthy, inhospitable daily commute to what passes for a meat-packing process-plant. This level of a mundane existence shows serious commitment to his anonymous cause. His hovel is faithfully-rendered from the original Star Wars, essentially a ‘SandBnB’ hole in a cliff-face with a few home improvements but some impressive intergalactic wifi. But this is a knight who feels his day has passed. He’s aware that the ‘good guys’ lost. He yearns for better days and eventually decent tomorrows, silently acknowledges his own past failings (his actions essentially created Darth Vader, the armoured Sith warrior who was once his apprentice, Anakin) but avoids any situation where he might be called on to fully act on the code by which he used to live. And therein lies the catch… his enemies know that ‘once a knight, always a knight‘ and have worked out that killing innocents is the way to bring the errant knights to justice -forced to act in defense of the helpless or stand idly by watching wholesale slaughter. Obi-Wan, or Ben as he now calls himself, wants to avoid having to make that choice.

Despite the series name, it’s clear that the show is also interested in Luke and Leia’s earliest years – though like Kenobi’s strategy, it maintains its distance keeping them as outliers and boundary-lines for Obi-Wan’s mission – showing the importance of what he seeks to hide and protect from darker forces. The trailer for the show indicated that we might see something of a young Luke, with Kenobi keeping an eye on him, knowing that the Force is or will be strong in him. Yet, in some ways, it was a nice piece of misdirection as there’s barely a glimpse of him in the first episodes… and far more of his sibling. It’s the ten-year old Leia that forces (no pun intended) his hand and makes him take up the cause once more. We see Leia’s early days on Alderaan and Vivien Lyra Blair makes a perfectly charming and dynamic impression from the start. It’s her kidnapping that makes Bail Organa (good to see Jimmy Smits reprising the role) seek out his old friend and the weathered Kenobi beginning to realise the cost of hiding could be greater than the cost of discovery.  Temeura Morrison also briefly turns up as a blink-and-you’ll-miss-it, down-on-his-luck clone trooper vagrant.

McGregor is clearly happy to be back in the role and this glimpse into an uncharted time of Kenobi’s life between the eras we already know gives him the best of both worlds. McGregor is a consummate performer, a good pool-player (to which I can personally attest), often under-rated and can handle both the emotion and physicality of the role…. we see the lost, hollow and resigned look in his eyes during his daily routines, the montage (literally) of regrets of past decisions and the mixed emotions that being called back into service brings. We really haven’t seen Kenobi in these kind of surroundings before and the character (rather than the actor) looks less at home here, to be sure. It’s unusual to see him fighting in more gritty hand-to-hand than the graceful pivots of his younger self or the steady-but-sure gait of the Sir Alec Guiness years.  Interestingly, though much is made of Kenobi retrieving one of the lightsabers he owns, he never actually uses it… he’s ready to when Reva corners him but is shaken by her revelations that Anakin is still alive (how does she know that?). Truthfully, of all the recent characters on the Lucasfilm screen, it’s good to finally have a title character worthy of the rank rather than just a  device or pivot for the VFX and having supporting players to steal the limelight.

Moses Ingram as Reva will be an interesting new character to watch – though she’ll also likely be divisive. She walks a delicate line between dark-sided zealot and petulant wannabee as she consistently disobeys and snarks at her fellow Inquisitors. It’s a very modern take (welcome in the sense that it’s a black woman in a key pro-active role) but so in-your-face that, despite obvious battle-skills, one feels she might not have lasted this long with such an ‘attack now, ask questions later’ attitude within such an ‘organisation’ built on quieter threats, limited displays of their powers used as intimidation. However the strategy to draw Kenobi out undeniably works.

Joel Edgerton returns as Luke’s uncle Owen Lars, a man who takes the protection of Luke and his family seriously enough to resent Kenobi wanting to be around, knowing the Jedi won’t be able to resist teaching him later.  Rupert Friend portrays the live-action Grand Inquisitor (previously voiced by Jason Isaacs in the animated arm of the franchise) and keeps him sinister. Kumail Nanjiani also adds some moments of levity as Haja Estree, a conman trading on a Jedi mystique who comes face to face with Kenobi and has to make some serious decisions about his occupation. Flea, of the Red Hot Chili Peppers fame, also cameos as street-level kidnapper Vect Nokru.

Production-wise, you’d expect nothing but the highest quality and between the sandy dunes of Tatooine that dominate the first episode to the dark and seedy streets and alleyways of Daiyu in the second, there’s definitely a sense of scale and world(s)-building. True, there’s only so much you can do with sand and Daiyu’s locale is similar to the rain-soaked neon hives of scum and villainy we’ve seen in Madripoor/Blade Runner/Hong Kong (The Star Wars Underworld test footage is the nearest touchstone to date..) but these two locations are both believably different yet also clearly part of the same universe, where people do what they must and can to scrape by. These may be studio-sets, but the latest tech expands their reach to impressive effect.  That being said there are some clear wire-works sequences when it comes to the choreography of  parkouring Inquisitors and the aliens range from creative creatures to obvious rubber suits.

The Obi-Wan Kenobi season is only six episodes long (the shortest Lucasfilm run to date) with all subsequent episodes dropping on Wednesdays – but the strategy of releasing the first two episodes together was likely a wise one and it shows the breadth the show intends as well as its depth.  Not without some problems, it makes a strong enough impression with its debut, skewing darker than anticipated but knowing and delivering its expected checklist of ingredients… and though it maintains the Lucasfilm directive of filling in the blanks rather than moving forward, it feels like there’s enough potential here to feel less like opportunistic connective tissue and more like a welcome volume in a story where we’ve legitimately only glimpsed certain details to date… 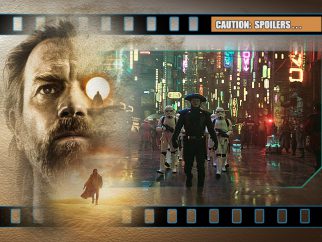 Disney+: The (Dare)devil will be in the details…