Time is a Battlefield... especially if your surname is Picard. But will there be more casualties before the war is won?

Picard and his crew attend the pre-launch ball for the Europa Mission, hoping that there ‘cover’ story holds and that they can watch over Renée without drawing unwanted attention… even if that means causing some musical distractions. Unfortunately, it seems as if their efforts could be for naught as ‘Q’ continues to influence Renée’s doubts and Doctor Adam Soong has made it his own mission to make sure Q’s wishes play out.

But even as Jean Luc heads for a fateful encounter with Soong, the doctor’s daughter is about to uncover some horrifying truths of her own…

As predicted this episode is the S2 equivalent to S1’s Stardust City Rag, where the crew get to dress up and go undercover. There’s definitely some moments of levity but apart from a few asides, this is less humorous than that previous episode and more of a reconnaissance mission to protect Renee. It’s not that nothing happens in the hour – there’s several key revelations and a crisis – but the over-all pacing is slower, the desperate, racing agenda slowed to a strategy-meeting and oversight as the team manage to get in to the event and then have a mission to ‘mingle’. Director Jonathan Frakes continues to impress and make the most of his long-standing relationship with the franchise.

I am impressed that Pat Benatar lyrics have survived the centuries and that Agnes seems momentarily invincible as she hits the gathered party-goers with her best shot, singing an impressive torch-song variation on Benatar’s ‘Shadows of the Night‘. In itself it’s one of those moments that shouldn’t work but as a fun interlude and showpiece it’s done well enough to get a pass and Alison Pill delivers. In many ways the Agnes/Borg Queen bond is the most interesting part of the episode as Annie Wershing’s Borg Queen ‘passenger’ seductively prompts the usually restrained and self-isolated Agnes to indulge herself and be impulsive. This really isn’t a side of the Borg Queen we’ve seen in previous outings, though – technically – this is arguably a different reality’s version and it works well. Of course, there’s an ulterior motive to Queenie’s whisperings and the rush of endorphins allows the alien presence to switch from invisible influencer to the driving seat. The best, most stylish scene in the episode is in those closing moments where we see Pill’s Agnes striding through the LA streets, her red party dress blowing in the wind. It’s a moment that would have been just as appropriate in, say, Westworld.

Picard has a talk with Tallinn about her looking so similar to Laris, but though there’s still no reason cited for such, it does give her the opportunity to point out Picard’s tendency to distance himself from others and he makes some astute, almost flirtatious observations about her.  I like Orla Brady and her performance, but I’m still a little baffled by Tallinn as a character. Her role is to apparently watch and protect Renee who she knows is important to the timeline but, well… frankly, she doesn’t actually seem that good at it. There are several examples where she ponders whether Renee should go on her space-flight (surely Talinn knows the events that should happen or she wouldn’t know how to do her job) and there’s no clear indication she’d have worked out anything was wrong with Renee until it was too late (which would be rather useless for anything other than an historian’s regret). The ‘watch but never interfere’ aspect seems contradictory to the situation and she’s a character that, even operating from the shadows, needs to be both active and reactive… and at the moment she’s being used more as commentator and simple exposition.

Again, while it’s collectively a lot of fun, some of the quibbles in the episode come from that pesky connective-tissue issue that continues to conveniently smooth and speed the plot from pesky questions, but just creates more. (Not least: Stewart and Jean-Luc are great orators and Penelope Mitchell sparks in their dialogue, but a minute-long pep-talk about self-confidence is what possibly prevents a fascist future? That’s beyond impressive, though we still have half a season to go, so one guesses there’s slightly more to it!) But, forensically, the plot-gaps get steadily bigger… When Jean-Luc saves Renee from Soong’s reckless/targeted driving, he’s critically hurt (we know this from the moment the episode begins before we flashback), but the very next scene is the team bringing him to Doctor Teresa Ramirez‘s under-the-radar medical centre. While it makes some sense to avoid mainstream hospitals (Picard’s unique body and status would involve too many questions), there’s no tangible plot explanation of how the team managed to leave a top-notch security event where they were being pursued ( not to mention the scene of a  spectacularly loud and vivid crime) unnoticed and traverse the busy city to get his bloodied form there (they have no vehicle and have no immediate way to use the transporters) plus – and this is the biggest head-scratcher – are we seriously meant to think that Renee, who is the crux of the entire season, watched someone who had just been giving her life-changing advice suddenly mown down by a car on her behalf and then simply went back into quarantine as if nothing had happened? To make sense, the audience really needs to see the fall-out and her hugely important reaction rather than dilute the drama and have it happen solely off-camera as if it was an afterthought.

The big revelation in the episode is that Kore is not Dr. Soong’s actual daughter but the latest result in a rack of failed test-tube attempts at eugenics. That’s probably not a huge shock to those who picked up on the doctor’s avoidance of questions regarding Kore’s mother… but it does continue to make Dr.Soong a conflicted character. On one had we’ve felt his apparent pain and paternal overriding mission to save his ‘child’,which allowed us to understand his ‘deal with the devil’ and accepting Q’s very conditional offer… but now it seems it could be the drive merely to have a successful scientific outcome. Having Kore be played by Isla Briones seemed somewhat contrived last week, but if she and the original ‘Persephone’ were the blueprint of an experiment, then it’s possible that later generations of the Soong dynasty might have used some of the same material. It’s a stretch, but not a huge one and given the Soong family dynamics over the coming hundreds of years the fluid morality is consistent. It also gives Brent Spiner some more grist for the mill which is always good.

It’s still tempting to think that whatever Q’s state of mind, something about the entire season’s premise has a feeling of being ‘other’ rather than just ‘time-travel complicated’. The string of familiar-faces and Picard-family centric themes suggest there could be more revelations about how ‘real’ this all is in the end… (especially adding the in-story illusions such as Jurati’s visions and next week’s detour into Picard’s mindscape itself.

However, it remains a highly watchable show that just needs to tighten its story-telling seams to match the tapestry of good performances… 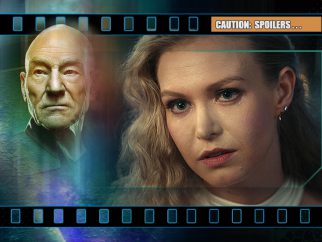 Hit and Myth: Marvel continues to have all the ‘Knight’ Moves…

Walking Dead’s final mid-season finale: A Hill-Top to die on?