Hit and Myth: Marvel continues to have all the ‘Knight’ Moves…

The suit maketh the man... but which man? Steven Grant is beside himself trying to find out...

Steven Grant has survived his dark encounter at the museum… but has no idea how. He wakes up back in his loft apartment and reluctantly heads back to his place of work. There’s damage, to be sure, and footage of Steven acting very strangely, but no sight of the ‘hell hound’ that was chasing him. His bosses think he needs help and though they give him details of a good psychiatrist, they also fire him. Still not sure how much of his recent experiences are real, Steven wonders how he can know for sure.

But Marc Spector – that voice in his head – is just as desperate, wanting out of Steven’s body so he can get on with his mission and un/holy quest. The problem is no-one is leaving Grant alone and Spector can only do so much if Marc isn’t going to let him out.  When Harrow reaches out once more, some of the details involving a war between the gods are revealed, but can Steve trust anyone?

The second episode of Moon Knight does a decent job of laying out some more of the mythological groundwork of Marvel‘s latest series and answers some of the questions raised by the interesting but scattershot opener – not that everything lines up. The series’ production values remain just as strong as the opener. Amid the design work, researched elements, specially-created sets and action scenes are wonderfully lit London alleys and streets and solid framing of faces and figures against the night. Say what you want about the askew story, but in its widescreen and minutiae (and nice easter Eggs such as GRC bus advert helping people who suffered under Thanos’ blip) it consistently looks rich and nuanced  in the moment.

On a physical level, Isaac continues to do a great job of delineating the various personas that are fighting a war for control of his body, even if Steven often remains mostly befuddled and bewildered – though, frankly, he’s asking all the right questions by challenging everything he’s being told.

That physical acting, with all its drama and humour, is key.  Steven’s joy in finally gaining some control over his unusual predicament (and apparent super-strength with it) is palpable, even when he’s being hit by fists and cars. The gait and posture change each time, giving clues to whom we’re seeing, even before they speak. Steven hunches, Marc strides and the Moon Knight persona, well, sort of Batmans. The actual choreography of fights is still on the ball, up close and personal. One of the creative choices (which might also have helped with the budget) is having several sequences where Steven’s pursuing ‘devil hound’ is invisible, so all we have is the reaction choreography. Interchanging that viewpoint with some shots when the VFX creation is in the frame helps generate the surreal aspect and that those watching from a distance simply think a guy is out of his mind.

Within a show that’s a little different from any Marvel show to date in its style, the fluid aspect continues in the show’s titular hero – and the very idea that the ‘look’ of the costume/armour differs according to the psyche that’s ‘behind the ‘wheel’. When Steven seems to gain the upper hand and finally suits up, the suit is not the traditional cowl and cloak we’ve seen but an ivory dinner suit and mask. It reflects the different takes the comics gave us over the years and blends their rhyme and reason together.

The elusive but semi-controlling Marc Spector personality gets a little more detail. We’re told that his capable and ruthless secret-agent-level status is responsible for the slaughter of several archaeologists as he travelled across the globe on his quest, though one suspects that bio is not that cut and dry, especially considering that cult-master Harrow (Ethan Hawke) is the source of the information. It’s also not entirely clear whether Marc and the Moon Knight personas are the same and it’s just the costume that varies. However, that news of Spector’s history explains why Steven is loathe to give up his body to someone who may use it as a tool to kill innocents… Steven may be weak in some surface ways, but he has principles. The flipside feeling is that Spector is capable and pragmatic and sometimes desperate, but his anger at Steven is because he’s getting in the way of his mission and – more importantly – possibly putting lives in danger.  We don’t know yet how this fracture happened (or if Steven is as real a person as Marc appears to have been) but this set of dueling agenda gives the series some nice bite when we’re not entirely sure who we should be rooting for. Given Marc’s point-of-view and Khonshu’s  agenda (saving Spector’s life but making sure he can never leave his control like previous avatar Harrow did) it’s clear that we’re not in black/white/right/wrong territory and that the respective gods seem to be pretty fickle with those who serve them. (Khonshu tells Marc he will select someone else close to Spector to be his next avatar if Marc fails and that’s possibly the only reason Marc stays ‘on mission’).

That reason is mainly Layla El-Faouly (played by Palestinian actress May El Calamawy) who appears to be Marc’s estranged wife – and a person very confused that her husband doesn’t seem to recognise her.  Spector doesn’t want to serve Khonshu, but definitely doesn’t want Layla having to take his place. Given Marc served her divorce papers (to create distance from the dangers) yet Steven knows nothing about them (nor, to be fair, that ‘he’ has a ‘wife’ at all, before today) does nothing to becalm matters, though  their pursuers and members of Harrow’s acolytes trying to kill them clearly complicates things further.

With the action appearing to segue out of London to a more literal pyramid-scheme, the landscape is opening up and with a third of the six-episode story already done, the pace is whistling along nicely. This could still be a marmite show, but the war between the Egyptian gods and the fact that neither of the opposing forces seem particularly divine, it’ll be interesting to see where it takes us… 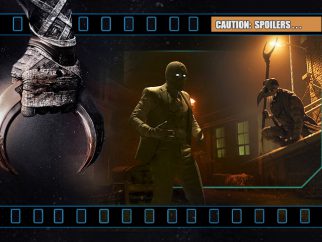