Walking Dead’s final mid-season finale: A Hill-Top to die on?

The post-apocalyptic pleasantries are over as moves are made that will change lives - or end them...

In the Commonwealth, events are moving quickly as classified documents showing the darker side of recent events get closer to being shown to the citizens.

Further afield, Hornsby decides that there’s no more time for pleasantries and diplomacy and moves to eliminate anyone who stands in his way, firstly Daryl, Gabriel and Aaron and then on to Hill-Top. However forewarned is fore-armed and nobody is going down without a fight.  Leah, who has her own plans of revenge will help Hornsby only as long as it suits her and as a bloody battle begins at the Hill-Top it becomes clear that the gloves are off and everyone has picked a side.

As a swarm of locusts fly through the area, like some sign from above, only one thing is certain… there will be blood.

And so, we reach the second ‘mid’ season finale of The Walking Dead‘s final run (the final third will likely be broadcast sometime around October)… and even the characters note that the sawrm of locusts passing through the area couldn’t be a more apt metpahor.

If last week’s episode was about people smiling through gritted teeth and getting ready for an inevitable pivot to more pro-active pursuits, then the series final mid-season finale – Acts of God  – is the moment The walking Dead’s current arc boils over with Hornsby getting more and more determined to protect his name and works and deciding that he’s got no more reason to hide from those he considers inferior to his plans. That means severe implications for Daryl, Gabriel, Aaron, Maggie and anyone who stands in his way.

Daryl, Gabriel and Aaron quickly work out that their mission with several soldiers – as dictated by Hornsby – is a guaranteed trap to dispose of them as Hornsby moves to take Hill-Top to eliminate Maggie and recover some of his misplaced self-pride. Thankfully our heroes act first. It’s a close-knit fight in an old junk-yard and both Gabriel and Aaron get hit during the gunfight, though it seems neither receive a fatal injury at that time. In what passes for mercy, Daryl gives one of the defeated soldiers the choice of saying what he knows and dying by a bullet or being left for the undead. The soldier chooses the former and the trio head off to warn Maggie – that’s if it’s not already too late. Hornsby’s latest ‘hire’ Leah is determined to make sure it is too late, happy to use some of Hornsby’s own men as collateral damage if it means she can kill Maggie herself.

Back at the Commonwealth there’s a close-call for Max when she attempts to copy revealing Commonwealth documents and encounters Sebastian Milton in the process. However the damning documents do make it out and Milton is furious when their details start circulating. It’s not clear whether Max’s role in the infodump has been exposed or not, but it will be interesting to see how her brother Mercer reacts.

Further spoiler warning – – – – that casual collateral damage aside and despite excellent use of tension… there are really only two full-frame deaths in the episode. It’s somewhat surprising that there isn’t a bigger death-toll. Given that the show won’t be able to resist killing off some major characters before the very final credits roll on the entire series, you might have thought that the show would have started its clear-out early, simply as a statement of intent and to keep everyone on their toes. Nobody’s safe!  Except, of course, some are. Unless it’s spectacular and sneaky misdirection (and if it is, kudos to the poker-faces) we already know four main characters (Daryl, Carol, Negan and Maggie) are pretty much immune from fatality because they’re certs for the spin-offs. Even Jeffrey Dean Morgan has raised an eyebrow over AMC‘s strategy of releasing details of those planned continuations… noting how it obviously acts as a spoiler for what’s to come and what’s not. It essentially robs the audience of being surprised by sudden deaths that were so often commonplace before the end was quite as nigh.

The first is a sudden headshot to Marco (Gustavo Gomez), one of the Hill-Toppers escaping with Maggie (but, with all due respect to the dearly-departed, a character who would be hard to pick from a line-up). It’s sudden and precise but the camera lingers on him just a beat too long as he stands up, giving the audience the briefest hint of signal he’s got micro-seconds left before something happens. The bullet comes from Leah’s gun as she emerges from the now gutted main building and framed by fire  – proving her military-service as a sniper continues to pay-off and initiates the forest pursuit.  The idea of  various figures traversing a similar wooded area without fully knowing who else is around or whether they’re exposed is always a good dramatic set-up and there are times during the episode where you wonder if one of the ‘heroes’ will simply shoot someone they know by accident.

The other fatality is… Leah after a head-to-head with Maggie that can be filed under ‘the villain talks way too much and therefore loses the upper hand’. Lynn Collins’ character is one of those that has made a significant impact after a retroactive introduction during last year’s ‘extra’ episodes detailing what happened when Daryl was away from the group over a year ago. She’s proved an interesting creation, but one that has almost always been framed by either her semi-affectionate or antagonistic relationship to Daryl and which – given what we know of the future plans – was always likely to end tragically. Still, if you have to go die on screen (and the supporting cast usually do at some point), then there’s some genuine intensity in the physical and mental games played out between Leah and Maggie en route to their final scene, so that when the inevitable happens it still feels brutal. As the end draws near, it’s clear Leah has the upper hand – for all Maggie’s experience and tenacity, it’s Leah who has the training. It’s Daryl, arriving just in time, who fires that shot – saving Maggie from Leah’s knife – and he does so with only the smallest amount of regret.  Leah may have just cause to hate Maggie, but as things played out Daryl still originally gave her a chance to leave and live. She chose not to leave and it was always going to be Maggie Daryl would save and he does so without missing a beat.

Amid the chaos there’s a long-time-coming redefining of the relationship between Negan and Maggie. They’ll never like each other because of what’s happened and the costs involved, but there’s an inherent trust that now exists between them. Negan wants to be part of the fight and something he’s good as, but Maggie knowing that this might be her last stand won’t trust anyone but Negan to stay back and protect Hershel. It’s a pivotal moment that will likely be the framework for how things progress to that announced spin-off.

One of the final moments is Hornsby tossing a coin in the air like a post-apocalyptic Harvey Two-Face, something he does twice within the episode echoing the arbitrary way he plays with people’s lives. The VFX people and editing give us enough time to see that the Presidential face on the coin is one William Milton, with the coin dated 1982. That gives some clarity to the alt-timeline of the show that’s only had lip-service so far. Given that US coins traditionally only feature dead presidents – then Pamela Milton lost her father (who she said previously ‘made sacrifices so we could all be here…‘) at least forty years ago (possibly more given the show’s elastic continuity with time-jumps) – and well over a decade of that being after the zombie outbreak. Unless that coin tradition was completely changed, then he couldn’t have helped found the Commonwealth before daughter Pamela’s current position as some fans has pondered. It also suggests that he had to have replaced  Carter or Reagan in the Presidential line that we know.

It’s a solid episode that would have worked better without foreknowledge of franchise plans, but it does indicate that as we go into the show’s final part of its final season, the pleasantries are done and chaos is likely to ensue. Overtly fascist flags raised over Alexandria, our heroes scattered. Who else will be left standing and what will be left of them is the next question. 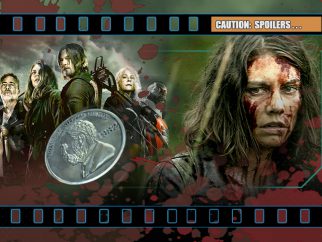