Snowpiercer's survivors plan ahead but seem to be 'Bound by One Track' and the ghosts of their mistakes....

While Layton continues to have visions of a future in the warmer climes of Africa and New Eden, many others are feeling the tug of past mistakes. When Snowpiercer’s advance is blocked by long-discarded carriages on the track, a cold piece of the train’s history is revealed.  Alex wants to make good on a tragic memory and seeks to embrace the ghosts that haunt her footsteps – those of her mother and also of something and someone she left further behind all those years ago.

An imprisoned Wilford also has time to calculate what is happening elsewhere on (and around) the train and to let his mind wander as he remembers and considers past decisions.

But even as Alex and Layton are forced to consider asking their enemy for help, it seems that someone else, hurt by more recent memories, wants Wilford dead…

There’s an ethereal, dream-like quality to the latest Snowpiercer and not just in the sense that it sees the return of Jennifer Connelly to the train – if only (for the moment) in spirit-form – glimpsed in desperate visions by a number of the crew in their separate hours of need.

Actor turned prolific director Leslie Hope (24, NCIS in front of the camera, Law and Order, Van Helsing, Emergence and the forthcoming Strange New Worlds behind the lens, to name but a few) gives us an episode that glides along with fine visual touches and sleights of hand… and manages to combine the cold, hard realities of the train (silent, icy bodies glimpsed in frozen embrace) with something more spiritual and intangible with an askew framing or lens. It would have been easy to make a phantom-as-metaphor a tropey, hokey stunt, but, instead it comes across as heartfelt. The assured touch and technique give an insight beyond the obvious, showing and telling us the internal thoughts and monologues of the characters who are all putting up strong fronts but are feeling the weight of recent events.

Connelly featured in brief snippets of footage teasing the season ahead of broadcast and it was impossible to know if the deliberately evasive show-runners were indicating she’d somehow survived in the cold, barren wastes or not. Certainly, it had appeared her situation was bleak and, logically, there’s no obvious way she could have made it. Equally, having Melanie being a driving force in her legacy rather than in her ‘real’ presence is an interesting card to play and could work well as the story moves forward (though one that should use Connelly sparingly if that’s the route taken). As was always possible, most of those teaser snippets were from spiritual or flashback scenes in this episode, though close scrutiny of that teaser suggests there is at least one image – Melanie looking battered and bruised and wrapped up in a bed – that was noticeably absent. Make of that what you will… (and always remembering, the show has actually ‘killed’ characters on screen before, only for them to come back later).

It did look for a second as if Wilford was also finally finished – and the idea of having two dead characters driving each side’s moral arguments for survival, despite their physical absence, could have been interesting. Given the show has taken some unexpected track-jumps along the way it was certainly possible Sean Bean’s bad guy was permanently out for the count and having Roche (Mike O’Malley) be the one to kill him (in revenge for the death of his wife) was a kind of justice. However, in the end Wilford clings on to life – unable to help Alex and her efforts to disengage the parked carriages but still breathing for another day. At some point the show will have to kill Wilford off, but for the moment Bean is giving us a character we love to hate.

Alex (Rowan Blanchard) has an ulterior motive for wanting to be the one to head out and release the clamps on the abandoned carriages blocking their way. It turns out that one of the carriages was her home, assigned to her by Wilford back in the day as he separated the crew out into their levels of use. When the carriages were dumped as surplus to requirements, Wilford willingly abandoned their inhabitants as well, saving Alex for his own purposes, but leaving the rest to die. One of those who perished was Alex’s childhood friend and Alex never got to say goodbye. Though it’s painful, she sees this as an opportunity to right that wrong in a minor way, finding the frozen body and leaving the ‘mix-tape’ CD they used to share. Alex also admits to the vision of Melanie that however much she hates Wilford, there’s a familial love for the way he raised her and it’s the key to the power he has over her. ‘Melanie’ notes that acknowledging the importance of people is half the way of moving beyond them. There’s also some of the episode’s most unsettling moments with Hope’s sinister shots expertly generating unease as Javi (Roberto Urbina) has visions of the rottweiler that savaged his face. What’s past is prologue, or, at least, good for great but quiet drama.

After some heavy-flirting and distinctive chemistry, Ruth (Alison Wright) and Pike (Steven Ogg) finally give in to their mutual attraction and, shockingly, making Ruth late for her assigned shift… though what we actually see is certainly PG-rated.  Given that Ruth knows Layton’s lie and Pike – though on the side of the ‘angels’ – has little time for Layton himself, believing that his old friend isn’t the right man for the job, this will likely be a relationship worth watching as they navigate their way through some of those colliding loyalties. It’s also good to see Mickey Sumner’s Till being used well, here keeping a watch on Archie Panjabi’s fragile Asha as the newcomer tries to hold it together – being both the stranger transitioning from years of solitude to a crowded train and also the centre of Layton’s lie.

There are a lot of decent series out there at the moment, some with bigger budgets and flashier marketing – and certainly some potential epics on the horizon – but at the moment there’s nothing quite like Snowpiercer and the sheer scale of its ambition in such a compact environment… and sometimes that’s enough. 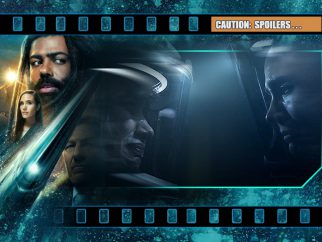 TRAILER: Reynolds and Netflix make time for ‘The Adam Project’…

The ‘Eleventh’ Hour. All good ‘Stranger Things’ must come to an end…