The CW's latest comics adaptation has all the familiar tropes - but also a strong actor in the lead and potential...

Naomi is a popular girl, loved by friends and fully-settled after being adopted as a baby and growing up in a loving home. She’s also devoted to the idea of Superman – the hero from the comic-books and well aware of the rumours that suggest he might exist for real. But when a super-battle comes to the streets of her town, she appears to be the only one who doesn’t see the Man of Steel. Instead, strangely dizzy, she faints and misses the entire battle.

By the time it’s over, people are already thinking this was a publicity-stunt rather than a real superhero encounter, but when they turn to Naomi as a source of information, she has no answers for them.

Instead she has questions. What happened to make her faint? Why were cameras on the main street deactivated? Why does she suddenly not need her glasses? And why does the local tattoo-artist seem to know more about her past than she does?

There’s no doubt that The CW‘s formula of putting young, attractive characters in angst-filled, fantastical situations has been a format that has paid dividends for years. While the trend on other platforms may have been to go dark, gritty and cynical to attract ever-more-demanding audiences, the persistent vivid colours, sunny disposition and matters of the adolescent heart have kept their place in primetime .

Naomi probably won’t excite those who prefer edgy material like The Boys, Peacemaker, Watchmen or a raft of boundary-pushing productions, but its depiction of a young woman who suddenly has to question herself and her history will likely resonate with the less-demanding but more-fickle youthful audience intended. And it’s not without some nice quirks along the way. Not that long ago, the central hero would have to be the outsider, the loner, the victim who rises above challenges and having proven themselves is embraced like Rudolph by their fellow reindeer. Instead Naomi is a reasonably well-adjusted teenager, popular with her fellow classmates, never short of romantic flirtations (from boys and girls), comfortable in her skin, understood (as much as they can) by her adoptive parents as well as being a self-respecting nerd who is fascinated by Superman. In modern life being a comic-nerd and being popular is not hard to balance, but it’s rarer to see tv shows accept that, though it could be going too far the other way and ticking-off a checklist of factors designed to entice.  Naomi, it seems, has the perfect wish-fulfilment world and as the intro unfolds, the audience might really suspect it’s too good to be true. It’s not – but it may be too good to last. But, of course, where would the drama be without something to mess it up?

The series, at least for its pilot (written by show-runner Ava DuVernay and Jill Blankenship and directed by Amanda Marsalis) manages to cope with the idea of Superman as both a comic-book character and just possibly a real hero. Port Oswego, Oregon,  is a town far, far away from the modern metropolis of skyscrapers that could ever be jumped in a single bound. For most of its population, ‘Superman’ is the guy from the printed page and if they hear the occasional stories or sightings of a ‘real’ caped alien going up, up and away, they shrug and file it under the kind of thing you’d see in the National Enquirer or on the cable tv supernatural reality shows that chronicle what supposedly happens somewhere else.  Naomi may run one of the internet’s most devoted Superman sites, but she’s also fully accepting that Superman might be just a myth… it’s simply that as an adopted child she finds a connection with the concept of building a life away from the birth parents she’s never known. So when a super-battle appears to be happening downtown, Naomi is the first one to race there to see if meets expectations.

That she totally misses the event is down to more than irony and bad-timing and though the pilot doesn’t get to fully explain exactly why that happened, it does take us to the point where  we and Naomi realise that there IS a reason and that there’s something genuinely very different about her. Though the show is grounded in suburban life, we now get the reversal of the usual CW concept. This will not be about an outsider trying to fit in, but an insider who needs to know how she got there. Perhaps that’s why the title of the show is her own name not the one of her eventual alter-ego.

Kaci Walfall, playing the title role, is great, balancing both the glamour and the nerdiness – the confidence of a girl who is doing well but with the normal doubts and moments of awkwardness along the way. Like Clark Kent, her over-sized glasses frame her face in a way that suggest deep thoughts and a studious nature, but the moment they’re taken off, she’s one of the gang, ready to party. It’s these two aspects that are knocked off-balance by the realisation that there’s something rather ‘super’ if not-yet-defined about her.  Naomi may be based on the concept created by Brian Michael Bendis and David F. Walker for DC Comics, but it follows the legacy of other screen heroines like Buffy, Sabrina and Nancy Drew, complete with a ‘Scooby-Gang‘ of close-knit friends willing to follow her lead and keep some of her secrets. It’s potentially Smallville, but with less baggage or defined lineage and, well, more potential.  Walfall dominates and the supporting cast will need some more fleshing out to really bring things together, but Barry Watson and Mouzam Makkar  – as her parents – are good (though the audience will probably be left with the impression that, with their connection to the local military, they know more than they are letting on). The unsettling presence of Dee (Alexander Wraith) and more menacing car dealer Zumbado (Cranston Johnson) indicate things will start to move quickly as Naomi uncovers the truth. Her social circle includes Annabelle (Mary-Charles Jones), a potential love-triangle between fellow military brat Nathan (Daniel Puig) and ‘townie’ Anthony (Will Meyers) with Camila Moreno’s Lourdes also showing interest.

Yes, there are moments when all its many shiny, vivid, colourful assets feel designed to blend a selection of pre-ordained demographically-important Tetris shapes, friends, situations and perfect smiles blueprinted in fine detail to succeed in addressing all the things that teenagers might want to see – race, sexuality, social-platforms and home-life are just the building blocks… but in building that foundation before soaring for the skies, its cast and smooth writing suggest that ‘safe‘ though it may be in its template, it has its heart and soul on its sleeve and that alone may likely keep it flying. 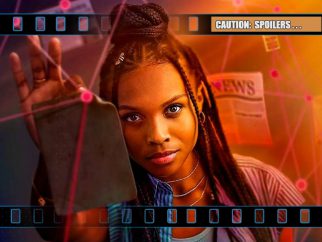